This doorbell is for folks who want to go full SimpliSafe 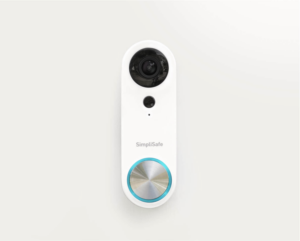 This is a fairly standard doorbell camera

After the success of the Ring Pro, it seems like every home security company and its dog has some kind of “doorbell pro.” SimpliSafe is no exception.

Here’s what you can expect from SimpliSafe’s pro doorbell iteration.

The night vision, two way audio, person detection, and pan and zoom are all pluses for us. These features will make it easier to catch folks on camera, speak to them through the camera, and focus on important details.

Still, this isn’t the longest feature list we’ve seen for a doorbell camera. The SimpliSafe doorbell doesn’t offer package detection, intruder deterrents, facial recognition, or any of the other features that we’re now seeing in top-notch doorbell cameras. So that’s a letdown.

But the Ring Pro, a popular doorbell choice, has comparable features, so a lack of bells and whistles doesn’t necessarily make this doorbell obsolete.

What makes this doorbell stand out? Its flexibility. The Video Doorbell Pro runs on anywhere from 8 to 24 VAC power, which means it’s compatible with both older and newer homes. According to SimpliSafe, it also comes with a wedge that will allow you to mount it at an angle, thus changing the field of view.

Let’s talk a little more about what you’re getting with this camera.

Many doorbell cameras now have person detection, and this doorbell is no exception. It senses both heat signatures and person-like movement to differentiate between human movement and other activity, like animals or branches waving in the wind. Your notifications will tell you when the doorbell senses a person and when it senses some other kind of motion.

Also, according to the SimpliSafe website, the doorbell ignores vehicle motion altogether. That’s super useful because it means you won’t get a notification every time a car drives by. But if you’re hoping to capture video of suspicious vehicles in your area, the Video Doorbell Pro is unlikely to catch them. Just something to consider.

The term “pan” is a little misleading in this case because the camera itself can’t physically move from side to side. But you can adjust your focus and zoom in digitally on video clips to focus on different items in the frame. (Coughlicenseplatescough.)

You’re not getting everything you could for the price, and you’ll pay extra for a subscription

SimpliSafe prices its doorbell at $169. That’s a similar price and value as other similar doorbells like the Ring Pro. But that doesn’t make it the best deal out there.

For instance, this doorbell can’t do nearly as many things as the Arlo Video Doorbell. The Arlo is $20 cheaper and offers a broader field of view, video calls, emergency alerts, and Google and Alexa compatibility. While a doorbell doesn’t have to do all those things to be functional, those additional features add a lot more usability.

Happily, if you try the SimpliSafe doorbell but don’t like it, SimpliSafe gives you up to 60 days to return it.

In addition to the up-front purchase price, you’ll need a video subscription for your camera. If you don’t get a subscription, you can technically still watch the livestream, but you won’t be able to save any clips. If you want to go back and rewatch something later, well, you can’t. So we strongly suggest investing in a subscription.

We think the Interactive Monitoring Plan, which includes monitoring for a SimpliSafe system plus unlimited cloud storage for up to 10 cameras, is the best deal. But if you don’t have a system or other SimpliSafe cameras, you’ll want the one-camera plan. At $9.99 a month, it’s a little more expensive than similar Blue by ADT, Arlo, and Ring plans, but it’s not highway robbery.

The Interactive Monitoring plan also comes with video verification. That means that if you’re using the camera alongside a SimpliSafe security system and the alarm goes off, SimpliSafe will check your video footage to confirm that something suspicious is happening. That can go a long way toward weeding out false alarms.

Everyone says something different about SimpliSafe’s camera plans. Even SimpliSafe itself has old support pages with conflicting versions of its plans.

To get the data shown in the table, we went through the website sales process to reach the plan comparison table shown to buying customers. We figured that’s the most accurate version.

There’s not much automation with this video doorbell

Your SimpliSafe Video Doorbell Pro will connect directly to a SimpliSafe home security system. When one of your SimpliSafe sensors picks up on activity, your doorbell camera will start recording.

Don’t have a SimpliSafe security system to go with your camera? In that case, you should still be able to check up on any other SimpliSafe products (the SimpliCam, the smart lock) alongside your video doorbell in the SimpliSafe app. But you won’t be able to connect the camera to third-party devices that work with SimpliSafe, like Alexa, Google, or August.

That means that you can’t set up much of a smart home using this device. You can connect other devices around the house (lights, locks, thermostats), but your doorbell camera will be the odd one out. It won’t be able to interact with the other products in any way.

So if you don’t have a SimpliSafe system and don’t plan on getting one, we generally wouldn’t recommend this camera in terms of home automation.

Ease of installation will depend on your previous wiring experience

While the SimpliSafe system is optimal for renters, the doorbell? Not so much. In this case, SimpliSafe eschews the stick-and-peel model for wires. That makes sense due to how doorbells operate, but it does make us wish SimpliSafe would create a more renter-centric door camera like Ring did.

It’s up to you to get this camera up and running. If you’re willing to pay $79, SimpliSafe will send someone to your home to install your SimpliSafe system for you. But you can’t get that courtesy for the video doorbell camera.

Here’s how you install the doorbell, based on information from SimpliSafe’s website. You’ll need a Phillips head screwdriver and a smartphone.

If this sounds intimidating to you (and if it does, we don’t blame you), we suggest you find someone with some doorbell experience to help with the install.

This doorbell is good, but it’s best for SimpliSafe users

If you have a SimpliSafe system, we recommend this camera above all others. Its connectivity to your existing system will offer a seamless home protection experience.

If you don’t have a SimpliSafe system, we would say skip this one. You can get something with more features that can actually connect to other smart devices for a similar price.

Features: This camera doesn’t have much razzle-dazzle, but it comes with person detection and in-clip pan and zoom features. There are no customizable motion zones, though, which is a thumbs down.

Pricing: This camera is reasonably priced, and the cloud storage subscription price is manageable too. You don’t have to get a cloud storage plan, but we recommend it. Our favorite is the Interactive Monitoring plan, which comes with video verification and monitoring for a security system.

Home automation: The SimpliSafe Video Doorbell connects to your SimpliSafe security system. But if you choose to use this smart doorbell as a standalone device, you won’t be able to connect it to other smart home products.

Installation: You’ll have to install this baby on your own. It’s not too difficult, but if you don’t know your way around a breaker, you might want to get some help.

If the SimpliSafe Doorbell Video Pro doesn’t have you jumping for joy, check out Ring doorbells or the Eufy doorbell. Or, if you want to learn more about doorbells in general before making a decision, browse our Smart Video Doorbell Buyers Guide.

Is your house ready for the SimpliSafe Video Doorbell Pro?

Video doorbells work best with a strong Wi-Fi connection. And you’ll get the most out of yours when you also have a good phone plan that allows you to check on your video stream whenever you want.

If you don’t have those things, allow us to make some suggestions.

These plans have unlimited data, which makes it easy for you to check your camera notifications no matter where you are.