You don’t need a gaming system to win big: stream live TV, record your favorite shows, and pay on a monthly no-contract basis with PlayStation Vue.

Overall Rating 3.5 out of 5
Price:
$39.99–$74.99
Channels:
49–90
Contract :
Month-to-month
Get 5-day Trial
https://www.reviews.org/tv-service/playstation-vue-streaming-service-review/
What is PlayStation Vue and is it worth the price? Read our review comparing channels, pricing, and more to find out.
September 20, 2019

PlayStation Vue (or PS Vue) is like the cheaper, chiller, more flexible cousin of cable. You get most of the same channels and benefits as you get with cable for a fraction of the fuss and a portion of the price.

PlayStation Vue also has more channels compared to other streaming services like Sling TV and fuboTV. There’s even a free, built-in DVR and lots of on-demand content like you would get from Netflix and Amazon Prime Video.

With PlayStation Vue, you won’t have to sign up for yearly contracts with early termination fees (ETFs), which can be $240 or more from traditional cable providers. You won’t need to lease equipment or pay hidden fees, either, but the streaming service may not have enough of your favorite channels.

How much is PlayStation Vue?

PlayStation Vue first plan starts at $49.99 per month, which is a decent price for such a solid selection of entertainment. Here’s the whole package layout.

Price and channel inclusion vary according to location.

Wait! I’m still not sure which PlayStation Vue plan I want!

It’s okay, we’ve got the specifics:

We’re pretty impressed with the offerings from PlayStation Vue, especially since the cheapest plan (Access) has the bulk of popular channels like AMC, FX, ESPN, ESPN2, Cartoon Network/Adult Swim, Fox News, CNN, and HGTV. With the highest–tier package having 89+ channels, it’s not the highest channel count among streaming services, but PlayStation Vue doesn’t load their count with music channels or other filler we don’t care about.

We’d guess that most people would get the majority of what they want to watch by getting the Core package and adding on HBO or the Sports Pack. Personally, as long as we get Rick and Morty, Game of Thrones, and the NBA finals and NFL playoffs, we’re good. 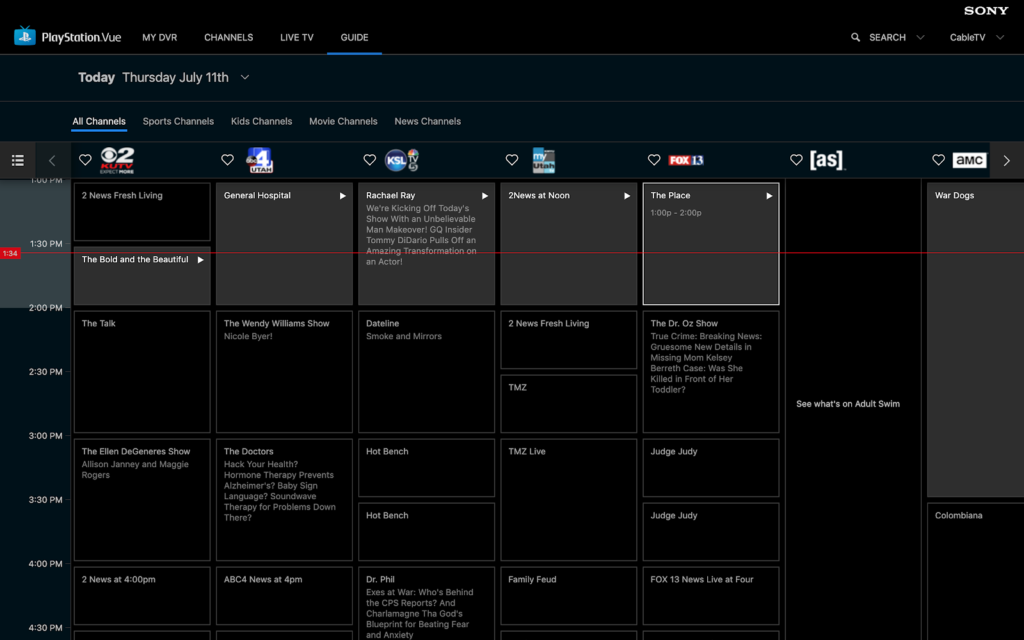 The highest-tier package, Ultra, has 101+ channels. That isn’t the highest channel count among streaming services, but PlayStation Vue doesn’t load their count with music channels or other filler we don’t care about, so that number means more.

Then again, PS Vue is missing these channels:

History fans, Key & Peele addicts, and Sesame Street lovers will be disappointed with PS Vue, unfortunately. Can you forgive PS Vue for missing these channels? That’s a question only your entertainment-loving heart can answer.

But most people can get most of what they want with the Core package and simply adding on HBO or the Sports Pack.

Personally, as long as we get Rick and Morty, Westworld, the NBA finals, and the NFL playoffs, we’re good. But if you want to see what else is out there, see how PlayStation Vue stacks up against other heavy hitters, like Hulu, YouTube TV, and AT&T TV NOW.

Okay, so no one, not even PlayStation Vue’s own website, gives us a full list of all PlayStation Vue’s local affiliates. (Affiliates are local stations that have made a deal with a streaming service for access to its broadcast.)

Take all of PlayStation Vue’s FOX, ABC, CBS, and NBC affiliates together and you’ve got over 600 affiliates. That’s better than some streaming services, but not as good as others. So PlayStation gets a solid B+ for local channel connectivity.

The free 5-day trial is the most reliable way to check for your local channels. Just remember to cancel before five days are up if you don’t want to start a subscription.

An antenna is like a special membership that will get you access to all of your local channels.

Most streaming services know people will pay extra for premium channels. The trick with PlayStation Vue is to know which ones you want and find the best bundling deals and discounts.

We like to save money, and we figured you probably do too. So here’s some deals to check out.

The PS Plus Subscription comes out to about $5 per month, and it will get you discounts on the HBO + Cinemax bundle, the EPIX Hits + SHOWTIME bundle, SHOWTIME, EPIX Hits, and Hi-Yah!

If you get more than a few of these bundles, you’ll be saving more per month than your PS PLUS subscription costs per month. That’s a lot of value for the price.

If you want only one premium channel (sorry, PS Vue doesn’t offer STARZ), then you can do that too.

The Core Package covers most of your major and minor sports channels, from the NFL Network to the Tennis Channel. That combined with the unlimited DVR storage makes PS Vue streaming ideal for dedicated-but-busy sports fans.

On top of that, there’s the $10 per month Sports Pack, available with the Core package or higher, that includes the following:

If that’s not enough sports for you, we recommend the FOX Soccer Plus add-on for $14.99 per month.

PlayStation Vue is clearly gunning to be the cable replacement for sports fans, and it does it well—for the right price.

PlayStation Vue is on par with other streaming services like Sling TV and AT&T TV NOW when it comes to add-ons. Apart from all those premium channel add-ons and the sports pack, PlayStation Vue offers the following:

This way, you can take the extras you want and leave the ones you don’t. But how are you going to save the live programs that are on during your weekly Pilates class? That’s what the DVR is for.

You just need to add a live program to “My DVR” for it to automatically record. There’s no limit to the number of recordings, but whatever you save will disappear after 28 days, so don’t forget to get back to it.

Still, your family may be saved from the crisis of scheduling a family visit over the playoffs or the little ones missing the new Miraculous Ladybug episode.

You can register up to five devices; any more than that and you will have to select a device to unregister. You also get five simultaneous streams. Compared to DIRECTV, Sling TV, and fubo, PlayStation Vue has the highest number of available devices and streams. Mobile devices will have out-of-home network restrictions when on-the-go. It bears repeating: although it’s a common misconception, Vue works for more than PlayStation consoles.

The following devices will work for PlayStation Vue:

And of course, you can always watch on the PlayStation Vue website, which is our preferred at-home method—We use our laptops so much, it makes it easy to plug in a HDMI cable to the big-screen TV, turn on Vue, and then veg out for the night.

Is it pretty off-paper too? Yes.

PlayStation Vue isn’t the cheapest streaming service, but it is one of the most well-featured and reliable. The video quality, dashboard, and channel guide rarely disappoint. (Basically, we’re saying cable’s cousin is kinda cute.) 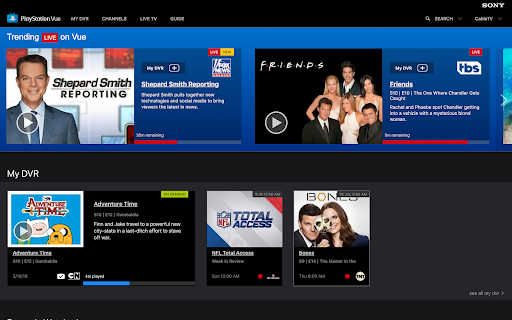 The PS Vue’s library interface is one of the best ones we’ve tried. It’ll work on your favorite web browsers like a charm. Kudos to PlayStation’s design team—they really made it easy for users to get what they want fast.

We immediately noticed the option to add favorite channels and favorite shows, which is much more helpful than browsing the channel guide or searching for your show over and over.

PS Vue’s interface displays a show’s progress with a red and white bar so that you know at what point you’re tuning in.

And then there’s the Sports section: the coming week is broken down into an easily read snapshot, organized by sport, leagues, and teams. You can even toggle displaying scores on and off in your settings—a nice extra feature for sports fans.

PlayStation Vue is setting a standard for an organized, user-friendly streaming platform. Other streaming services should pay attention.

Special shoutout for the wide variety of closed-caption settings from PS Vue! We like seeing companies that make an effort to provide captions, but PS Vue also cares about how its captions are displayed.

Unlike fuboTV’s captions that take over half the screen, PS Vue’s captions can be adjusted for font size and style, as well as opacity, color, and background size—awesome! There is no way your nana can’t see those captions now.

PS Vue’s watching window isn’t anything new, but it does have nuances that streamline the experience. In the top-right corner, you’ll see the following: 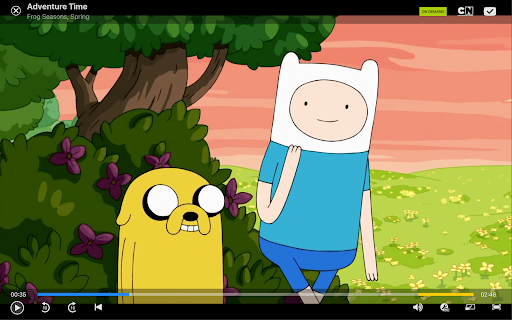 The standard playback controls are there:

Unfortunately, live channels mean there is no safe haven from ads, not even on the DVR. You won’t be able to skip commercials, even with on-demand content. That said, you won’t get more commercials than traditional cable.

Is PlayStation Vue compatible with my streaming device?

PlayStation Vue is compatible with almost any streaming device, not just PlayStation consoles.

The following devices will work for PlayStation Vue:

Can I watch PlayStation Vue at my friend’s/family’s house?
PlayStation Vue doesn’t work across multiple IP addresses, meaning you can’t log in from someone else’s device outside of your home.

It also tracks your ZIP code to make sure you’re in your home network—which is kind of a bummer, considering how easy it is to pull up something like Netflix on someone else’s TV.

How many devices will PlayStation Vue let me watch with at once?

With PS Vue, you’ll get a max of five simultaneous streams. That’s probably enough for your whole family. (Just be sure you have at least 30+ Mbps of internet bandwidth.)

Mobile devices using the PS Vue app will have some out-of-home network restrictions when you’re on the go and a couple other little rules (like no using two PS4s at once).

Do I have good enough internet for streaming?
You don’t want to pay a monthly subscription fee only to have your streaming interrupted by a failing internet connection. If you’re looking for internet tips, see our guide to the best internet speed for streaming. We can help you find the best router too.

We recommend PlayStation Vue for those looking to ditch cable and satellite TV providers in favor of a convenient, no-contract live TV option.

With PS Vue, you can do any of the following:

PlayStation Vue offers straightforward plans and high-quality usability, two things missing from other streaming services. If you’re willing to pay a little more for convenience and a cable-like channel selection, you’ll like PS Vue. Sign up for a 5-day free trial here.

What about other streaming services?

The PS Vue plans are way more straightforward than the plans of other popular streaming services. Trying to figure out the differences between Sling Orange and Sling Blue or the channel lineups of DIRECTV NOW can be tricky.

What do you look for in a streaming service? Have you tried PS Vue before? Let us know in the comments!