We compared all of Twigby's cell phone plans in terms of price, data, and performance. We found Twigby is best for those who don’t need a ton of data.

We like to put it all up top for our readers. So here’s the deal with Twigby: you’ll get super-cheap and customizable cell phone plans. But you’ll lose out when it comes to data, speed, extra features, and phone selection.

Twigby will be the perfect cell phone carrier for some casual users. But it’s definitely not for everyone. Read on for our detailed review to see if Twigby is right for you.

What to look for in a cell phone plan

Let’s go over a couple of basics before we jump into this review. How do you actually know if a cell phone plan is right for you? These are a few factors to keep in mind.

Cheap, flexible, and easy. If that describes your ideal cell phone plan then you should definitely consider Twigby.

Twigby is a mobile virtual network operator (MVNO). That means it actually uses other companies’ cellular networks to provide service (in this case, it uses both Sprint and Verizon). This arrangement allows MVNOs like Twigby to cut costs, which is definitely the thing we love most about the company.

The priciest plan that Twigby sells is just $17.50. In fact, every plan the company offers costs less than $20 a month. This easily makes Twigby one of the cheapest carriers on the market.

It’s simple to customize the type of cheap plan you want with Twigby. The company’s website has a handy tool to select the amount of minutes and data you’d like. It looks like this. 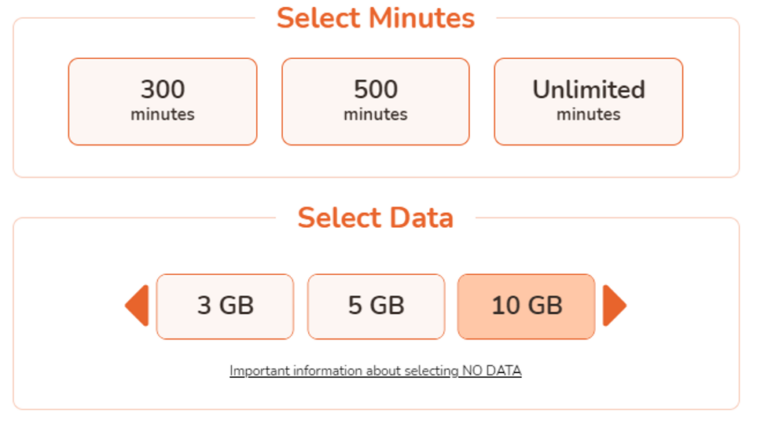 If you select the unlimited talk, text, and 10 GB of data option you’ll still only pay—you guessed it—less than $20. That’s a killer deal, even when you compare it to other discount carriers.

Once you order online, you’ll get your Twigby SIM card in the mail. Easy peasy, lemon squeezy.

Want to learn more about MVNOs?

Check out our review of all the best MVNO carriers to see where you can find the best deals.

As we said above, MVNOs lease bandwidth on other companies’ cellular networks. And Twigby actually uses two different networks to give its customers coverage: Sprint and Verizon.

You might be like, “Sprint? Didn’t it just get bought out by T-Mobile?” Yes, it did. But the Sprint’s network is still in place and that’s what Twigby uses. (Twigby customers may actually see an expansion of their network as T-Mobile and Sprint integrate their infrastructure).

Most of the time Twigby customers stay on Sprint towers. But if they’re in an area where Sprint doesn’t have good service, they’ll automatically switch over to Verizon’s towers. That’s good news, since Verizon has the best coverage in the country.

We’ll talk more about all of this in the coverage section below.

You don’t end up with some of the cheapest plans on the market without taking a few shortcuts. Here’s a look at the parts of Twigby that some customers may find frustrating.

Having a smartphone without data is kind of like having a sports car without gasoline: it kind of takes the fun out of things. You can’t stream music, watch TikTok videos, send GIFs, or post embarrassing selfies on Insta without data.

This is why so many companies are prioritizing unlimited data plans. And unfortunately, Twigby doesn’t have one.

The most data that you can get in a month is 10 GB of 4G LTE data. That’s about enough to stream a whole season of The Crown. While that may sound like a lot, it’s not nearly enough for gamers, influencers, professionals, and other heavy users.

How much cellular data do you really need?

Read our nifty guide to make sure that you have enough data (but not way too much).

Because Twigby is borrowing bandwidth from Sprint and Verizon, its customers can get kicked to the back of the line, so to speak. That means that during times of heavy use, Twigby customers may see their data speeds plummet to a snail’s pace.

For some folks this won’t be a major issue (you are paying less than $20 a month, after all). But for the rest of us who rely on our phones for basically everything, deprioritization can be a total dealbreaker (“It’s not you Twigby, it’s me”).

Twigby is affordable, but maybe not as much as it seems. The company’s advertised prices are often promotional deals. Many of these prices will increase after the first six months. So, be sure to read the fine print before you sign up!

How does Twigby compare to other discount carriers?

We went on and on about how cheap Twigby’s plans are. But how do these cheap plans compare to other discount carriers? Quite well, actually. Just take a look for yourself.

You can add a bunch of extra lines, but you won’t actually save money on them
Pros
Cons

What we like about Twigby’s family cell phone plans

One of the easiest ways to make your cell phone bill cheaper and easier to manage is to bundle together with your family. (Plus, what would a family reunion be without a little bickering about which sibling uses up all the shared data?)

We’ll be up-front about it: Twigby’s family plans have some major flaws (they aren’t actually cheaper, for one). But there are a few things the company gets right. Here they are.

You can add nine other people to your Twigby account. So go ahead, branch out: call up your siblings, aunts, uncles, mother-in-law, college roommates, ex-boyfriends, and anyone else you want on your plan. It’s easy to add extra lines!

Anyone who does join your account can design their own plan. It’s like ordering your own dish at a restaurant: you can be on an unlimited talk and text plan with 10 GB of data (chicken fried steak with a side of mashed potatoes), while your spouse is on a plan with 500 minutes and 1 GB of data (kale salad).

Want a plan that’s perfect for your kids?

Every kid wants a cell phone. But finding a plan that’s good for your little ones—whether it’s affordability, parental controls, or data limits that you care about—is hard. So we’ve gone ahead and laid it all out in one place. Check out our review of the best cell phone plans for kids.

The vast majority of people get family plans for one reason: they want to save money. And many family plans will save you a ton of dough. Just check out the ones that Visible Wireless offers, for instance.

But Twigby’s family plans won’t save you any cash. You’ll pay the same amount you would if each line was separate. That means the only real benefit is that you can pay for every line with a single bill.

We already talked about Twigby’s limited options for data. This problem is just compounded when you add extra lines. Even if you’re okay with just a couple GBs of 4G LTE data, there’s probably someone in your family who wants much more.

How do Twigby’s family plans compare?

While it’s true that Twigby’s family plans aren’t cheaper than buying multiple individual lines, they’re still cheaper than the competition’s plans. Just look at this comparison of the cheapest family plans with unlimited talk and text plus 5 GB of data per line.

Twigby runs on both the nation’s worst and best networks

Twigby’s service operates on two different networks. Customers will primarily be on the Sprint network. But, when they are out of Sprint’s service area, they’ll be switched over to Verizon.

This isn’t a terrible setup. Sprint’s network is pretty strong in major metropolitan and suburban areas, but Verizon’s network has far greater reach. That means Twigby customers should rarely be without at least a few bars of service.

Check out these coverage maps to see how the two networks look in your area.

If you want to learn more about coverage and data speeds read our review of all the major cellular networks.

If you recently splurged on a brand new Galaxy S20, don’t worry, you’ll be able to bring your phone with you when you sign up for Twigby.

If you want to bring your own device (BYOD), use Twigby's compatibility checker first to see if your phone will transfer.

But if you’re looking to buy a new device from Twigby you may find yourself frustrated.

Unlike other carriers, Twigby doesn’t sell the latest flagship devices. No Galaxy S20 or iPhone 12. That said, you can get a decent deal on some perfectly good devices that came out in the last few years, like the Google Pixel 3a XL. Here’s a look at all of the phones that the company sells.

It’s hard to give an exact grade to Twigby’s customer service, but we can see that the company’s mobile app retains a 3.1-star rating in the Apple Store and a 3-star rating on Google Play. That’s not too impressive, but it could be worse. So maybe we’ll call it a C-minus.

Recap: Is Twigby right for you?

Let’s do a super short recap of all that, in six words: cheap, customizable plans but “meh” performance. Now, let’s do a slightly longer recap of this Twigby review.

If you’re willing to sacrifice a bit on quality to get one of the cheapest cell phone plans on the market, then go ahead and sign up for Twigby. But if you’re looking for an unlimited, high-speed data plan then you’ll need to go elsewhere.

To write this review we looked at every single Twigby cell phone plan on the market. We analyzed these plans based on a number of factors, including price, data, coverage, and network performance. Then we compared Twigby’s offerings to those of similarly priced carriers to give our honest evaluations and recommendations.