Is the Book Better Than the Movie?

90% of the time, the answer is a resounding yes

It’s an age-old debate, which is better, the book or the movie? We analyzed over 1,100 books and compared them to their movie adaptations to see which fans prefer.

From Harry Potter to The Lord of The Rings to James Bond, we took a deep dive in an attempt to solve the book vs. movie debate.

Once you’ve finished comparing, be sure to check out some of the top streaming services to see where you can catch up on these great films.

Which is better, the book or the movie? 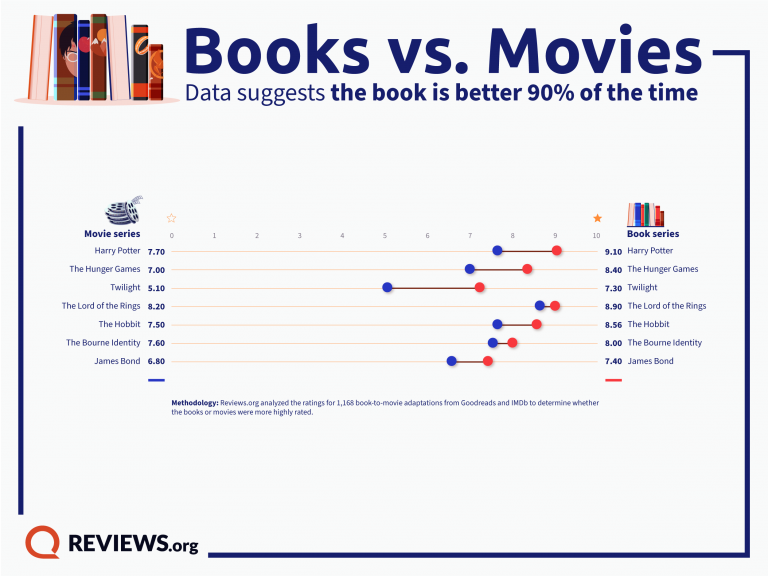 The TL;DR is that the book is almost always better than the movie.

In our review of over 1,100 books, we found that the book was rated higher than the movie 89% percent of the time—that’s 9 out of 10 book-to-movie adaptations!

Readers also came out in higher numbers to rate their favorite books. Most written works had over 265k ratings, while most movies had only 109k ratings.

Curious what books made it to the silver screen more than others? James Bond is the clear winner in this department, having 15 more movies than the next runner-up, Harry Potter.

Let’s dive into some of the most popular book-to-movie franchises to see how they fared—the ultimate battle of Hollywood versus the mighty word.

The original Harry Potter series was made up of seven books but translated to eight movies, as the final book in the series, Harry Potter and the Deathly Hallows, was split in two.

The highest scoring Harry Potter film was Harry Potter and the Deathly Hallows: Part 2 with a rating of 8.1/10, but that didn’t even come close to the book series.

When it comes to the book series, the lowest-rated book, Harry Potter and the Chamber of Secrets, scored 8.9/10.

Lord of the Rings

There is one ring to rule them all, but Sauron didn’t go to Jared to get it.

From The Lord of the Rings to The Return of the King, none of J.R.R. Tolkein’s books scored below an 8.7 rating—that’s quite an impressive feat!

While nearly all of Tolkien’s books were beloved more than the films, The Lord of the Rings: The Fellowship of the Ring did score an 8.8, while the book scored an 8.7. These two titles came very close, but we need to give it to the film for this one.

In another creation of J.R.R. Tolkien, we dive into a world of fantasy with The Hobbit. Originally a single book titled, The Hobbit, or There and Back Again, the book was expanded into three modern films.

When it made its way to Hollywood, The Hobbit became a trilogy, splitting into An Unexpected Journey, The Desolation of Smaug, and The Battle of the Five Armies.

There should be no surprise that while the book scored a rating of 8.6, the average film score was 7.7—an admirable effort, but still not better than the books.

No, this series isn’t about a delicious meal; the hunger within the series’ name refers to an annual event in which children fight to the death—harsh.

Reviews found all of Collins’ works to be rated better than the movie series with the last book scoring 1.5 points higher than the film adaptation.

While both the books and films served as a cultural phenomenon, critics didn’t hold back any punches. None of the movies scored above a 5.5 rating with the worst film, New Moon, scoring only a 4.7.

If you’re looking for a romance with a teenage vampire or werewolf, you’re likely to find a better experience within the books.

To viewers of the films, Matt Damon is the spy-gone-rogue, Jason Bourne, in Robert Ludlum’s series of heart-pounding adventures, but the series started on paper.

Originating in the 1980s as a series of novels, Ludlum’s series made it to the big screen in 2002, introducing us all to Operation Treadstone.

Even if you’ve seen the movies, you’ll want to pick up the books as they all score higher than their film counterparts by an average of 0.4 points.

This martini-drinking man needs no introduction. James Bond is quite simply the world’s most well-known spy, which considering his occupation probably isn’t an advantage.

British writer, Ian Fleming, brought the character to life in 1953 within his novel Casino Royale. Since Bond hit the silver screen in 1962, there have been over two dozen films produced with the latest actor to portray the spy being Daniel Craig.

While the majority of Fleming’s novels were found to be better than their film adaptations, three films stood out with higher scores: Casino Royale, Goldfinger, and The Spy Who Loved Me.

Grab that book and start reading

Sorry movie-goers, when it comes down to an analysis, the majority of books score higher than their film adaptations. It appears readers win this argument over film buffs.

Then again, who says you can only enjoy your entertainment a single way? Work your way through a series of novels, then hit up Netflix to watch the latest adaptation.

If you find that your movie-watching experience isn’t streaming so smoothly, you may also want to check out the best internet providers for a more reliable connection.

To determine whether the books or movie adaptations are better, we sourced ratings and lists from Goodreads. To compare, we sourced movie ratings from IMDb.

After removing duplicate titles, we normalized the Goodreads ratings on a 1-10 scale and sourced the movie ratings from IMDb to compare.

This analysis was conducted by Reviews.org and is in no way sponsored, endorsed, administered by, or associated with any of the entities listed above or their affiliates.