How to Watch the 2021 Grammy Awards

The Grammy Awards are in for a lot of firsts this year: the first mostly-virtual show, the first time the show has been delayed due to a pandemic, and, most importantly for some dedicated fighting fans out there, the first time global pop phenomenon BTS is up for a nomination.

Here we’ll tell you how to watch the history-making show.

The 2021 Grammy Awards will air on CBS on March 14th at 8 p.m. Eastern time, so ready yourself with your favorite salty snack and sparkly beverage, the red carpet rolls on!

How to watch the Grammys on mobile

You’ll need the Paramount+ app. CBS has a regular ol’ free service that lets you watch TV episodes the day after they air, but that’s not good enough to see the Grammys live! In order to watch the awards live on mobile, you’ll need to subscribe to the Paramount+ streaming service, which costs either $5.99 or $9.99 per month, depending on which plan you choose.

Paramount+ offers a one-month free trial, so you can skip the fee as long as you remember to cancel your subscription before the trial’s up.

How to stream the Grammys

If you have a live-TV streaming subscription, like YouTube TV or Hulu + Live TV, then you can watch the Grammys there as long as your service supports CBS live through your local network.

Your local network will be called something other than just “CBS,” so you might have to Google the name if you don’t already know. (I’m speaking from experience here.)

All of the listed live-TV streaming services have free trials you can use to watch the Grammys (if you haven’t used one already), but double check that the service you choose covers your local CBS network.

How to watch the Grammys at no cost

These are the easiest ways to watch the Grammys at no cost:

But if you don’t have an antenna, you’ve maxed out all your free trials, or you’re just reading this now, two minutes before Jeon Jungkook is scheduled to sing, “‘Cause ah-ah I’m in the stars tonight,” then there’s always Twitter. Search the #grammys hashtag and you’ll probably find someone linking to a livestream.

Enjoy the show and 화이팅!

Grammy Nominees with the most streams on Spotify

Ready to guess who will take home awards at the Grammys this year? Spotify stream data might give you some hints.

The Recording Academy has never been, uh, shall we say, objective about who gets nominated for (or wins) Grammy awards, but popularity often plays a role.

And if Spotify streams have anything to say about it, then there are some clear frontrunners.

We didn’t look at every category associated with a Grammy award, but we pulled Spotify data for some of the biggest performance categories. Check out the rankings for these big-name nominees.

Record of the Year Nominees 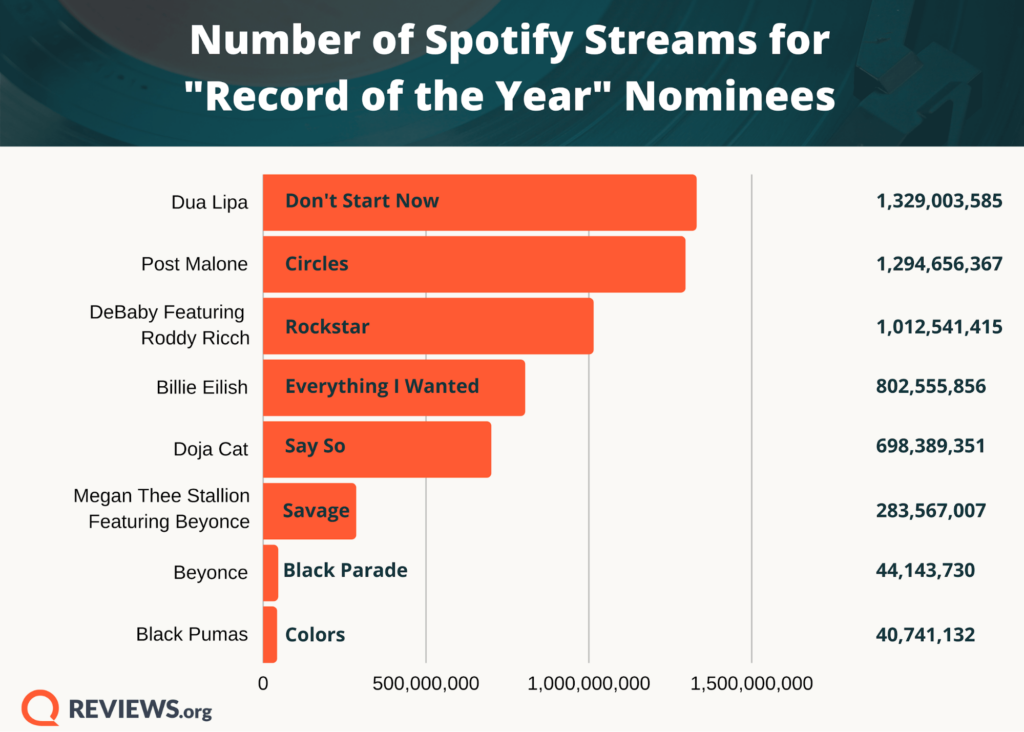 Dua Lipa’s slightly in the lead for one of the Grammys’ biggest awards for her recording of Don’t Start Now. This isn’t her first time at the show—she’s won two Grammys before. But this is the first time she’s been nominated for Record of the Year.

A notable shout-out goes to Megan Thee Stallion, who’s a first-time Grammy nominee but has noms in three other categories along with this one. 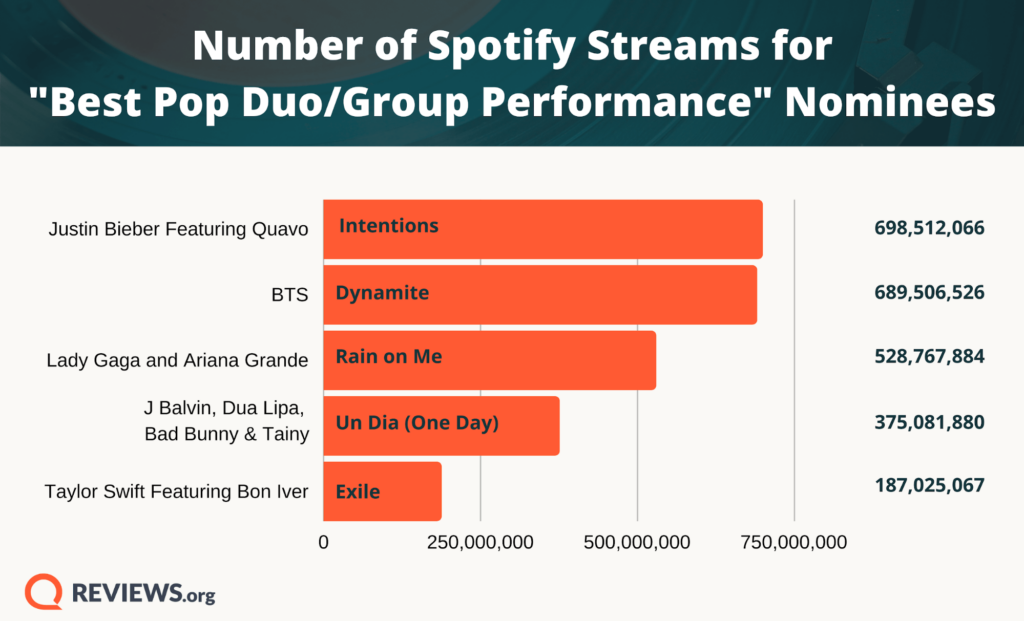 This is it, folks. The big one. No, not the biggest award, just the nomination category with the world’s biggest pop group, BTS (who really should have been nominated for the biggest award, but life goes on). BTS’s killer performance for their hit song Dynamite is taking its shot at a Grammy. The baepsaes are here to slay.

Justin Bieber’s song, Intentions, leads out on Spotify streams by just a smidge, but if you know anything about BTS’s fandom, ARMY, then you know the real buzz is all about these seven boys from South Korea finally getting their shot at that sweet-as-Suga  trophy. We’ll see Bangtan on the Grammy stage for the third time this year—and this time not to present. 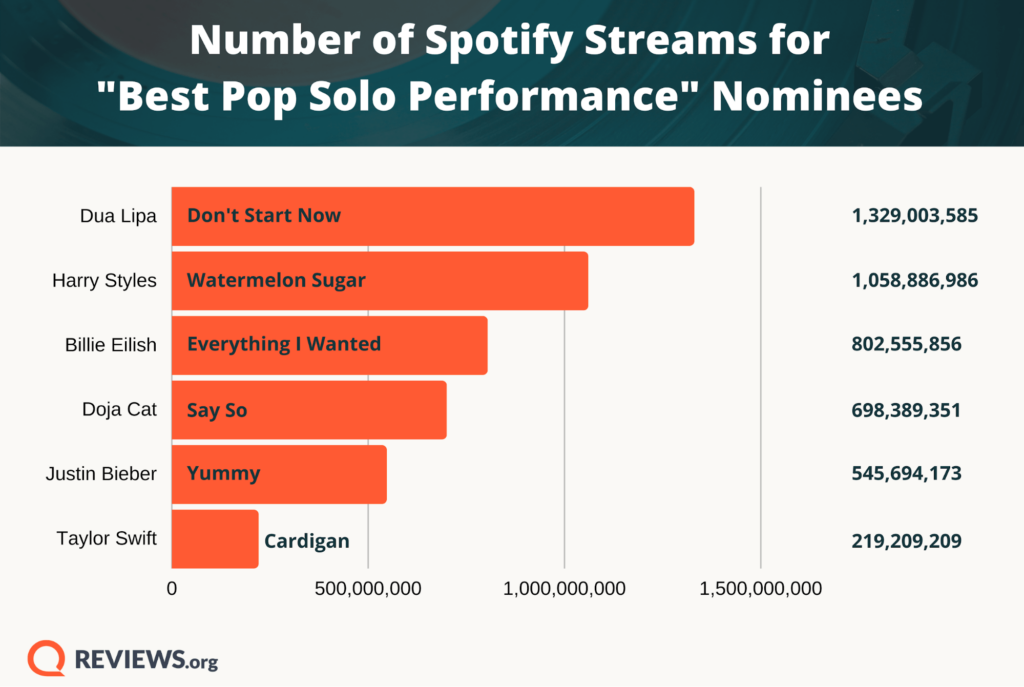 Spotify listeners really dig Dua Lipa’s Don’t Start Me Now, and so does the Recording Academy judging by the song’s three nominations. 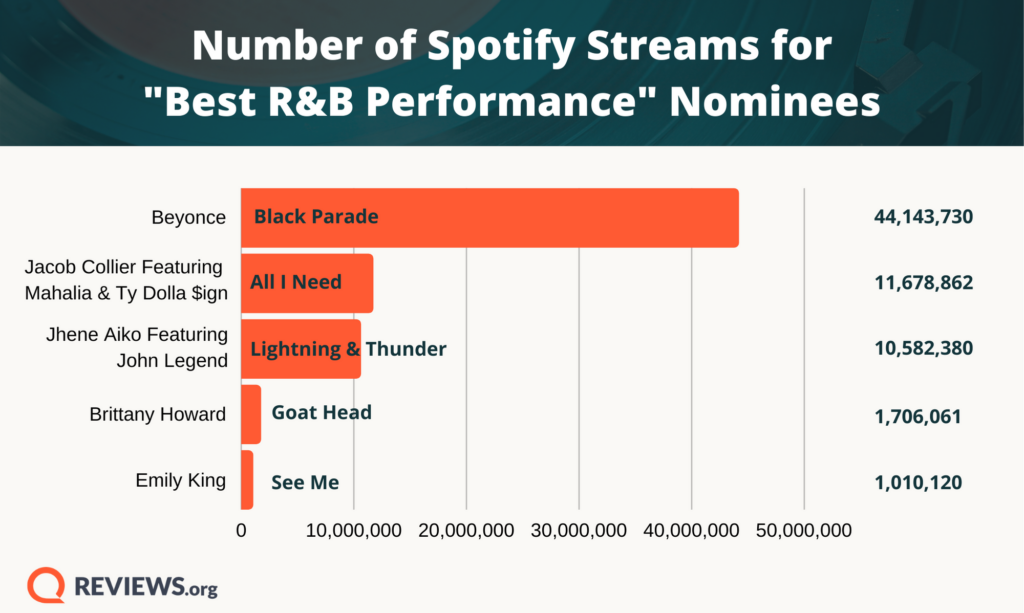 It should be no surprise to anyone that Queen Bey tops the R&B list with over 44 million streams of her song Black Parade. If Beyoncé takes home the award for Best R&B Performance this year, it will join the 24 other Grammys she’s already won. We hope she has a big enough trophy case.

Also, a shout-out to The Weeknd, who’s not on the list but really should’ve been nominated in this category and a dozen others. 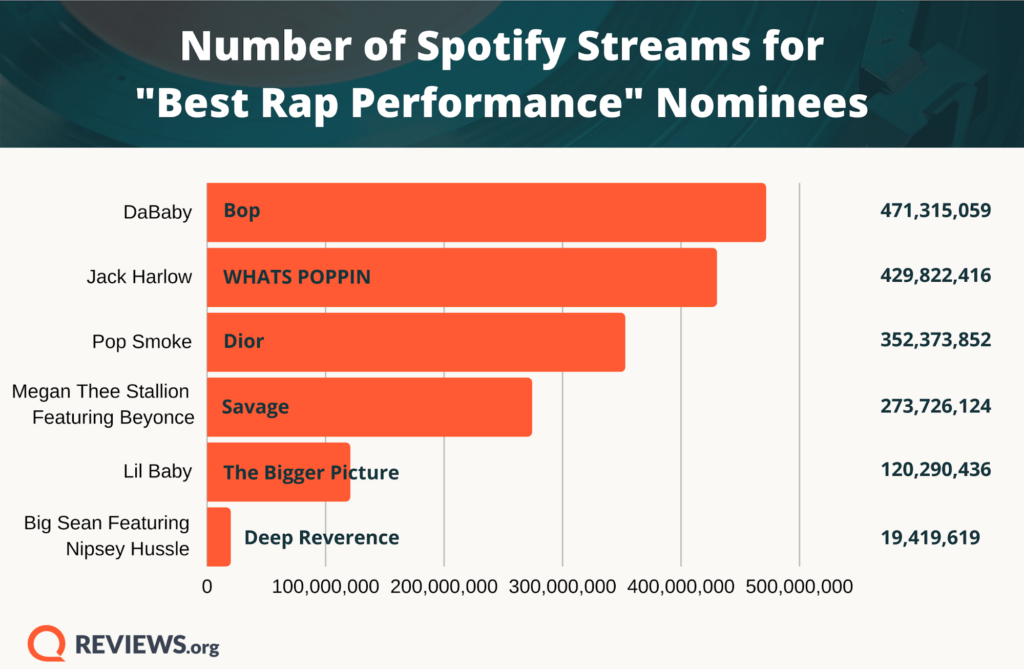 The Recording Academy doesn’t have a great track record with recognizing rap artists, and it’s safe to say there were some major exclusions from the rap category nominations this year, such as Lil Uzi Vert. But we’re happy to see Megan Thee Stallion show up in multiple categories. The TikTok trends know what’s up. 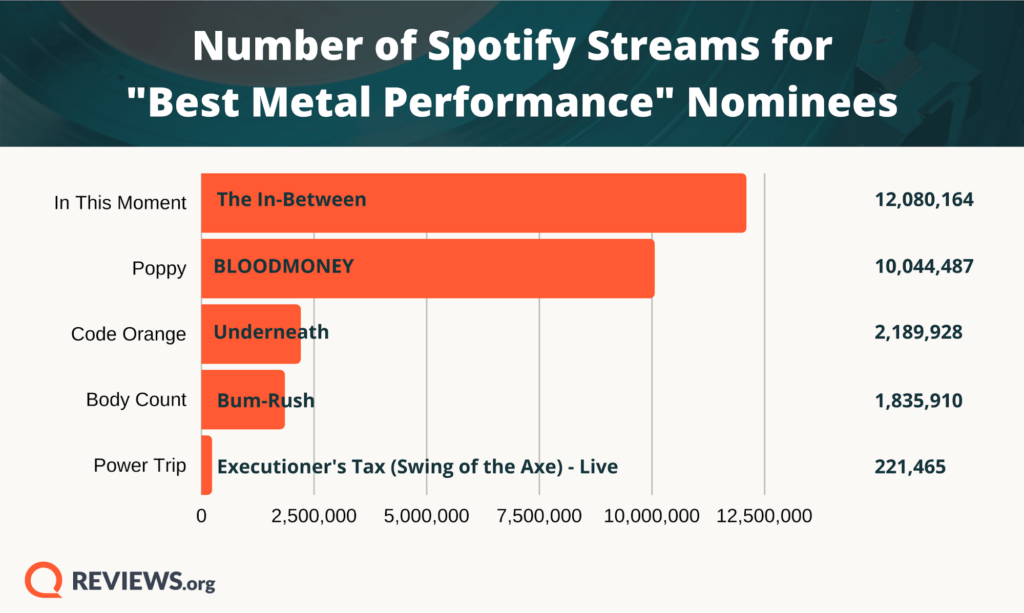 This is the LA-based metal band In This Moment’s first Grammy nomination, and it’s about time. Spotify listeners have streamed their song The In-Between more than 12 million times, and you should watch the music video for the visceral apocalyptic visuals and sapphic pagan vibes. 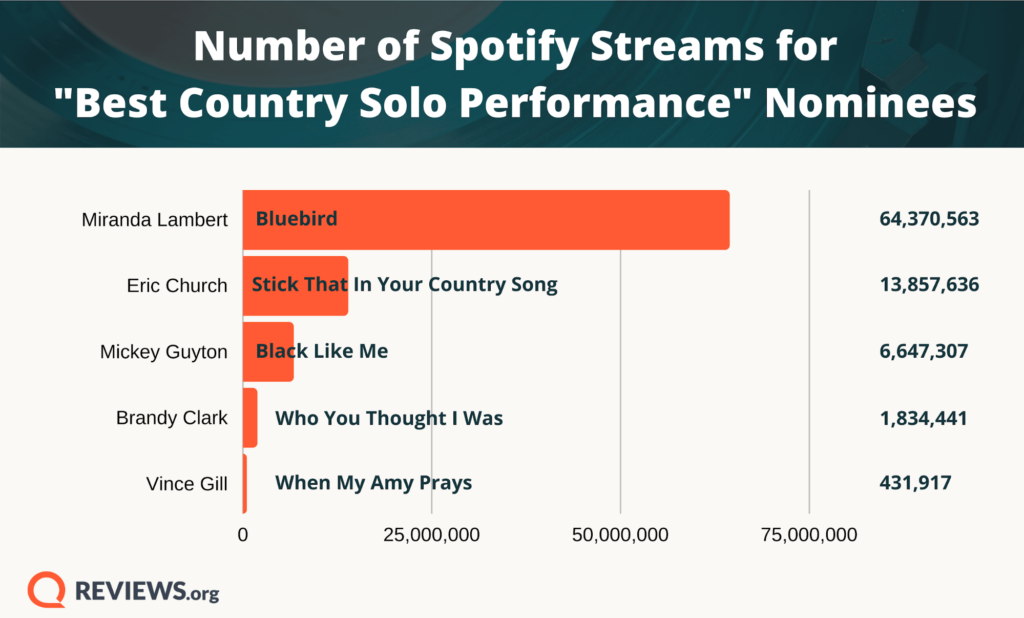 The Spotify streams make Miranda Lambert’s Bluebird seem like an obvious Grammy favorite. It leads out over Eric Church’s Stick That In Your Country Song by more than 50.5 million streams.

If she wins the Grammy, then maybe Miranda Lambert will stick that number in her next country song. 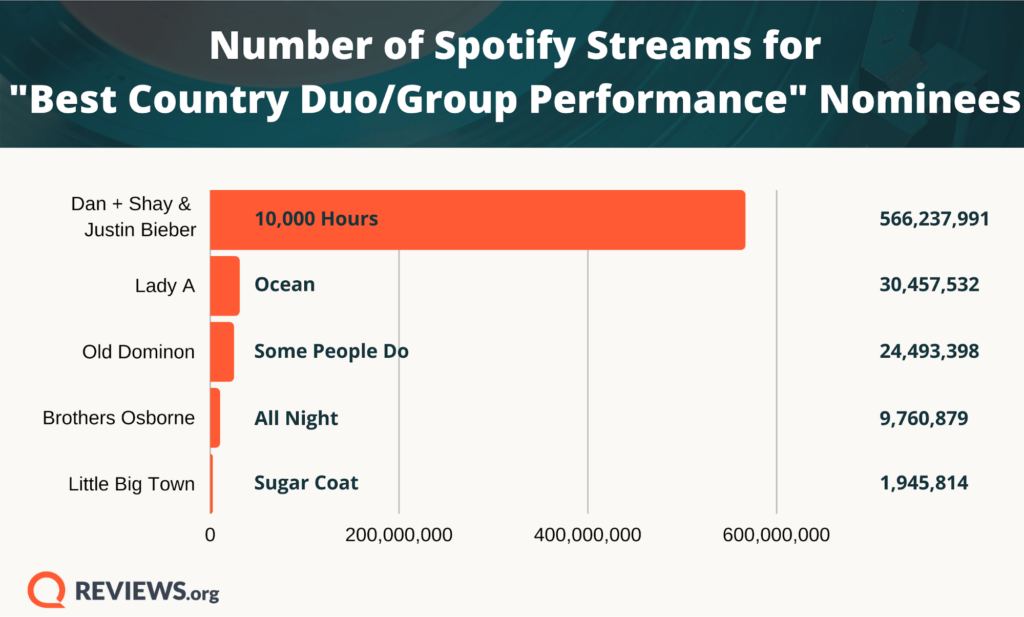 The Grammys will air on March 14th at 8 p.m. Eastern. Tune in to find out if the Spotify streams have any bearing on who wins the actual award.

We then used the Spotify library to determine the number of times the title has been streamed, or played on the music streaming service.

We then analyzed the data according to which nominees had the highest number of streams.