Verizon streaming is as consistently awesome as its coverage

If Reviews.org were a high school, Verizon would be the valedictorian. It holds the coveted positions for Best Coverage, Best Unlimited Plan, and has a rare 4.5/5 stars rating on our review. That’s like getting straight A’s in honors classes and still being the highschool quarterback somehow.

Well, let’s peak under the hood and see if we can find some dirt on the golden child of wireless networks. If Verizon’s streaming quality is as impressive as its other features, it may need to be bumped up to a full 5 stars on our review.

What are we looking for?

Let’s do a little latency blind experiment to start things off. If we line up three phones on three different networks, streaming the same baseball game at the same time, which stream is the first to show the baseball hitting the catcher’s mitt after the pitch? This is fun, right?

The bottom phone (and the winner) is on an AT&T connection, the middle phone (in second place) is on a Verizon connection, and T-Mobile on the top comes in last place. Actually, by the time the T-Mobile stream finally throws that first pitch, AT&T has already moved on to the next pitch. See? Latency is interesting!

What is considered good latency?

On a 4G connection, streaming latency is usually between 25 and 60 seconds. The closer you are to 25, the better.

YouTube TV will be our streaming service of choice because it provides live latency stats like the one you can see below. 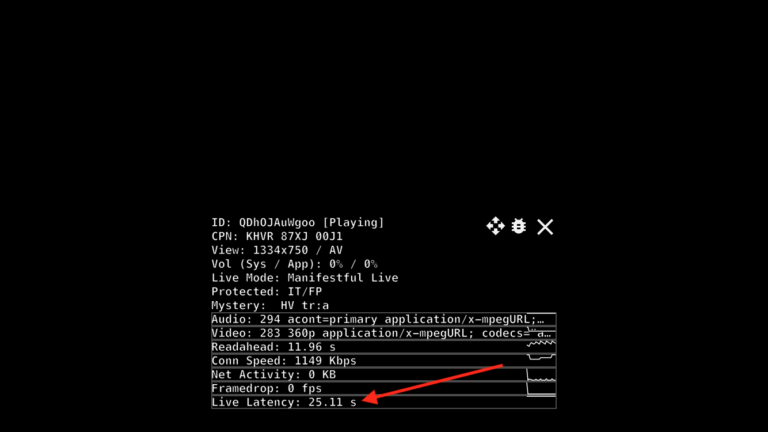 What are Verizon’s advertised speeds?

According to Verizon, its 4G speeds range from 5 and 12 Mbps, which is a sandbagging answer if I’ve ever heard it. Most 4G data speeds should range between 12 Mbps and 50 Mbps, so Verizon has really set itself to exceed expectations here. We sampled thousands of wireless users and the average Verizon user experiences a 32.2 Mbps data speed. That high of a data speed should translate to a low latency while streaming.

The following streaming tests took place in northern Utah. More specifically, from a house in the suburbs, a crowded grocery store, and a couple miles into a remote hike.

Here are the details on how all the specific tests went.

Streaming test from the suburbs

Verizon maintained an impressively low latency at 28.74 seconds while streaming live TV at a home in the suburbs. Considering latency usually falls somewhere between 25–50 seconds, it’s safe to say that Verizon scored very high for this round of tests.

Anecdotally speaking, I was able to watch the game with no buffering pauses or grainy streaming quality. For reference, we performed the exact same test with T-Mobile, and it scored a 33.33 second latency—about five seconds behind Verizon. Hold on to your hats ladies and gentlemen, Verizon just got the edge T-Mobile. Take that for data!

Speed test from the supermarket

Not to throw too much shade at T-Mobile, but, for the record, T-Mobile couldn’t stream at all in this very same aisle (cleaning products) of this particular store. With that context, Verizon actually killed the supermarket streaming test with a 30.57 second latency. As you can tell from the GIF above, the streaming quality was sharp along with the relatively low latency.

Wait, who streams at a grocery store?

It’s one of those things you never plan to do necessarily, but when the moment calls for it, you want to be prepared. As a sports fan, I’ve watched my fair-share of buzzer beaters standing in an aisle of the grocery store, silently, and awkwardly, celebrating.

Speed test from a hike in the wilderness

Fatigue was really setting in, and if you could hear sound in this GIF, you’d hear my one-year-old voicing his displeasure with the situation.

At this point, Verizon streaming has been impressively consistent in every situation I’ve thrown at it. A 32.70 second latency is pretty much as good as you’ll see in the wilderness during the 4G era. In fact, I was able to stream NBA: The Jump as I hiked and listened to it like it was a podcast. There was only a short buffering period when I first opened up the YouTube TV app, and then it was smooth sailing.

As far as hands-on testing goes, Verizon performed consistently better than AT&T and T-Mobile for streaming quality. Look at how the streaming latency compares across the three major networks.

Verizon wins in every category, and especially blows T-Mobile and AT&T out of the water when it comes to streaming in crowded places like a grocery store. For our money, Verizon is your best bet for wireless streaming wherever you go. Looks like Verizon’s streaming quality does indeed match its best-in-class coverage.

Verizon has proved out its dominance for impressive streaming quality to go along with its awesome coverage—we just wish the plans were a few dollars cheaper. That being said, if quality and consistently matters to you with your wireless network, you won’t find a better option than Verizon. Here are what Verizon cell phone plans look like currently.

If you are a Verizon user, let us know about your experience streaming on a wireless connection. Do you find that your live stream isn’t all that “live” because it lags behind by dozens of seconds? Does the streaming quality get super bad? Please let us know in the comments below!