How to Use a T-Mobile Hotspot

Get the most out of your T-Mobile phone plan with hotspot technology.

If you’re not using your T-Mobile phone as a hotspot, you might not be getting the most out of your device and your phone plan. Hotspots can help you get work done, stream your favorite shows, and stay connected even when you don’t have a wired internet connection.

So, how do you set up a T-Mobile hotspot?

We’ll walk you through setting up a T-Mobile hotspot, step by step. But first, let’s make sure you have everything you need.

How hotspots work and what you need to make one

A hotspot is basically a Wi-Fi router like the one you have at home. But instead of using a wired broadband connection for internet service, a hotspot uses your phone’s network. Once you’ve set up your hotspot, other devices can tether to it like they would a Wi-Fi network.

A T-Mobile hotspot may not be as fast as your home internet connection, but its speeds are respectable. If you’ve got 4G LTE service, then your speeds will be around 25 Mbps (you can learn more about how much internet speed you actually need in our handy guide).1

Is your T-Mobile plan hotspot capable?

So, does T-mobile offer free hotspot data to its customers? The answer is: sometimes.

Many of T-Mobile’s plans are hotspot capable. But some of these hotspot capable plans have pretty restrictive limits, such as capping data at 3G speeds (which is about as fast as your old dial-up internet).

Here’s a look at how much hotspot data you’ll get with each of T-Mobile’s unlimited data plans:

T-Mobile’s limited-data plans will allow you to use your purchased full-speed data as hotspot data, but after that you’ll be limited to 3G speeds.

If you’re not satisfied with T-Mobile’s options for hotspot data, check out these other plans.

Is your T-Mobile phone hotspot capable?

Most cell phones on the market today are equipped with hotspot technology. But, if your phone is unable to connect to a hotspot it could be a hardware issue, chances are you might need to upgrade.

Here’s a list of the most popular phones from leading brands that are offered through T-Mobile.

Setting up a T-Mobile hotspot on Apple devices

Setting up a hotspot on your Apple device is an easy process. First, follow these steps to enable your hotspot.

After you’ve enabled the hotspot on your phone, it will give you a password to use for tethering other devices. Here’s a screenshot from my iPhone to show you what it will look like. 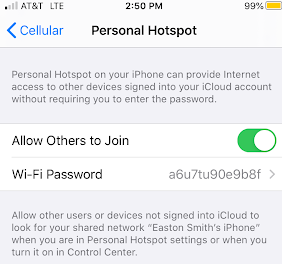 Your other devices will now be able to see your phone’s Wi-Fi network (usually it will be “[your name]’s iPhone”). Just enter the password, and you’ll be connected.

Once you’re connected a blue bar will appear at the top of your iPhone screen telling you that the hotspot is enabled. And that’s it, you’ve done it!

Setting up a T-Mobile hotspot on Android devices

Now, here are the steps for setting up a T-Mobile hotspot on an Android phone:*

*There are many different types of Android phones, and sometimes phone manufacturers will create custom settings for their devices. Still, the process for setting up a mobile hotspot should be similar to the one described here.

You can also change the security settings and password for your mobile hotspot on this settings page.

Once your mobile hotspot has been enabled, you need to be sure to turn it on. You can do this either in settings or using the Quick Settings and clicking the Wi-Fi hotspot icon. 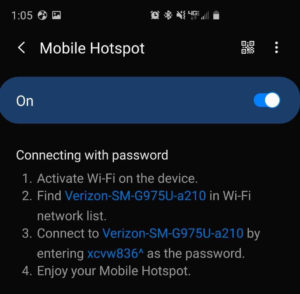 Now you should be able to tether other devices to your phone’s hotspot network! Easy peasy.

How to set up other hotspot devices

It’s not just cell phones that can be used as T-Mobile hotspots. Here’s a look at some of the other devices that can act as hotspots, including your car.

You can buy a dedicated T-Mobile hotspot, like the HotSpot Z915, which can support up to 10 other tethered devices. Devices like this run on T-Mobile’s internet-only plans, rather than a normal phone plan. A dedicated hotspot can be an essential part of a mobile office.

Each dedicated hotspot device will have its own set-up instructions, but they shouldn’t be difficult to follow.

Setting up in-car Wi-Fi with T-Mobile

You can turn your sweet ride into a sweet ride with internet using a device like T-Mobile’s SyncUP DRIVE. That way you can keep all of the kids distracted on those long road trips. Nice.

Not all cars are equipped with the required technology to become internet hotspots, so be sure to check your vehicle’s manual before making any purchases.