Get SimpliSafe. Or get Scout. They’re both low-cost DIY systems, although we like SimpliSafe slightly more
Best RFID Option

Wide equipment selection
App costs extra
View Plans
https://www.reviews.org/home-security/scout-vs-simplisafe-review/
Which is better, Scout or SimpliSafe? We walk through features, pricing, automation, installation, and customer service to help you pick between the two.
May 5, 2021

Scout vs. SimpliSafe is a tough comparison. Both are DIY, no-contract systems that require you to pay for mobile access. They’re also really different in some ways. SimpliSafe is a better-known service with lots of equipment, while Scout is cheaper and has more home automation.

Let’s talk more about which you should choose.

Scout and SimpliSafe packages start at around the same price, but their monitoring plans have a $5 difference.

SimpliSafe equipment prices
SimpliSafe continuously adjusts its package prices. Its lowest-priced package, the Foundation, usually comes in at about $229. That’s comparable to the Scout Small Pack, which is the same price but offers a little bit more equipment.
Scout vs. SimpliSafe price comparison

As the table states, neither system requires a contract. You can begin and end service at any time.

Scout’s self-monitoring option isn’t free, but it lets you take home safety into your own hands. For $9.99 a month, you get access to the Scout app to keep eyes on your system.

If you go up a tier, Scout’s Always On+ monitoring gives you 24/7 professional monitoring and cloud storage for one camera. Always On+ users still have access to the app, so you can check in yourself if you want to.

You can sort of self-monitor with SimpliSafe for free, but not really. Without paying, all you can do with the app is glance at the camera feed and lock or unlock a smart lock.

To get anything beyond that, you have to pay for professional monitoring at a minimum of $14.99. But at that price, you can’t use the SimpliSafe app or connect to a smart speaker. You’re gonna have to pay $24.99 if you want any of that.

Also, if you want cameras, you have to pay extra. It’s $4.99 per camera per month to record and/or download video clips. That adds up fast!

Scout app vs. SimpliSafe app
We don’t love that either of these companies charges for app access, but we prefer Scout’s approach over SimpliSafe’s. At least you’re only paying $9.99 to use the Scout mobile app, not $24.99. But the SimpliSafe app has better ratings.

SimpliSafe is the winner in the equipment category.

Scout has some competitive stuff, but SimpliSafe has more proprietary devices and package options than Scout. A SimpliSafe package currently comes with a free camera, and you can even pay a small fee for professional installation. 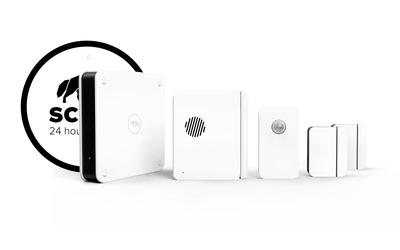 One of Scout’s main features is the keypadless standard system. It’s nice (and in many cases, safer) not to be tied down to a piece of stationary hardware, but some users will find it equally frustrating to be dependent on a phone/key fob/RFID sticker.

Luckily, if you don’t like the four keypad-less package options, you can also build a custom system.

Just know that Scout doesn’t have all the bells and whistles in its equipment selection. Don’t get us wrong; Scout has a few more options than it did previously. For instance, you can get a Yale door lock as part of a Scout package, which is great . . . but you still can’t get a garage door opener or a smoke alarm. You’ll have to bring in some third-party equipment for a full smart home experience (more on that later).

FYI: Scout relies mainly on RFID for device communication and also uses cellular backup. If your home loses its Wi-Fi connection, you should still be good to go. 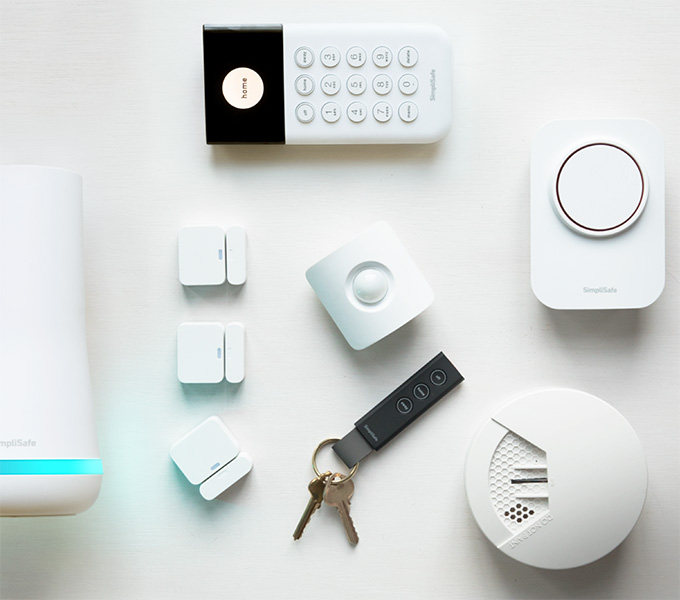 SimpliSafe has 16 different packages, though not all of them feature prominently on the website. That gives you plenty of options to choose from. You can even create a customized system using SimpliSafe’s vast array of equipment. (SimpliSafe makes a motion sensor, entry sensor, smart lock, key fob, carbon monoxide alarm, smoke detector, panic button, and more. It’s definitely better-equipped than Scout, although it doesn’t have every smart home feature.)

A SimpliSafe system comes with the following features:

At checkout, you may receive an offer for a free SimpliCam (SimpliSafe’s indoor security camera). The camera normally retails for $99, so it’s a pretty sweet deal.

Scout has a lot more home automation than SimpliSafe.

Scout has some of the best compatibility we’ve seen in a home security system. It integrates with four of the most important protocols/brands: Amazon, Google, IFTTT, Z-Wave, and Zigbee.

This high compatibility level means that you can connect your Scout system to a lot of third-party smart devices. You can add this system to a smart home full of locks, lights, thermostats, and environmental sensors, to name a few.

SimpliSafe’s compatibility is a lot less impressive than Scout’s. You can connect with a Google Home or Amazon Echo. That’s super useful, and you can build a nice smart home by connecting a lot of different brands through your smart speaker.

But it’s not quite the same as connecting your security system directly to your other devices. You have to take that extra step of running everything through Google Assistant or Alexa first.

Of course, because SimpliSafe has more proprietary equipment than Scout, there’s less need to connect to third-party products.

Both systems are DIY, but SimpliSafe also offers professional installation.

No matter which alarm system you use, you’re responsible for setting it up—unless you’re willing to pay SimpliSafe a little extra to send an installer.

Scout is completely DIY. Each piece has adhesive backing, so it should be relatively easy, even if you’ve never installed a home security system before.

By contrast, you can install a SimpliSafe DIY system yourself, but if you’re not up to it, you can also contract a professional through the SimpliSafe website. Just select the option at checkout.

Neither Scout nor SimpliSafe has our favorite customer service.

There are more recent reviews of SimpliSafe than of Scout, making it easier to judge SimpliSafe’s strengths and weaknesses.

Scout’s been around for seven+ years, but there are hardly any reviews of its customer service. It doesn’t even have any BBB complaints. So it’s hard to judge what you’re gonna get with Scout.

There are plenty of SimpliSafe reviews. The chief complaint that we see is that it’s hard to get ahold of SimpliSafe reps. It also apparently takes a while to process returns or refunds.

Recap: Which system is better?

We’d recommend SimpliSafe first, but we still like Scout.

We really like SimpliSafe because of its equipment selection and flexibility. But if you aren’t a fan, Scout is an excellent alternative. Its low prices and high level of home automation make it a solid choice.

If you still can’t choose, check out our individual Scout Alarm and SimpliSafe reviews.