The Blue by ADT doorbell is promising, especially considering the reasonable price. 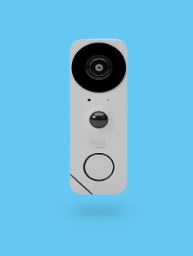 Rechargeable batteries
Inexpensive subscription plan
Erratic facial recognition
View Plans
https://www.reviews.org/home-security/blue-by-adt-doorbell-review/
Curious about the cameras in the Blue by ADT security offering? Check out this Blue by ADT doorbell camera review to see what features you can get with this porch camera.
August 3, 2020

In our Blue by ADT review, we mentioned that you could buy the Blue by ADT doorbell camera as a standalone piece. If that piqued your interest, we’re here to give you a rundown.

Let’s talk shop about the Blue by ADT doorbell camera (also sometimes known as the Blue Doorbell Camera). It’s reasonably priced and has a lot of useful features, but the facial recognition needs some work.

The Blue Doorbell Camera looks good and comes with tons of features. 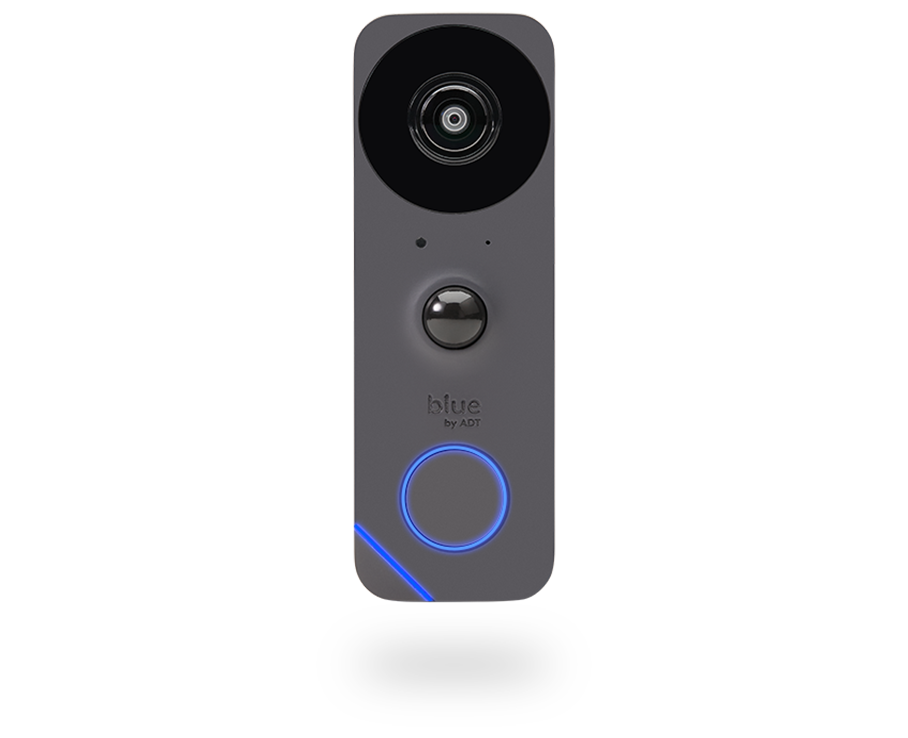 First off, this is one of the prettiest doorbell cameras we’ve seen. It’s not as flashy as Ring or Skybell, but we think the more modest, matte look is preferable for many homes. It definitely doesn’t scream, “Steal me!” like some video doorbells do.

Doorbell colors
You can get this little beauty in either graphite or pearl gray. No, it doesn’t come in blue.

Within the hardware, there are several useful video doorbell features.

Facial recognition is the most uncommon feature included with this video doorbell. Ring, which is arguably the top brand for video doorbells, doesn’t even have this plus.

Users say the facial recognition can be erratic, which is a bummer. But we’ve tested facial recognition with Nest (arguably the second-best brand for video doorbells), and we have to say that’s erratic too. During a test conducted by one of our reviewers, the Nest Outdoor Cam IQ struggled to recognize the same person from different angles.

So basically, facial recognition, in general, is still a work in progress. We don’t think you’re gonna get drastically lower recognition quality with Blue by ADT. Plus, we like that the company isn’t charging an arm and a leg for this experimental tech.

This camera is equipped with a motion detector. You can even customize the motion zones to change the focus.

This video doorbell has a lot for the price.

With facial recognition, night vision, two-way talk, and cloud storage, this camera is a terrific deal. It’s hard to find all that at the $200 price point.

The $2.99-per-month, cloud-storage subscription is an excellent deal as well. Most companies are charging $5, $10, and even more per month for cloud storage.

This doorbell works with Alexa and IFTTT.

Some pieces of Blue by ADT equipment work with Google Assistant and Z-Wave Plus. However, the doorbell camera is compatible only with Amazon Alexa and IFTTT.

That’s not the best smart home automation we’ve seen. Still, the flexible nature of IFTTT means that you might be able to set up chain reactions using a Google Home or Z-Wave product.

You’re responsible for installing your Blue by ADT doorbell camera.

Because it’s designed primarily to be part of ADT’s DIY security suite, the doorbell camera is self-install only. Luckily, ADT provides a helpful YouTube video.

Your camera comes with brackets, screws, wires, and connectors so you can install it on your own. You’ll also need to open your Blue by ADT app to complete installation.

If the thought of setting up the camera overwhelms you, you can always hire a professional or bribe a friend to do it.

Recap: Is the Blue by ADT doorbell camera good?

By all accounts, this camera is a good one.

We recommend the Blue by ADT doorbell camera to you, especially if you have a Blue by ADT system. It’s not too expensive, and it includes a lot for the price.

You might still have some questions about the video doorbell. Let’s talk.

Does the Blue by ADT video doorbell have professional monitoring?

No sir. The $2.99 fee covers your rolling 60-day cloud storage, but it doesn’t put any eyes on your cameras (besides yours).

It’s unusual for a company to offer professional video monitoring.

It’s unusual for a company to offer professional video monitoring, TBH. Probably because security cameras easily pick up on things users don’t want to share outside their homes.

Can I use a Blue by ADT camera with my existing ADT security system?

ADT has two offerings. There’s the DIY system (Blue by ADT), and there’s the traditional ADT system, which you can get using plans from a variety of third-party dealers. If you already have one of these numerous plans, like ADT Pulse or ADT Command, it seems natural that you could add an ADT by Blue camera to your security system, right?

Well, ADT by Blue systems are rebranded LifeShield equipment, while typical ADT equipment is from Alarm.com. Because of this, they’re unlikely to be compatible with each other.

Why are there batteries if the camera is hardwired?

The Blue Doorbell Camera is a wired doorbell, but the batteries are present as a backup, just in case.

Is your house ready for the Blue by ADT doorbell camera?

At Reviews.org, we like to focus on the connected home. That means we want to set you up for success with your new camera by talking about your best internet options (for connectivity) and phone plans (for app/video feed access).

Cameras tend to eat up a lot of bandwidth on the Wi-Fi. Here are some plans that can give you the Mbps you’ll need.

Recommended internet plans for Blue by ADT Doorbell Camera
Data effective 11/19/18. Offers and availability vary by location and are subject to change.
* For the first 12 months. Some packages require a 1- or 2-year contract.
† w/Auto Pay + taxes. Equipment charges may apply.
‡ For the first 12 months with a 1-year agreement.

You’ll especially want to access your system remotely if you choose to self-monitor. But to do that, you need good provider coverage and sufficient data.