The latest season of House of Cards is finally out! Here at Reviews.org we wanted to play with history a little and put Frank Underwood up against another fictional president (Scandal's Fitzgerald Grant) in an election-style, head-to-head race to celebrate. We figured, with everything going on politically, it’d be fun to escape to the somehow-more-uplifting world of President Frank Underwood. 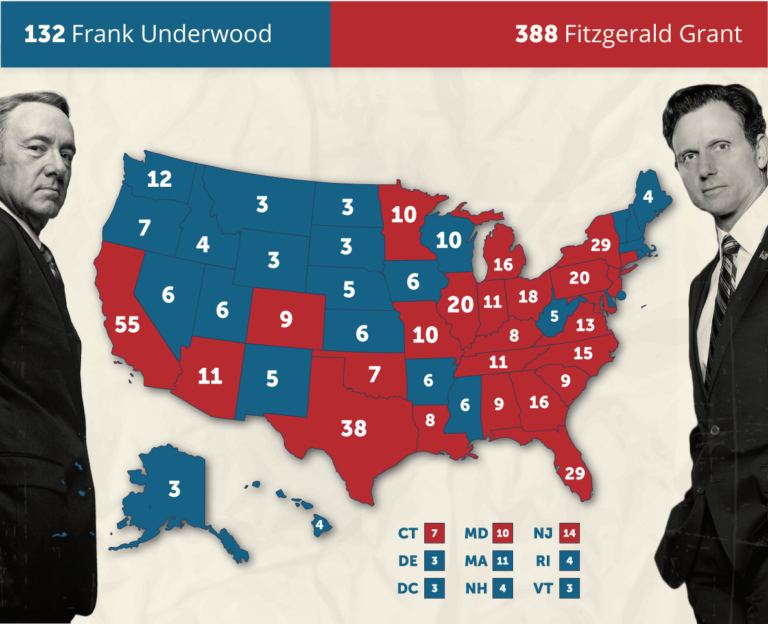 Scandal is unfortunately ending in 2018, with the end of Republican Fitzgerald Grant’s presidency, so you’ll have to suspend disbelief somewhat for our study. We looked at Google Trends data from the last five years (when both shows had begun) and then compared the findings to make a mock electoral map.

Here are a few observations:

About House of Cards and Scandal

It’s undeniable that House of Cards is one of the most popular political dramas of our time with some of the most iconic characters. For those not in the know, Academy Award winner Kevin Spacey plays Frank Underwood, a tactical and dark South Carolina Democratic Speaker of the House turned president. This show’s full of well-shot, poignant scenes, sex, and murder.

As a big-time West Wing fan myself, I found the blend of politics and drama fascinating on these newer shows. It's interesting to note that, while much of the suspense on the West Wing in the early 2000s came from laws, big personalities on Capitol Hill, the constitution, and filibusters, the explosion of political television in recent years has veered more towards sex, murder, terrorist moms, and more murder.