The Most and Least Streaming-Obsessed States

According to our research, Americans spend $57.3 billion on streaming services each year.1,2,3 We’ll break down how this multi-billion dollar industry is spread across the country.

Combining our recent survey of over 300,000 Americans with TV statistics from Leichtman Research—as well as population data from the US Census Bureau—we ranked each state’s streaming obsession.

We scored each state based on its percentage of cord-cutters, and how much time and money it spends on streaming. While there are some differences, it seems each state’s (more than) a little obsessed with streaming.

The most and least streaming-obsessed states 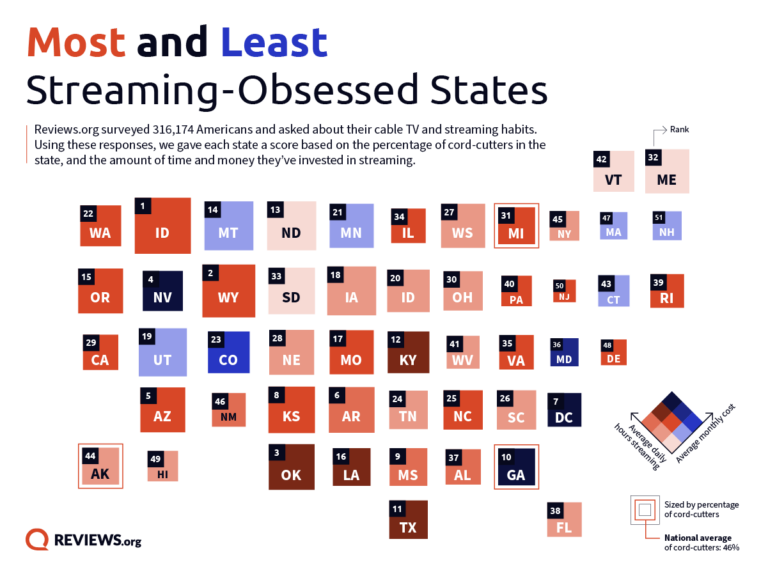 Don’t worry,you’re not the only one racking up streaming subscriptions and staying up too late to watch “just one more episode.”

Before we dive into the state-by-state stats, let’s look at a little national context:

So which companies are getting the lion’s share of streaming service subscriptions? 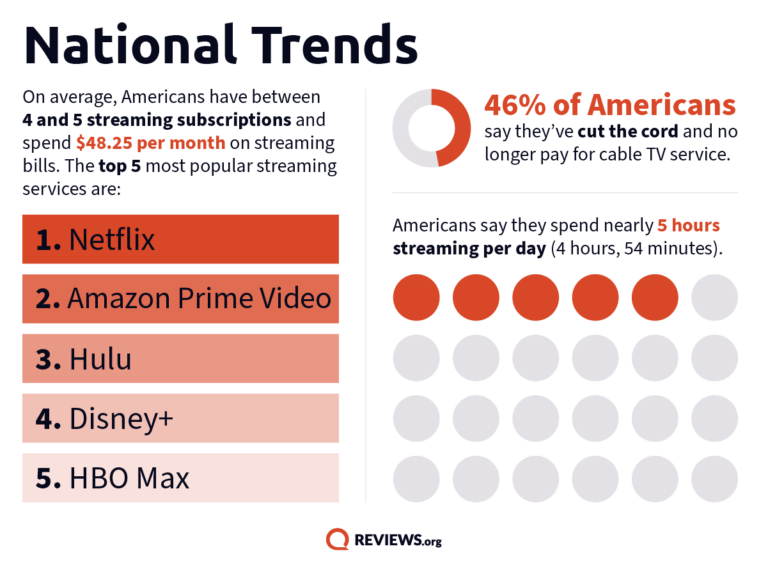 The top 5 most popular streaming services in the US:

According to our survey, Netflix reigns supreme as the premier streaming service. But Amazon Prime Video and Hulu are America’s top picks for a secondary service.

Disney+ earns its place in fourth as a fan favorite. And despite being a relative newcomer to the streaming scene, HBO Max caps off the top five streaming services Americans use.

States with the most and least cord-cutters

Making the switch to streaming over cable can save you a lot of money. However, even the states with the most cord-cutters still have about a third of their population subscribing to cable TV. 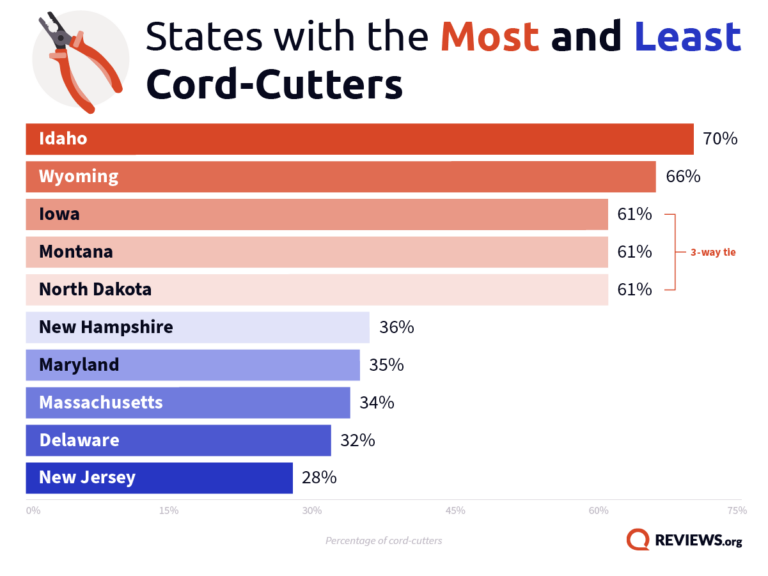 Cord-cutting is most popular in states with more rural areas, and where it may be easier and cheaper to connect to streaming than to access and pay for cable TV. Idaho tops the list with nearly 70% of the population cutting the cord, and Wyoming follows with 66% of the population going cable-free. Iowa, Montana, and North Dakota tied for third at 61%.

States like New Jersey, Delaware, Massachusetts, Maryland, and New Hampshire have only about a third of people who decided to cut the cord. Folks in Massachusetts also spend less time streaming than most of America.

States that spend the most and least time streaming per day 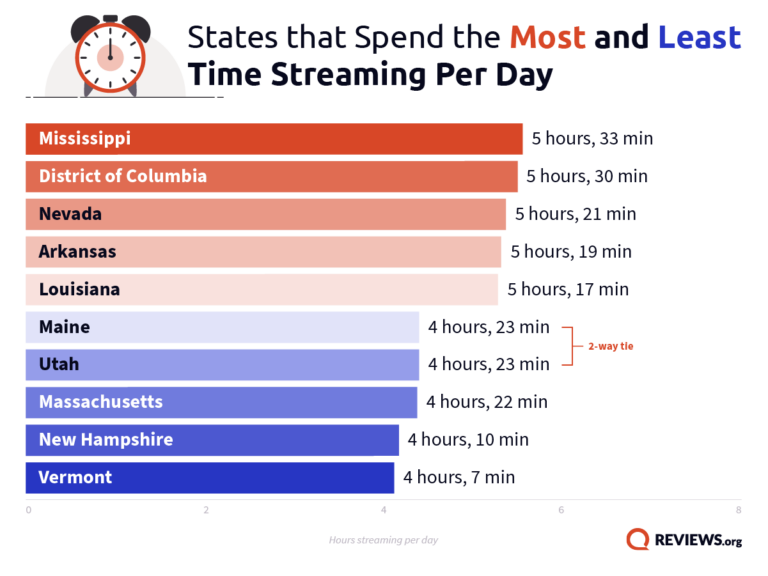 In the United States, Mississippi spends the most time streaming shows and movies—coming in at five hours and 33 minutes per day. The District of Columbia, Nevada, Arkansas, and Louisiana are not far behind, clocking in over five hours of streaming a day.

States that watch TV less, like Vermont and New Hampshire, still spend over four hours every day streaming. That means even people in the least streaming-obsessed states clock in anywhere from four to eight episodes of TV, maybe one or two movies, or the entire Snyder Cut of Justice League. Every. Day.

It seems we’re all obsessed with our favorite streaming services—and willing to pay for them.

States that spend the most and least money on streaming 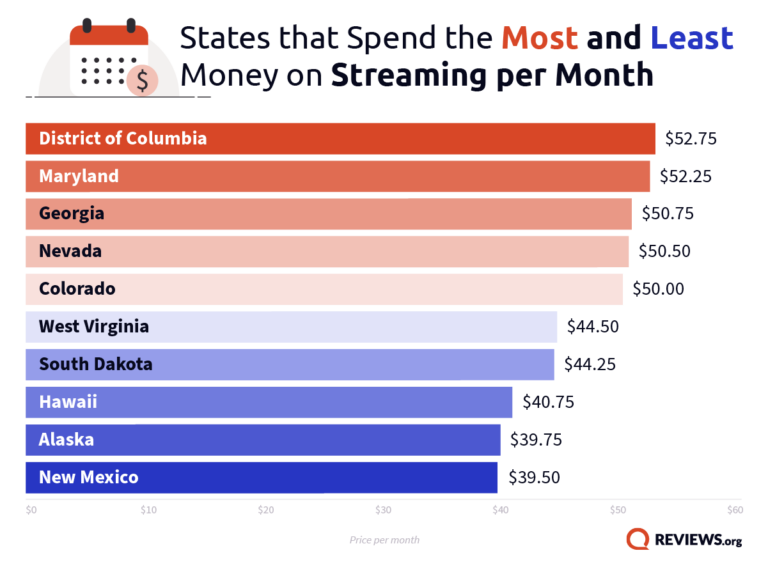 DC, Maryland, Georgia, Nevada, and Colorado spend over $50 every month on streaming services—while that’s not exactly cheap, it’s more affordable than a cable bill. Meanwhile, New Mexico and Alaska spend less than $40 on streaming every month. That’s like paying for an extra tank of gas every month, but for more TV.

Switching to streaming services instead of cable can save you about $60 every month. But if you supplement your traditional TV with streaming services, you’re paying over three times more than the cord-cutters.

It’s not hard to imagine a world where streaming can overtake cable. The average American has between four or five streaming subscriptions. Plus, as part of a larger pattern in rising costs, Netflix, Disney+, and Hulu have all increased subscription prices in the past year.6,7,8

Over time, more services will compete and offer even more options. We expect the monthly cost of streaming services to continue to rise, and more people to sign up.

Is there an end to our streaming obsession?

America’s streaming obsession is only going to continue, according to Google Trends:12

Has our time spent watching TV maxed out? We have to work and sleep at some point, right?

We’ll have to get back to you on that one. In the meantime, enjoy your streaming!

We used the following information to estimate the total amount Americans spend on streaming services annually:

Reviews.org surveyed 316,174 Americans and asked about their cable TV and streaming habits. Utilizing these responses, we gave each state a score based on the percentage of cord-cutters in the state and the amount of time and money residents have invested in streaming.

To rank each state, we used a weighted measurement:

Each metric was normalized on a 0-1 scale with 1 corresponding to the measurement that would most positively affect the final score. These adjusted measurements were then added together with the weights mentioned above to get a score of 100.

Reviews.org used Google Trends to evaluate volume for searches containing the term “without cable” between January 2004 and September 29, 2021, indicating viewers searching for ways to watch their favorite content without a cable TV subscription.

This content was produced by Reviews.org and is in no way sponsored, endorsed, or administered by, or associated with, Netflix, Amazon Prime Video, Hulu, Disney+, or HBO Max.