We polled Americans to figure out which fictional president would win an election. 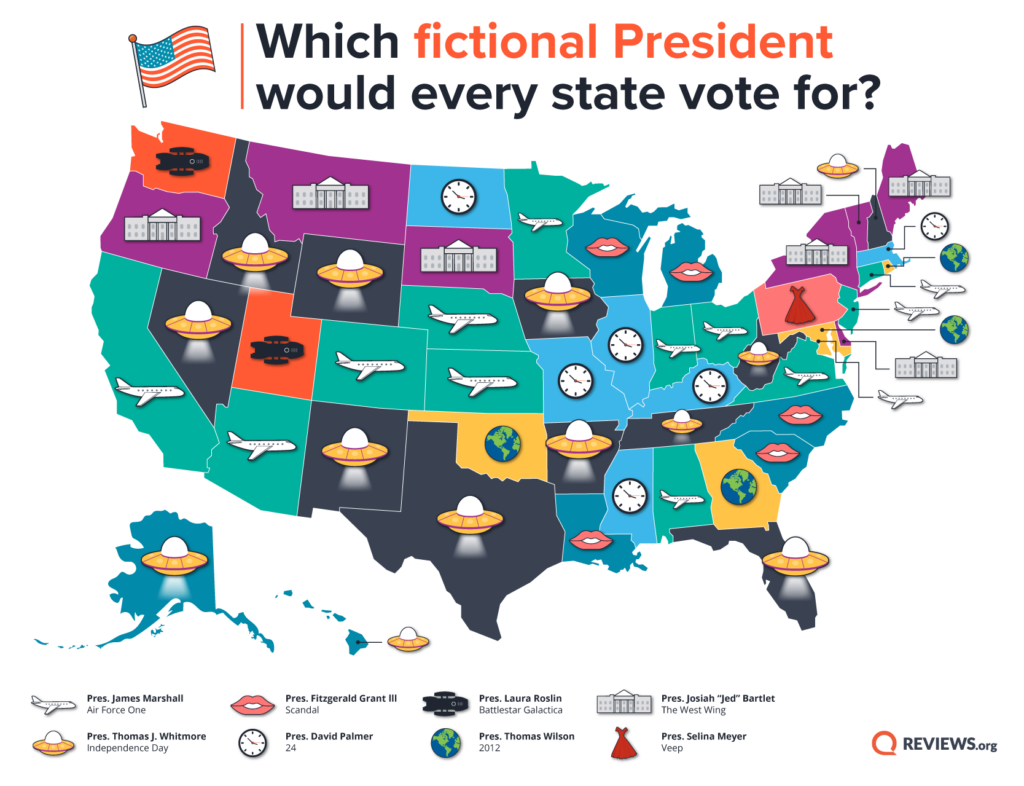 What do you look for in a president? Sure, the ability to give dramatic speeches and enact policies that elevate American lives is great and all, but can it compete with the ability to fly planes, knock out terrorists, or fight off aliens?

We asked Americans which presidents from TV shows and movies they’d vote for in the upcoming election. Turns out, Americans like action-oriented pilots who can deliver a darn good speech and show compassion for human life.

“Peace isn't merely the absence of conflict, but the presence of justice.”

Given their choice of fictional presidents, Americans would elect President James Marshall from the 1997 film Air Force One. The fictional favorite picked up 124 electoral votes from 13 states.

Harrison Ford is known for his action-oriented roles, and playing the commander-in-chief was no exception. President James Marshall looks danger straight in the face and says, “Get off my plane!” after saving America and his family from murderous terrorists.

Throughout the film, James Marshall puts his life on the line while showing compassion, gratitude, and love for others. He evades the enemies with smart tactics and hand-to-hand combat, makes difficult life-and-death decisions, and even escapes incoming fighter jets while flying Air Force One.

It wasn’t his first time in the air protecting people either. Before becoming president, James Marshall received a Medal of Honor for his heroics as a helicopter rescue pilot during the Vietnam War. (Harrison Ford’s real-life piloting skills may be questionable. He’s had some aviation issues over the years.)

Between his inspiring words and actions and his desire to do the right thing despite politics, President James Marshall has the qualities that make for a great leader. Good pick, America.

"We will not go quietly into the night! We will not vanish without a fight! We're going to live on. We’re going to survive. Today we celebrate our Independence Day!'"

Although he didn't win the electoral count to become the president in our fictional election, President Thomas J. Whitmore from the sci-fi blockbuster Independence Day won the same number of state votes as James Marshall. The former fighter pilot played by Bill Pullman stands out for his ability to unite the world and take direct action against all odds.

After aliens invade, the president hangs back instead of evacuating, staying to lead the American people. Before he leads the dogfight in the air against the aliens with the threat of annihilation looming, he busts out one of the most memorable presidential speeches in movie history. (Even real-life President Trump paid a strange homage on Twitter to the fictional president’s speech, apparently to Pullman’s dismay.)

As Americans well know, the Electoral College vote determines the presidential election winner. But still, looking at the state breakdowns makes it a little more fun to see who America loves.

James Marshall won the states where it counts the most, which gained him nearly fifty more electoral votes and the win. But at the state level, James Marshall and Thomas J Whitmore tied.

In another electoral upset, more states would pick Josiah “Jed” Bartlet from The West Wing, but the Electoral College ranks David Palmer (24) and Fitzgerald Grant III (Scandal) ahead of Jed.

“In war, you can only get killed once. In politics it can happen over and over.” — President Linda Roslin, Battlestar Galactica

Despite picking up wins in Utah, Washington, and Pennsylvania, the two female candidates fell to the bottom of our rankings. Battlestar Galactica’s Laura Roslin and Veep’s Selina Meyer won 38 electoral votes combined.

The big winners came from big movies (Air Force One and Independence Day), making it more likely that someone can see the president’s leadership in a single sitting and recognize them. But other series like 24, Scandal, and The West Wing also received higher rankings; they all featured male presidents.

Hopefully, we’ll see better political representation for everyone on- and off-screen in the coming years. 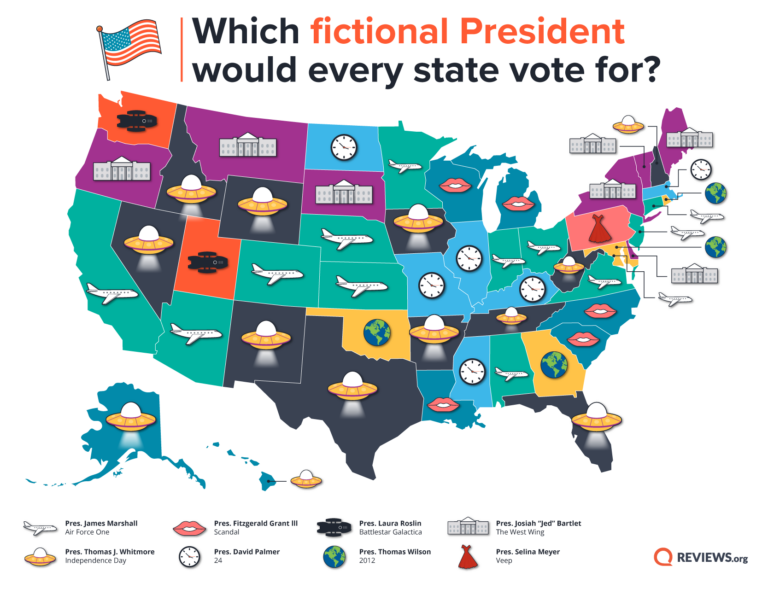 Did your state pick your favorite fictional president? Feel free to share this link to start a friendly debate on your Facebook feed.

We took a list of fictional presidents from Wikipedia and narrowed them down to candidates who played essential roles in their respective films or TV shows.

(In other words, we crafted a shortlist of fake presidents who made a positive difference in their fictional worlds, but some of your personal favorites might be missing.)

With our shortlist, we surveyed Americans 18 and over to determine which fictional president they would most likely vote for. The survey had a sample error of ± 4.5 percent and a 95% level of confidence.

In states where there were not enough respondents to make a fair determination, or in the event of a tie, we still picked a winner. We weighed the top candidates in the state’s respective US census region against high search intent for the film or television show the fictional president appears in using Google Trends.

This survey was conducted by Reviews.org and is in no way sponsored, endorsed, administered by, or associated with any of the properties listed above or their affiliates. 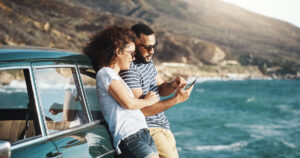 By
Tyler Abbott
Can You Be a Digital Nomad in a Sedan?
When you imagine a digital nomad, you probably think of them driving a tricked-out van... 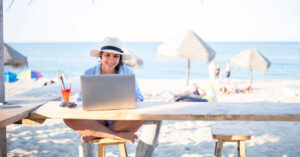 By
Tyler Abbott
Essentials for Workcations
What once was an oxymoron (work + vacation), has now become a real thing. Workcations...