We’re just taking a look at online guilty pleasures by country—and no, this list isn’t about adult content. 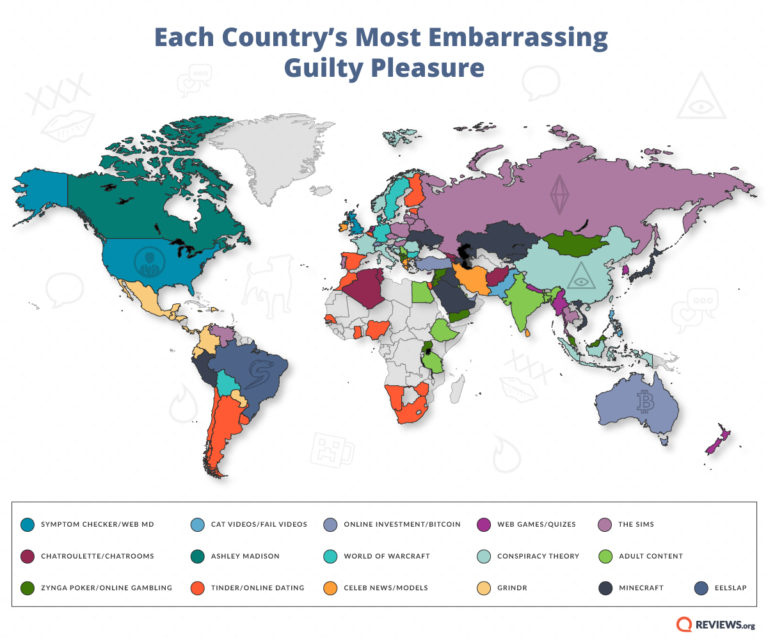 Wait, wait—don’t freak out and delete your browser history yet. We’re just taking a look at online guilty pleasures by country—and no, this list isn’t about adult content. (Spoiler: Pakistan is the only country in love with adorable cat videos as much as we are.)

First things first: We didn’t pull a Facebook to discover all these secret searches. Instead, we put together a list of topics you might type into Google when no one’s looking. Then we cross-referenced that list with Google Trends data to find out which saucy topics people in each country are most likely to search for.

So strap in your seatbelts and hang on tight. It’s time to dive into the World Wide Web of guilty pleasures.

Sorry francophiles, looks like Spanish really is the language of love.

Whatever way you spin it, there’s no denying Spanish-speaking countries love to swipe through Tinder and Grindr. If you live in Argentina, Chile, Colombia, Costa Rica, the Dominican Republic, Ecuador, Guatemala, Honduras, Mexico, Panama, Paraguay, Spain, or Uruguay, chances are you’re getting your date on online. Here’s to finding love in all the hot places.

2. Europe: Are you for the Horde or the Alliance?

There’s one thing residents of Bulgaria, Denmark, Germany, and Sweden have in common: they all join forces to battle the Burning Legion and defend Azeroth in the online game World of Warcraft (WoW).

With 41,378,754 gamers playing WoW on European servers (that’s about 1.5 million more than the number of people playing on US servers), it’s no surprise we see mostly European countries searching up a storm for all things World of Warcraft.

While we American gamers hate to admit it, Europe does seem to be number one when it comes to both PvE and PvP content. (That’s Player vs. Environment and Player vs. Player, for anyone who doesn’t understand gamerspeak.) The top three PvE WoW guilds—Method, Экзорсус, and Memento—all come from EU servers.

As for PvP, the 2017 BlizzCon arena champion team, “ABC,” also featured a European lineup with members from the UK, Norway, Finland, and France.

Who knows—maybe we’ll see a boom in jaw-dropping architecture as Minecrafters worldwide graduate from computer-generated worlds to real life.

Who knows—maybe we’ll see a boom in jaw-dropping architecture as Minecrafters worldwide graduate from computer-generated worlds to real life.

Will their buildings take futuristic forms, like the modern flame skyscrapers in Baku, Azerbaijan?

Will they aspire to restore cities to their former glory, like this idea to rebuild the five bridges that crossed the Tigris River into a housing complex in Mosul, Iraq?

Or will they give a nod to history, like the fascinating post-Soviet architecture of Kazakhstan?

Only time will tell, but in the meantime, we can all enjoy some gorgeous Minecraft architecture on YouTube.

We’re not sure what’s going on in the US and the UK, but both countries share a tendency to consult online symptom checkers like WebMD often.

Could it be that we don’t trust our doctors? Or maybe it’s because we just really dislike going to the doctor’s office? Either way, we hope residents in both countries are relying on qualified medical professionals to provide a final diagnosis.

5. We smell a conspiracy

We’re not sure if they’re just curious if Elvis is still alive or are very concerned that Hitler might have secretly escaped to South America. (Breathe easy—a scientific study debunked that last one.) Whatever the case, something out there is making residents of these countries concerned that things are not as they seem.

That’s a wrap for five of our favorite online guilty pleasures from around the world. Hopefully this left you feeling not-so-ashamed about your own internet habits. Lesson learned: you can delete your browser history, but search trends are forever.

Most popular searches by country 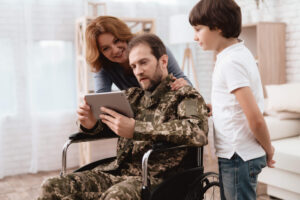