How much would your fan base sell out for?

The best time of the year is right now, and nobody in their right mind could disagree with that.

With the Super Bowl just around the corner, we decided to test how loyal fans are to their NFL team, discover the top favorite NFL teams, the team everyone hates, and how much they knew about Super Bowl LIV.

The most interesting data we found from NFL fans is how much they would need to get paid to “sell out” and support their rival team. Let’s just say that most teams' fan bases would basically need to be given a decent-sized house to support their rival. But there are a few who would sell out for less than a Tesla. Is it your fan club?

Which NFL team has the most fans?

If we asked you which team has the biggest fan base, who comes to mind?

For us, it was the New England Patriots (because you know how many bandwagoners they miraculously have after they win another Super Bowl). But we all know we celebrated way too hard when the Patriots were eliminated from the playoffs by the Tennessee Titans this year.

But, I digress. The Patriots actually came in second after the Dallas Cowboys. I mean, by week 3, you couldn’t stop hearing the Cowboys fans rave on about being 3-0⁠—after they beat the three worst teams in the league. (Insert Kermit the Frog drinking tea meme.)

Then the third biggest fan base is in Chicago cheering on da bears. It looks like the Jaguars, the Bengals, and the Chargers need to go on a little fan recruiting mission.

How much money would your fan base accept to support their rival?

Take a moment to consider how big of a fan you are of your NFL team. Yes, the team that has been part of your family’s culture for three generations. Or the team you decided to call “yours” because you liked the colors.

Alright, here’s the question. If someone were to make you a serious cash offer to permanently switch your team loyalty to your rival NFL team. . .how much would they need to pay you?

The Chargers have the most loyal fan base, while Tennessee Titans fans would switch teams for as little as a single ticket to the Super Bowl. 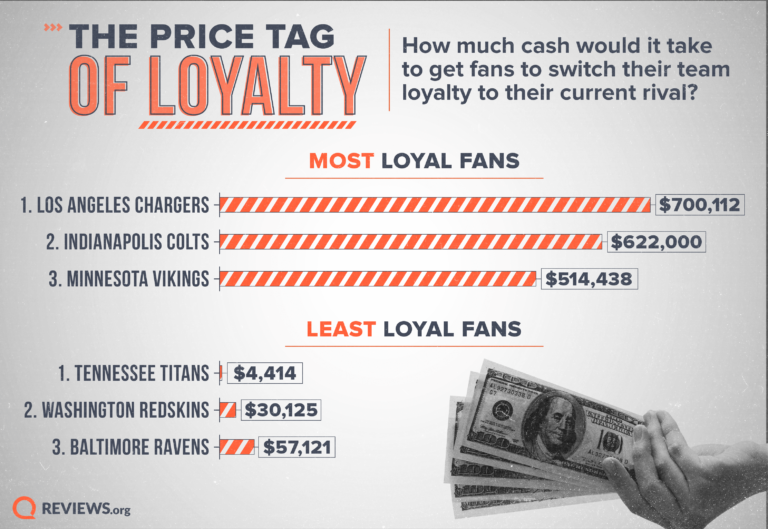 How much money would the Kansas City Chiefs and the San Francisco 49ers fan base accept to support their rival?

After 50 years, the Chiefs are finally making an appearance at the Super Bowl again. And after going 15-3 for the season, the 49ers successfully made their way to the big game.

But how much would these two teams’ fan bases sell out for?

The “Chiefs Kingdom” and “The Faithful” have pretty loyal fans and would need to be given close to $400,000. So in other words, they would need to get paid a two-year salary of an NFL referee upfront.

Which NFL team is the most hated?

The most popular team is the most hated team. The Boys are the most common rival nationwide, with the Patriots and Packers close behind. Why? It could be the number of wins, their history, or maybe the annoying fan base. Because we want to bet the Cowboys fan base would be in the top five—behind the Eagles fans, of course.

What’s your interest and knowledge about SB LIV?

More than one-third of Super Bowl watchers plan to take the following Monday off of work. There’s no shame in taking the day off to celebrate, recover from your hangover, or cope with your team’s loss. The Super Bowl is a huge holiday in America, for crying out loud.

We asked people how much they think one Super Bowl LIV ticket costs. The majority of Americans believe a single ticket costs somewhere between $1,000–$2.999. According to StubHub, the average price is a whopping $4,380.

And although most Americans assumed tickets were in the low thousands, most fans said they wouldn’t pay more than $500 for a Super Bowl ticket—even if their team played their rival!

Let’s be honest. Cable TV is still alive because of sports. We want to watch the big tackles and the one-handed catches on the big screen. Almost half of Americans will be watching the Super Bowl through their cable TV provider, and about one-eighth of Americans will be watching the game through their live TV streaming service.

Either way, more than half of Americans had no idea the SB was going to air on FOX. C’mon people. A good chunk of ya’ll were confident you’d be watching the Super Bowl on NBC, CBS, ABC, or ESPN.

Even 82% of Chiefs fans and 71% of Niners fans didn’t know which network was hosting the 2020 Super Bowl.

So. Make sure you turn your TV on to the right channel for the big game, fun commercials, and incredible halftime show.

How do your favorite NFL team and fan loyalty rank?

Want to see how your favorite NFL team ranks and how much your fellow fans would sell out for? Check out the table below:

We surveyed Americans 18 and older before the playoffs to discover their sports-watching preferences, how interested they are in the NFL, who their favorite teams and rival teams were, how much they knew about the big game coming up, and how much they would need to be paid to “sell out” and support their rival team. We analyzed this data and found out what fans of each NFL team had to say about their interest and fan loyalty and ranked the teams based on popularity and sellout prices.

This survey was conducted by Reviews.org. This survey is in no way sponsored, endorsed, administered by or associated with NFL Enterprises LLC, its affiliates, or any of its teams. All team names are trademarks of the teams indicated.

Need something to satisfy your NFL fix? Read our NFL Sunday Ticket Review.

Need a streaming service to follow your favorite team? Check out our favorites.