https://www.reviews.org/trends/marvel-vs-dc/
We wanted to explore the quality of these blockbuster films — specifically, we were curious to see how critic ratings impacted performance.
June 20, 2017 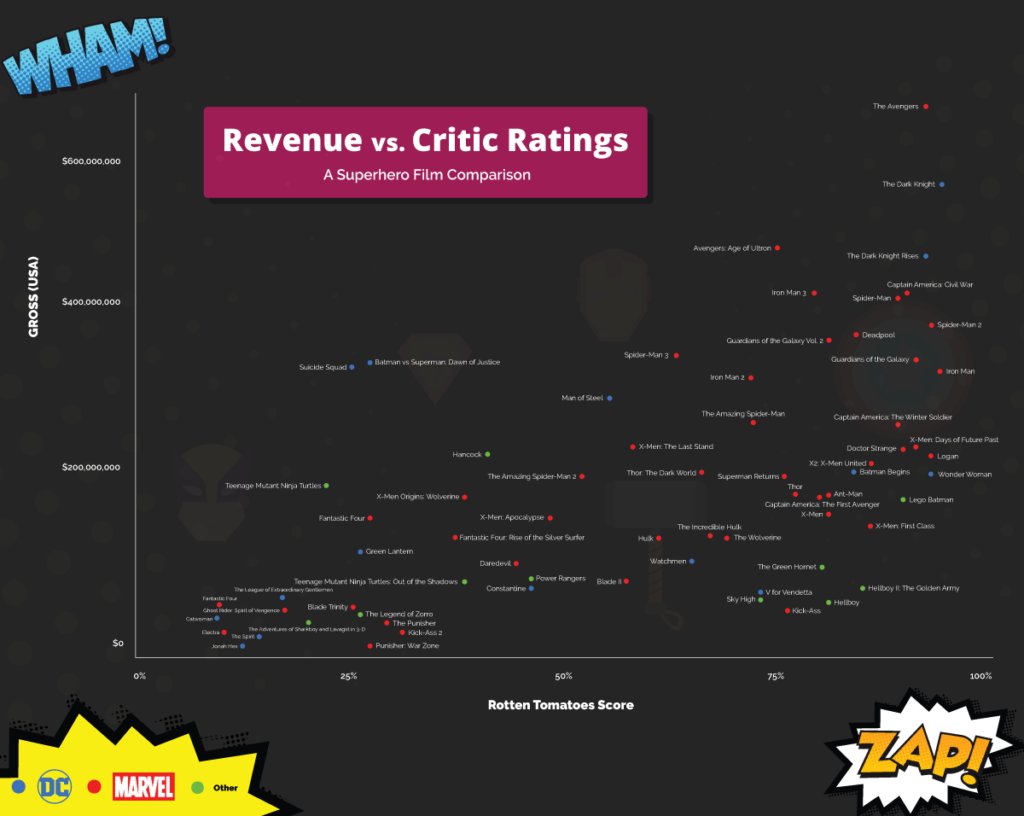 It feels like Superhero movies have taken over, right? Since 2000, there has been a steady flow of these films including reboots of classics, reboots of reboots, and edgy versions (can we give Dark Knight a hollah?).

Here at Reviews.org we wanted to explore the quality of these blockbuster films — specifically, we were curious to see how critic ratings impacted performance. So, we took all the Superhero movies from 2000, looked at the money they made at the US Box Office on IMDB, and added the score they earned from Rotten Tomatoes. Here are our findings—assembled!

The graph follows the order you would expect, with better rated films earning more money, but if we look a bit deeper there are some more interesting findings.

Films made in the past five years tend to do better with higher scores on Rotten Tomatoes, where the early 2000s saw a lot more flops. This could be because of our advancements in special effects in the last ten years or the need for edgier movies to hook modern audiences.

DC vs. Marvel? There is hardly a debate when looking at the scores. Yes, DC was the publisher for Christopher Nolan’s critically acclaimed Batman series, but other than that trilogy, most blue DC dots are chilling in the lower left hand corner of the graph: not well rated, not well watched. I guess DC may be the publisher we deserve, but not the one we need right now.

2016’s Suicide Squad (Oscar Winning, remember?) and Batman vs Superman have their own DC island, living it up in the low Rotten Tomatoes Score but high gross box office section. Does quality not matter anymore? Or do some people just like to watch the world burn? Wait—wrong Batman reboot.

While we’re talking about the Dark Knight, LEGO’s hilarious 2017 film scored highly with critics but didn’t break the $200 million mark in the United States. Why so serious, Batman fans?

…the ‘Man of Steel’ and ‘Superman Returns’ score well with critics and made bank at the box office.

Superman, of course, is one of the most iconic superheroes, and his original tale is often linked to the American Dream. There have been countless TV series, movies, and merchandise made of the caped crusader’s story, buff figure, and down-home cowlick. Despite this, films about the man of steel made this side of 2000 have struck more kryptonite than gold. Aside from the disastrous 2016 Batman vs Superman, the Man of Steel and Superman Returns score well with critics and made bank at the box office, but it feels less culturally significant than say The Dark Knight, Captain America, or Wonder Woman. Maybe Kal-el’s time in Smallville has something to do with it?

Speaking of Wonder Woman, she has a paradise island of her own in the charts. Of 70 movies (that’s taking into account Marvel and DC), only three featured women as the protagonist. Catwoman (2005, DC Comics, 9% RT score), Elektra (2005, Marvel Comics, 10% RT score), and the most recent and record-breaking Wonder Woman (2017, DC Comics, 94% RT Score). Were the terrible scores of the 2005 films enough to keep women from playing these roles until DC decided to up the ante? Apparently so. But praise Zeus, because Wonder Woman’s popularity proves people shockingly enjoy stories about women, too. Who would have thought?

Let’s start with the obvious—this summer we will see our third Peter Parker in seventeen years. Tobey Maguire’s early 2000s series sits up with high-grossing and highly rated films. This could be on merit, or because these films came at the start of the of superhero film surge. Andrew Garfield’s Amazing Spider-man did okay on the chart but not amazing as the name would suggest, so we see a decline in quality and interest for the franchise. This poses the question: why are we getting a third Spider-man?

The Reviews.org team would have its doubts about the film’s success—if it wasn’t finally being co-produced by Marvel Studios itself. Since 2008, Marvel’s been striking gold while assembling the Avengers movie-by-movie, so it only makes sense they take back their friendly neighborhood Spider-man in the upcoming Homecoming. But only time will tell how the web-slinger re-debuts on July 7th.

Speaking of the Avengers, it is the most successful movie in this genre. You’ll see the first film in the top right hand corner, earning well over $600,000,000 in the US Box Office, with the sequel scoring less with critics but second in earnings. Independently, those who make up the team have films that do well, too. Iron Man’s films pretty much live in the <70% Rotten Tomatoes score and earn way over $400,000,000 in the box office. Chris Evans was forgiven for the disastrous early 2000s Fantastic Four films he starred in, eventually becoming Captain America and similarly crushing the box office.

And now Marvel has announced that it’s finally giving a woman superhero her own movie; it’s frustrating that it’s being pushed back for Infinity Wars. Look at Wonder Woman, Marvel! She’s crushing it and empowering people everywhere. Give us Black Widow!

For many reasons, results show the X-Men film franchise to be one of the more consistent and popular. While the movies themselves have certainly had their ups and downs in quality (X-men Origins, go to the corner, you’re grounded), they do get a lot of things right—according to the data, anyway. Maybe it’s because the series breaks from the usual beat-up-the-bad-guy formula of this genre and actually includes women and people of color for more than plot points? Or maybe people just really like Hugh Jackman? Who knows. But it is indisputable that these films scored highly (give or take an Origins) and earn a decent amount. In fact, together these eight films have made $12,808,780,630 at the box office.