These States Are at High Risk for Black Friday Violence

https://www.reviews.org/trends/high-risk-states-for-black-friday-violence/
Curious how likely Black Friday violence will be in your state? We crunched the numbers to help you decide if you should shop from home.
November 19, 2018

Here in the good ol’ USA, we take our sales events seriously, and none more so than Black Friday. After all the Thanksgiving turkey and football, we feel justified in getting a pair of sick new kicks, that giant-screen 4K Ultra HD 3D TV, or whatever toy will be bigger than Tickle-Me-Elmo this year.

Yes, we save money at these events, but at what cost? Sometimes people take things a little too far in their quest for the ultimate holiday gift glory. We’re here to help raise awareness regarding just how cold the holidays can be when folks are unwilling to share the holiday spirit. Don’t be a Grinch out there, homies.

We took three data sets to help figure out which states have the highest likelihood of Black Friday violence this year. While we’re not saying you should bet your grandmother’s Christmas gift on this conjecture, we think we have a pretty good guess.

We based our predictions on the following:

All of the reported Black Friday incidents included were covered by the press and involved the police.

Basically, we took high violent crime rates, perceived interest in Black Friday deals, and previous Black Friday problems to find out which states may live in the deal danger zone and end up on Santa’s naughty list.

States with the highest chance of Black Friday violence

Stores that have had incidents on Black Friday 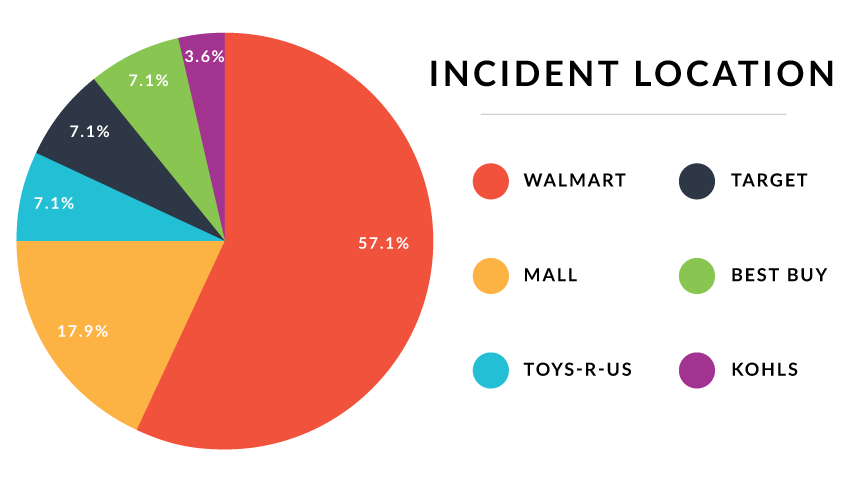 Walmart has had a disproportionate number of incidents—more than all other locations combined. This is most likely because Walmart is the largest US retailer, so they have more stores to begin with. Walmart is also known for having some of the best Black Friday deals, which makes people more competitive and, subsequently, more prone to conflict.

Still, judging by the data, even if you do live in a “risky” state, as long as you avoid Walmart, you have a higher chance of escaping unscathed. 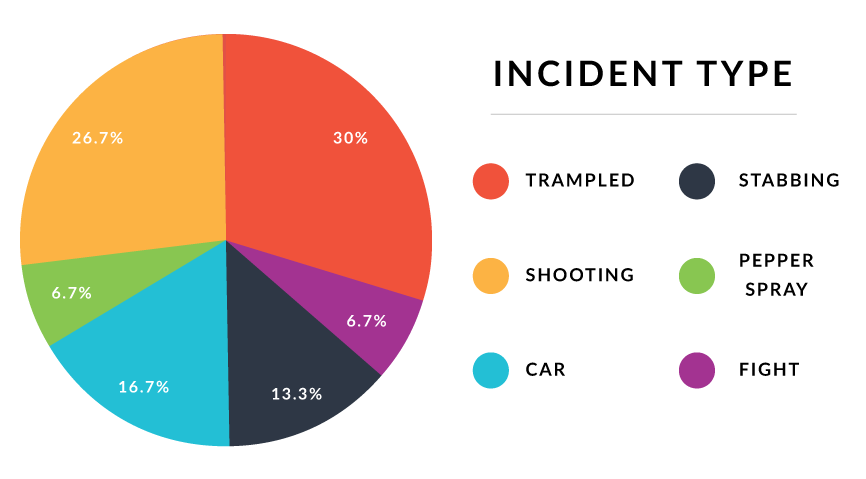 Of the incidents that have occurred, notice the most frequent type has been trampling. By the time stores unlock their doors, crowds have already gathered, ready and waiting, outside. When everyone runs in at once, of course some people are going to trip or be pushed over in the rush.

Tramplings can also occur around popular items in the store itself when multiple people vie for them at once. A dozen parents fighting over one Luke Skywalker Landspeeder is not going to end well.

Car incidents are another notable type, and the third most frequent on our list. While most of the other incident types seem obvious results of people arguing or fighting, car incidents can happen because of overcrowded parking lots combined with customers walking to and from their vehicles..

No matter where you live, everyone can take simple steps to stay safe on Black Friday. Use these five tips to get the gifts you want for your loved ones and still return home to them safely.

What stores are you going to? Which items do you want from which stores? Pay attention to advertisements and mark what items you want in advance. You’ll especially want to figure out which stores you’re going to and in what order, and how you’re going to get through them safely.

All in all, you want to have your plan memorized before you set foot outside the house.

If you’re taking other people with you, agree on a meeting place at every store you go to, just in case you get separated in the hustle. If you split up, agree on a time to meet so you’ll know quickly if something has gone wrong.

2) Carry only what you need

You don’t want to take your largest, most unwieldy purse in a Black Friday packed store. Not only will you have a more difficult time navigating through the aisles, but also you’ll have to worry about potential pickpockets who could use the crowd as a good opportunity to snatch your wallet.

Travel light, and leave the tote bag at home. You’ll have more space to carry your purchases that way, too.

Go into your Black Friday rush with a fully charged phone and emergency contacts ready to go. Whether you get separated from friends or need to contact emergency personnel for some reason, this is not the time to walk around with your phone on 20% and dropping.

If you can, carry an external charger with you. That way, if your phone does lose too much battery power, you have a backup source.

4) Leave if you sense danger

Whenever possible, stay on the outside of tightly packed crowds, and if you feel unsafe, trust your instincts.

No gift or deal is worth your life or your health. If you sense things going downhill, get yourself out of the crowd and the store quickly. Don’t fight to the middle of crowds or get yourself lost in a knot of people just to claim that discounted tablet.

If you’d rather skip the crowds, dodge the lines, and never leave your living room, you can always opt out of Black Friday entirely and embrace Cyber Monday instead. You still get some great deals, and you can order your gifts without having to leave your house.

A final word of advice…

While we don’t know exactly how the madness will go on Black Friday, we can caution you to bring your most compassionate selves when the prices are down and you’re rolling around town. People are stressed, eager, and possibly full of tofurkey and cranberry sauce—be kind out there, kids.