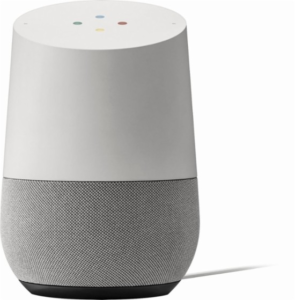 Overall Rating 4.5 out of 5
It has an answer for everything
Solid integration options
Can only sync one account
View on Best Buy
https://www.reviews.org/smart-home/google-home-review/
Read our Google Home review to see how it compares to Amazon Alexa. Includes subscription info, compatible smart home devices, and user reviews.
January 31, 2018

Voice-controlled devices are becoming a bigger part of everyday life since the rapid success of Amazon’s Echo. Now that Google has released an answer to the competition, we were curious: how does it perform? We’ve examined the functionality of the Google Home, looked at what it can and can’t do, and found what other users had to say about the device.

How the Google Home and the Amazon Echo compare

Google Home is reminiscent in many ways of the Amazon Echo. It is always listening and responds to voice commands with an activation phrase: either “Okay Google,” or “Hey Google.” A pair of far-field microphones installed on top of the device pick up your voice from across the room, even over the sound of the television or music—perfect for when you need to skip a specific track or tell your Chromecast to go to the next episode.

The audio quality is sufficient. It doesn’t sound like a dedicated sound system, but it also lacks the tinny quality common in lower-quality speakers. Two passive radiators generate enough bass to fill a room, but it’s not quite enough to power your next dance party. The Google Home is perfect for things like playing music while doing dishes or taking a shower, though.

Another great perk of the Google Home (and something the Amazon Echo lacks) is the ability to sync multiple Home units together and play the same song through them all simultaneously. While it provides the option of a pseudo-sound system, each Google Home device is $130, which gets a bit steep if you buy multiple units.

One of the major complaints about the Echo is that it plays primarily from Amazon Prime music. In that regard, Google Home has a leg up on the competition. It plays music not only through Google Play, but also from Spotify, Pandora, TuneIn, and YouTube Music. You can also tell it to play the music through Chromecast Audio. Any speaker with the Chromecast Audio plugged into it can stream music directly, which gives the Google Home a bit higher sound quality. The Amazon Echo can stream directly to Bluetooth speakers without the need for an intermediary like Chromecast, though.

Streaming isn’t limited just to music, either. You can order Google Home to play something on your living room television via Chromecast. All you would have to say is, “Hey Google, play season six of How I Met Your Mother on the living room TV,” and it will start within seconds. As a bonus, many smart TVs support HDMI-CEC, a feature that allows Google Home to automatically turn the Chromecast on when you ask it to play something. Most TVs with HDMI ports have HDMI-CEC, but it may be disabled by default. Consult your owners manual to find out how to activate it on your television.

The downside is that Google Home doesn’t have Bluetooth connectivity, so its functionality is limited to devices that directly support the Home. The biggest impact this will have is for audio streaming—users will need a Chromecast, as Google Home cannot connect directly to the speaker. However, Google Home is compatible with a growing list of smart home systems, including Nest Thermostat, Samsung SmartThings, Philips Hue, WeMo, Honeywell, and IFTTT, so the future shines bright for this device. You might start saying things like this soon:

The other use for Google Home (aside from as a speaker) is to function as a sort of personal assistant. You can check entries to your calendar (but oddly enough, you can’t make new entries) or check the traffic and weather. By accounting for traffic conditions, Google Home can tell you when you need to leave in order to make it to an appointment on time.

One of the best features of Google Home is its ability to remember your questions and learn from them. For example, you might ask, “Who is Bill Murray?” After Google Home answers you, you can ask a followup question: “What is his best-known movie?” Google Home can infer from your pronoun usage who you mean. While it’s a seemingly small feature, its ability to remember is a large step forward in more “natural” conversation. It’s hard to ask a question that Google Home can’t answer, considering that it has a direct link to the world’s largest search engine.

The Google Home website provides a huge list of features, including an alarm, games, translation features, and more. When you ask Google Home to do something it can’t, like send an email, it will respond, “I’m sorry, but I can’t do that yet.” Yet—a subtle hint from Google that more features are on the way. There are still a number of things the Home can’t do, like add something to your calendar with your voice. It also doesn’t integrate with Gmail or Google Docs—imagine if you could send an email entirely with your voice, or create a new document and transcribe it while cooking dinner. With the groundwork for these features already in place, we think it’s only a matter of time until they become available.

While no subscription is required to use Google Home, YouTube Music is unavailable without a subscription to YouTube Red. YouTube Red is $9.99 per month, and offers a free one-month trial, so you can test it out and see if you enjoy the service before committing.

Check out what other people had to say about Google Home, both good and bad. People love the Home’s integration with other smart home devices, while common complaints predictably center around the Home’s lack of Bluetooth support.

“Just going to say that Google Home is everything I was hoping it would be and a little bit more. I purposely held off from getting the Amazon Echo because it does not have the ability to cast to Google devices. I have 4 TV’s in the house and each TV has a Chromecast attached to it. As expected, Google Home integrates itself into naturally into my home environment and makes casting Youtube and music to any or all of those devices effortless with simple voice commands. Does Google Home cast everything I want it to? No, at least not yet. Casting is limited to a handful of Google apps but Google has already announced there is plans to expand on this in the near future.

“I ordered the Alexa Dot from Amazon for my husband for Christmas and we got to try it out for a month. We got tired of hearing Hum, I can’t help you with that. I returned it and ordered the Google Home and within the first few minutes we knew it was the right one for us. My husband is really enjoying the ease of asking for music and translations. We are very happy with Google Home and think everyone should have one.” — Mysin, Walmart (December 7, 2016)

“I’m writing this in January of 2017. Don’t buy this product yet. It’s not ready for prime time. All the great things Google search does — as implied by the family name — does not exist yet in this product. So there’s little value here, except for perhaps the blue-tooth speaker.” — Walmartonline, Walmart (January 22, 2017)

“There were many times google would say “I’m sorry, I don’t know how to do that” for simple requests. Sometimes she wouldn’t know the answer and Siri would. She would create a shopping list for you, but when asked to tell you what was on it, she would struggle the first few times. Maybe on the 4th ask, she would get it right. Too frustrating! She went back to Walmart after a week!” — Nikki, Walmart (December 10, 2016)

Is Google Home for You?

Google Home is primed to be a serious competitor for the Amazon Echo, but its lack of Bluetooth, Gmail and Google Docs integration, and other features puts it a bit behind the curve. The Home has laid the foundation for many of these features already, but until they are fully implemented, the unit just can’t compete. However, Google’s continued support gives this device serious potential—the Google Home is a solid purchase even now, but as time progresses and more features are unlocked, it may eventually be a better choice than the Amazon Echo.