PODS offers a comprehensive service that’s best for most jobs. But U-Box’s flexible pricing and DIY options are great for small moves.
Best for Most
Durable container design
No instant quotes
Get a Quote
Best for Small Moves
Pay-for-what-you-use policy
Only one container size
Get a Quote
https://www.reviews.org/moving/pods-vs-u-box-review/
Debating between moving with PODS or U-Box? Check out our review to see the difference between their pricing, containers, service, and more.
July 19, 2019

You don’t want to blow a whole paycheck (or two) hiring full-service movers, but you also don’t want to drive an enormous truck all the way to your new home (“Why are all these people honking at me?”). So you’re going the moving container route.

Good choice! Now all you have to do is decide which one.

We’re going to look at two of the most established moving container companies. PODS is a fantastic choice for most moves, but U-Haul’s U-Boxes may be a better option for those moving apartments or smaller homes.

Let’s put it this way: would you rather use an escape pod or an escape box?

If you’ve studied up on smart packing tips, then you know that using high-quality cardboard boxes is more important than it may seem. The same could be said for your moving containers.

You’ve probably seen PODS’ moving containers in one of your neighbors’ driveways. The containers are big, white, made of sturdy metal, and come in three different sizes.

*Available for local moves only.

If one POD isn’t enough, then you can mix and match. But beware: if you order more containers than you end up using, you’ll still have to pay for them. (And no, we don’t know why the weight limit goes down as the container size goes up.)

U-Boxes are made of wood. Sure, it’s pest-resistant. And each box comes with a weather-resistant cover. But we still feel a bit better about PODS when it comes to durability.

(If you want the most durable containers available, check out 1-800-Pack-Rat.)

U-Box only has one moving container size, which is about the same size as PODS’ smallest option. This makes them easier to handle if you decide to ship them yourself (more on that later).

PODS and U-Box are like siblings. They have a lot in common—like that they’ll drop off and ship a huge container for you—but they are not exactly the same. Here’s a look at some of the major differences.

Even though U-Boxes are a relatively new product from U-Haul, the company has been able to roll them out very fast at its existing locations. U-Haul now has more than 2,400 locations across 50 states and Canada that carry U-Boxes.1

PODS is . . . working on it. The company has locations in all but six states.

States where PODS is not available:

And PODS doesn’t ship everywhere. Even if PODS is in your state, you have to live within a certain distance of a PODS store location. So before you get your heart set on PODS, get a quote. That’ll tell you if you live in PODS’ service area.

PODS vs. U-Box packing and unpacking

Both PODS and U-Box will give you as much time as you want to pack up your container once it’s delivered. But keep in mind that you’re renting the container by the month, so if your total move time goes over 30 days, then you’re looking at a significant price increase.

PODS also offers “live loading.” Someone with a truck will bring your POD and wait for you to load it. This is great for those who live in big cities with limited parking space or for those who don’t want to be known as “the house with the metal thingy in its driveway.”

Trying to arrange the logistics of moving can feel like playing a really tough game of Tetris. The timing needs to be just right. And if it isn’t, then you might be sleeping on a blow-up mattress in your new place while your stuff is stuck in transit.

Thankfully, these companies both offer flexible storage options in case your move-in and move-out dates don’t quite line up. This isn’t the case for all container companies (looking at you, U-Pack), so we’re grateful.

Storage with both companies is free as long as it’s within your existing 30-day rental period. And you can still get access to your stuff (if you give the company some notice), so it’s basically like having your own storage unit. Nice!

Most people won’t end up with any damage to their moving containers or the contents inside. But accidents happen—fender-benders, bonkers weather events, action scenes from Michael Bay movies—so you might want to consider insurance.

U-Box offers “Safestor mobile storage insurance,”2 which ranges from $1,000 to $20,000 in coverage for your containers and the possessions inside.

Unfortunately, this insurance does not cover valuable items like art or jewelry. So if you’re looking to move your family heirlooms or your incredible stamp collection, then you might want to stick with PODS.

With most moving container companies, including PODS, you only have one choice for shipment. You have to use the company where you rented your container.

But for those with a strong DIY urge, U-Haul offers another option: haul your U-Box yourself with a rented trailer hookup. This will save you a good chunk of change, and you can even pull these small, lightweight boxes with a just a sedan. Road trip, anyone?

PODS might have a cheaper price tag, but U-Box’s flexible payment options make it a better choice for some.

Using a moving container is almost always cheaper than hiring full-service movers (though not as cheap as renting a moving truck). But that’s kind of like saying a loaf of bread is cheaper than a gourmet lunch, and more expensive than raw flour. So let’s take a closer look.

What it takes to get a quote

U-Box’s online quote system will let you choose your dates, delivery method, and insurance, and then it will spit out a number faster than you can say “Siri, call PODS moving company.” Which is exactly what you’ll have to do to get a quote from PODS.

(To be clear, you can still get a ballpark figure online, including valuable info like whether you live in their service area. But you do have to give them your email to make that happen. For a f’real quote, you gotta pick up the phone.) 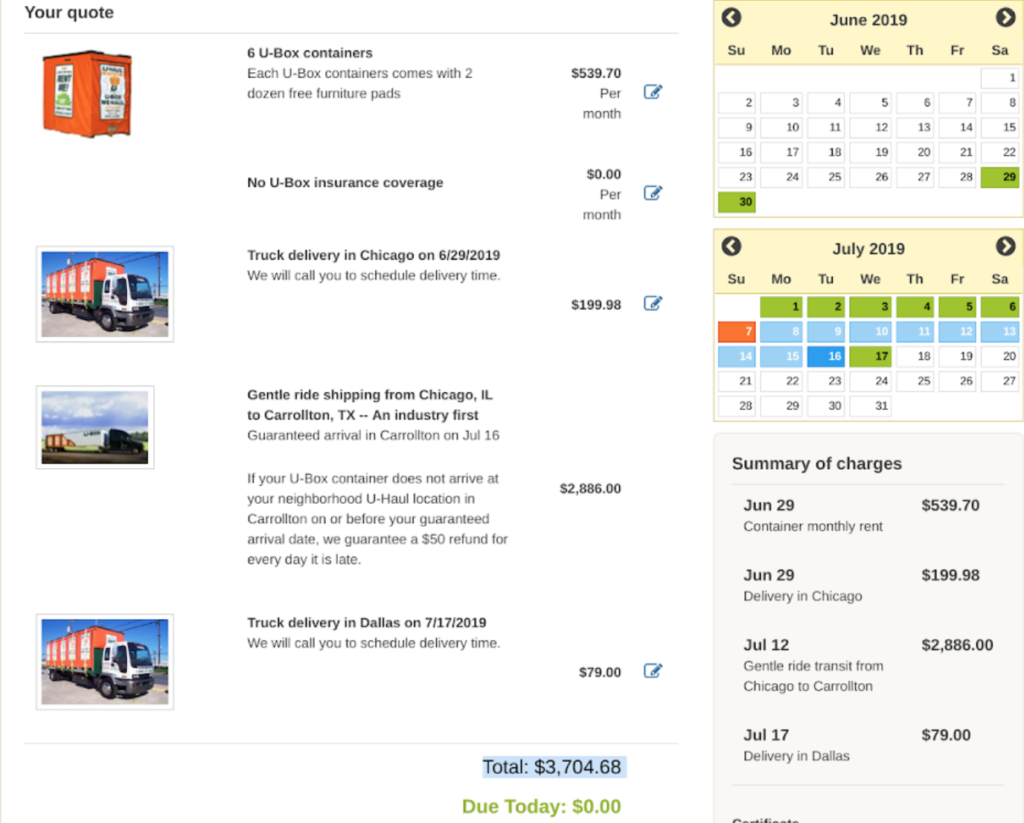 When we did call PODS, we were able to get a quote within a few minutes from a representative, but not before listening to a few sales pitches first. So you might want to practice saying this before you call: “I’m going to compare prices first, sorry.” 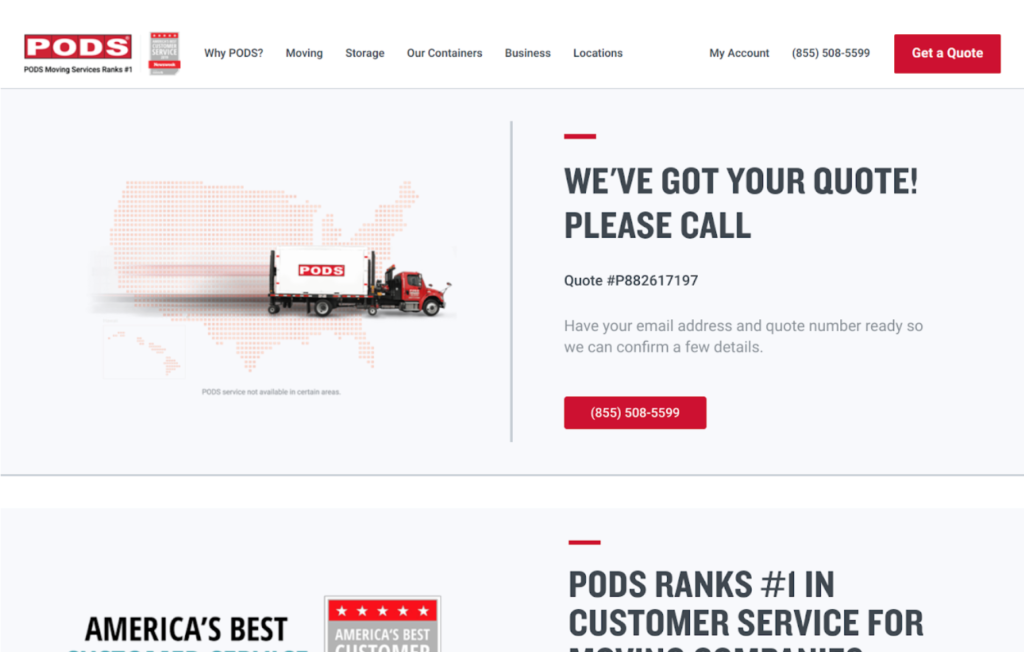 Which is cheaper, PODS or U-Box?

Your quote is definitely going to be different from the ones we got from PODS and U-Box (unless you’re moving to and from the exact same places—which would be creepy). But these sample quotes should help give you an idea of how the two companies’ prices compare.

Our sample quote from PODS

Our sample quote from U-Box

In our hypothetical move, PODS beats U-Box’s price by about $500. But that doesn’t mean that it’s always cheaper. A lot can change depending on the location, size, and date of a move.

For instance, the representative from PODS told us that our rate would almost double if we had to add another container. But with U-Boxes, that same extra container would only add a few hundred dollars to the total price.

Because of this cheap per-container rate, U-boxes are a great option for smaller moves.

Also, U-Box will charge you only for the containers you end up using, meaning that if you pack efficiently, you could end up with a little extra cash for all the important things in life (like Sunday brunch, a PS4, or an upgrade to your cellphone plan).

Most customers will get more container for their buck with PODS, but U-Box is better for small moves.

PODS tops the list of the best moving container companies, so it’s no surprise that they’re a better option for most moves. But U-Box does manage to compete by offering instant quotes, flexible pricing, and more DIY options.

Of course, the best way to figure out which company is best for your move is to get a quote from PODS and a quote from U-Box. Once you’ve had a chance to compare the two, give us a shout in the comments section. We’d love to know who’s offering you a better deal.