This no-nonsense 5G phone has a great camera that can keep up with the toughest competition.

Let's take a look at the hardware first. As a lover of all things camo, this phone is one of my favorite color options on a phone this year. Though it's still pretty slick, the back of this sage green phone has a nice matte texture to it, with a glossy, green power button. 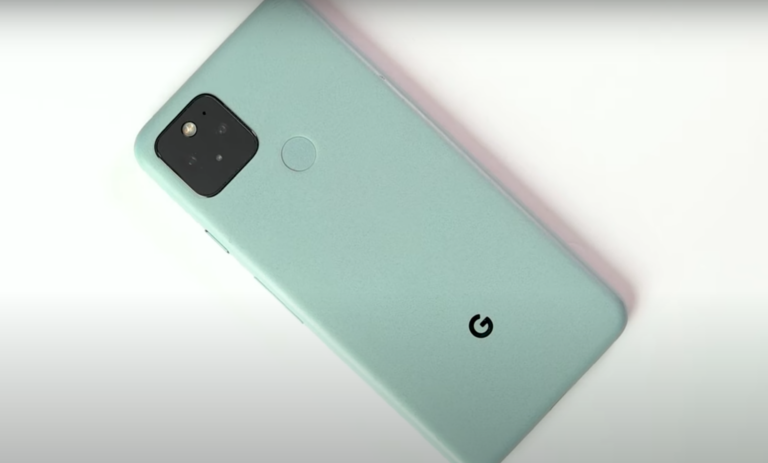 On the rear, you'll also find a fingerprint sensor, which worked very well, and you'll get a dual-camera module.

The Pixel 5 has a six-inch, 1080p by 2340p OLED display that supports HDR content. It's a good looking display with an adaptive refresh rate. This adaptive refresh scales the refresh depending on what you're doing so that your battery life is optimized. It can scale up to 90 Hertz.

Google already does a fantastic job of optimizing the software and hardware experience. Navigating around the phone is peppy and fluid on their 60 Hertz displays, but the experience is just that much better with this adaptive refresh.

Playing content on the screen is nice, but it is not the brightest screen I've looked at in recent months. For example, The Witcher looks great with regard to color and contrast, but it was a bit darker than other flagship displays I've laid my eyes on. That said, the only place you'll notice that is with content that is moody or dark, like some horror movies. Other than that, my turtle pal and his underwater friends on Our Planet look great. Other YouTube content, like video reviews, looks great too.

And while you're watching that video, you'll be treated to a solid audio experience as this phone features stereo speakers. Half of them are front-firing from the earpiece speaker grill. Audio and dialogue are loud and clear, but this phones' wireless audio options shine as well.

This may be gibberish to some watching, but the phone supports high-resolution audio codecs. So you get aptX, aptX HD, LDAC, and AAC support. What does that mean in English? If you listen to streaming services like Tidal or you have a collection of lossless audio files like my FLAC collection, you'll get most of the benefit of that file’s fidelity. It's still Bluetooth and not a wire, but it sounds pretty darn good, especially if you throw in a little accessory like the FiiO BTR3K.

And while we're talking about things that are high resolution, let's talk photography. I've been taking photos with the Pixel 5 and iPhone 12 to see how they stack up, and I have to say that there's no clear winner. In some photos, I liked the Pixel’s capture more than the iPhone 12’s, while in others, it was the 12 on top. But most of my picks were really just my preference and not based on the overall quality of the image. 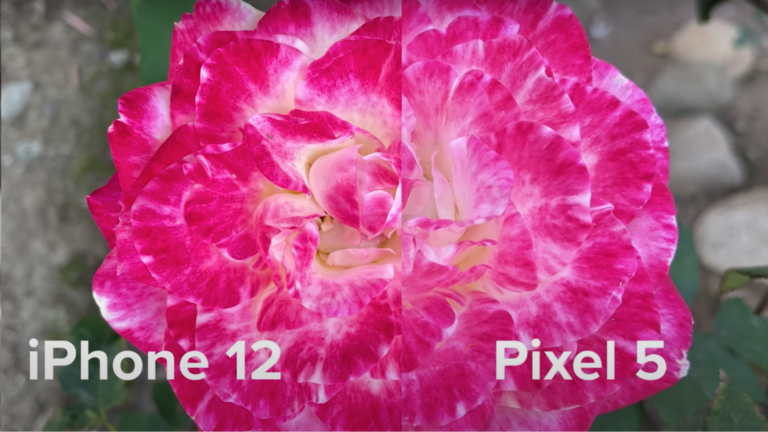 So, let's take a look at the front-facing 8 MP camera of the Pixel 5. You can check out images of my tests here, and we’ll summarize how the Pixel 5 and iPhone 12 performed below.

Overexposure: Both the Pixel and the iPhone did a respectable job, but the Pixel reproduced warmer colors with more pleasing contrast. The luminance level of the blown-out background was processed better by the Pixel.

High light: The iPhone gave me warmer colors, while the Pixel produced a flatter image with regard to color. Pixel took the prize with its ability to cut me out, and it gave me a beautiful background blur. Here, the iPhone fell short by only partially blurring the background.

Low light: Both phones did a good job, and I’d say that it’s a matter of personal preference on which is best.

Detail shot: Both cameras took a great photo, but in this instance, the iPhone 12 softens the image, but the Pixel keeps the contrast. The Pixel 5 shows the veins in the flower petals despite the strong sunlight. Now, lesser cameras would have reproduced a blown-out, red flower with blurred petals, but both phones gave me a solid amount of detail and no overblown highlights.

Night Sight: The Pixel gave me some Night Sight photos that looked as good as the regular photos with Night Sight off. The Pixel’s Night Sight functionality produced a photo that still had solid contrast, and it outperformed the iPhone 12 but fell a little behind the Note20 Ultra.

So what about the rest of the user experience of the Pixel 5?

The Pixel’s battery life was solid. In my artificial testing, I measured almost 8.5 screen-on hours with 13 hours of total use, and the battery menu was telling me that I still had roughly 5 hours of use left. With this being one of Google’s biggest batteries in a Pixel, I can definitely say that it’s a welcome improvement. And the rapid charging with an 18-watt charger definitely helps. With my use, I was never left feeling like the FOMO was going to kick in while watching a battery sit at 5%.

You’ll also get wireless charging and even reverse charging out of this battery. At 4,000mAH, I don’t know if I’d be all that enthusiastic about using the phone to reverse charge another device, but it’s all about priorities, I guess.

And let's talk speed—this is a 5G phone, after all. At home and at work, I was getting speeds typical of what I usually get on T-Mobile's network: 25 to 70 Mbps. But at my new testing location, which is 100 yards from that 2.5 GHz tower, I saw a download speed of 458 Mbps with a 88 Mbps upload speed.

Calls were clear on both sides, which is important because this is a phone.

People are keeping their phones longer than ever, and with us living in this new reality of pandemics, making a several-hundred-dollar purchase last is a comforting thing. And though we can argue that it should be longer, you’re guaranteed a minimum of three years of OS and security updates. Some phones only promise one year.

This phone does get noticeably warm after you’ve been it, gaming just using it for a period of time. This is something that people are aware of. It definitely does increase in warmth by several degrees. It feels cool right now, but if I was on it, Instagramming and Facebooking, taking photos, and a number of other things, you’re definitely gonna notice more of a warmup with this phone compared to some others.

This phone comes with Android 11, and one of the great things about it is that the accessibility features work as they should. Like I showed at my Pixel 4a's review, you're gonna get real-time phone call captioning, and you'll get translations, along with a host of other well implemented accessibility features. I have to give kudos to Google for really doing a great job on keeping those with different abilities in mind as they've developed the OS.

Recap: Is the Pixel 5 Good?

At the end of the day, where does the Pixel 5 fit into the scheme of phone products? To wrap things up, the Pixel 5 is an amazing camera that competes with phones that are double its price. It has a speedy user interface and a solid screen.

I have to say, if you're looking for a new phone, and you don't like large phones, this should definitely be among your top picks. The only thing you'll have to decide is whether the 4a or this 5 is the one for you, and that's gonna be a tough decision.

It's gonna be based on how long you keep a phone because 5G may not yet be available in your area, but if it is and you have a strong signal, then this is definitely a worthy option—though the 4a comes in at a much lower price point.

By
Brianne Sandorf
Best Home Security Systems of 2022
Whether you want a simple alarm system or a full smart home ensemble, cameras and...