Check out the smartest flip phones.

Not everyone wants a traditional smartphone. Some people don't want to spend more than $100 for a phone. Some people use phones primarily for phone calls and don't really wanna text, game, or use social media.

From the same folks who recently gave us the potentially game-changing TCL 10 devices comes the Alcatel Go Flip 3. The Alcatel Go Flip 3 is a small, plastic-body flip phone that has just enough smarts to not be considered a dumb phone, with enough ease that it isn't as much a learning curve as a traditional smartphone.

What you're getting in terms of hardware is a device with an almost 1.5-inch color screen on the outside and a larger nearly 3-inch LCD inside the phone. It's a bit grainy, but this phone wasn't built for social media picture gazing. 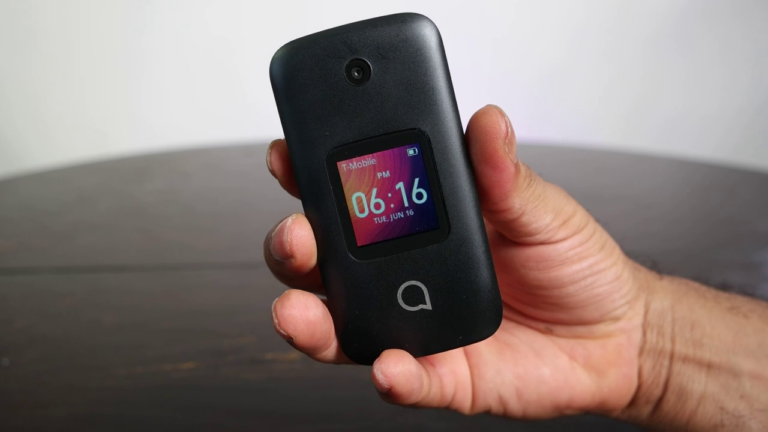 Internally, the phone has the guts to support LTE and 2.4 gigahertz Wi-Fi. If you lose the LTE signal, the phone can use 3G and 2G. The phone supports HD calling, and it sounds pretty good. I haven't been able to test it in loud, public environments just yet—thank you, COVID-19. The speakerphone is actually pretty darn loud.

The phone runs an operating system called KaiOS that allows you to connect to some smart features.

It does take a moment to boot up, but once you do, navigation is pretty simple. There's a ring at the center of the phone with an “OK” in the middle and an outer navigational ring. The lower part is your back button, and the upper left and right are your soft buttons for on-screen menu functions.

Unlike traditional smartphones, KaiOS doesn't come with a bunch of bloatware. From the home screen, you get access to four apps by default: YouTube, Google Maps, Google Assistant, and the KaiOS App store where you can go and download WhatsApp. You can access WhatsApp and other apps that aren't on the initial home screen simply by pressing the OK button.

I downloaded Facebook as well, and though I doubt most users of this phone will be accessing Facebook through it, it does work as you'd expect. It isn't terrible, but it isn't something I'd actually be using on a regular basis. I also looked at YouTube videos on the phone, and it was a surprisingly serviceable experience, all things considered. I could definitely watch videos as a time-waster on this phone with a pair of headphones plugged in. 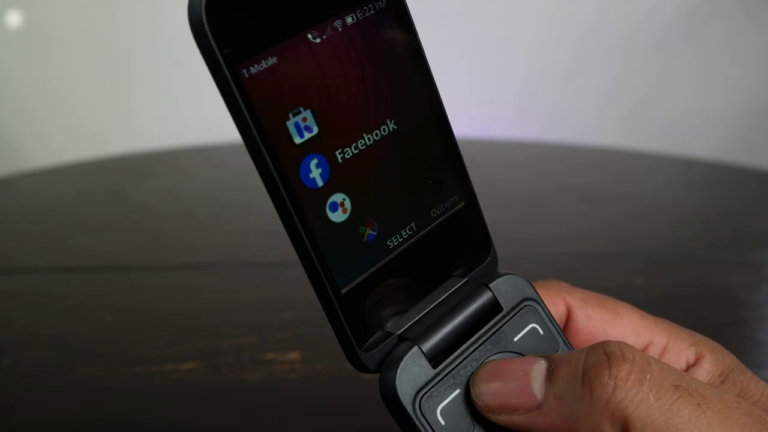 Going back to the quick settings, you'll also see things like your call log, browser, camera, photo gallery, the Google app, and more. This phone is fairly smart for those wanting a little more than a feature phone.

Voice calls and T-Mobile's network were crystal clear for me. According to callers on the other end, I came in clear as well. I'm not a huge phone caller, but the calling experience of this was loud and clear. One caveat that I’ve found to be consistent with all phones is that Wi-Fi calling, which it does support, isn't that great.

If you’re going to text message, it's old-school style with one saving grace: Google Assistant. Instead of having to triple-tap out letters, you can just ask Google Assistant to send a message to a contact.

Rounding up the features of this phone: there's a camera, and it falls firmly in the category of “potato.” But if you're feeling nostalgic about how bad pictures on phones used to look, this is definitely a trip down memory lane. The battery isn't substantial, but it will get you around two or three days of standby with several hours of talk-time.

Looking back to my early slap-style feature phones, the Nokia 3310 was one of the best I ever owned. It wasn't fancy like the gold-tone Nokia slider, and it didn't have as many features, but it did something most of my other early phones did not do: hold a signal like no other. I have favorable memories of that device and was looking forward to seeing Nokia's re-release of the phone, now known as the 3310 3G.

These devices are running that same KaiOS as the Alcatel Go Flip 3. So most of what I said about the Alcatel rings true for these.

The Nokia 8110 4G is a dual-Sim device that lights up when you open up the flip or press the power button on the side. Of course, since it doesn’t have a touchscreen, you are going to have to open the slide to interact with the phone.

One other caveat is that there are no physical volume buttons, which are a pain in the backside while you’re on calls or watching YouTube videos (which actually turned out to be a better experience than I was expecting).

The cool thing is that, much like the Alcatel phone, the Nokia 8110 4G does have some extras. The phone is equipped with Wi-Fi and is LTE enabled, so you can also use it as a hotspot. This is a GSM-only phone, so you can use it on AT&T or T-Mobile or an MVNO like Cricket or Metro PCS.

You should expect to get around four or five days of use out of the battery with heavy calling. Nokia says that the battery should last 25 days on standby while connected to an LTE network.

At the end of the end day, this is a fun device for those not wanting a smartphone and looking for a simple phone for calling only.

That said, if you are a heavy caller, you may eventually find this slide's novelty wears off if you have to move it every time you need to make a call or use Google Assistant.

At first glance, the Nokia 3310 3G may look like a nightmare of a phone that causes pocket dialing; however, the buttons and keyboard lock. They can be unlocked by clicking the center button and then the asterisk button.

Unlike Alcatel's offering, there is no Wi-Fi built into this phone, so no Wi-Fi calling either.

This phone has even less functionality than the 8110. Phone calls are clear and audible, but the camera is garbage. This may not matter to you if you’re not planning on taking great photos. Just like the other two phones, you do get a 3.5 mm headphones jack and Bluetooth for wireless headset calling.

These phones are reliable for calls and texts. They offer some smart features, but won’t replace your camera.

All in all, these are really solid phone-calling phones with a couple of extras in case you want them. Even Google Maps is available on them if you get lost and need some direction. Those directions will be a bit slow, but you'll get them, and you'll be on your way.

If you are in search of a phone, one of these may be just what you're looking for.