What Your State Is Googling from Quarantine

This is how Americans are entertaining themselves while social distancing. 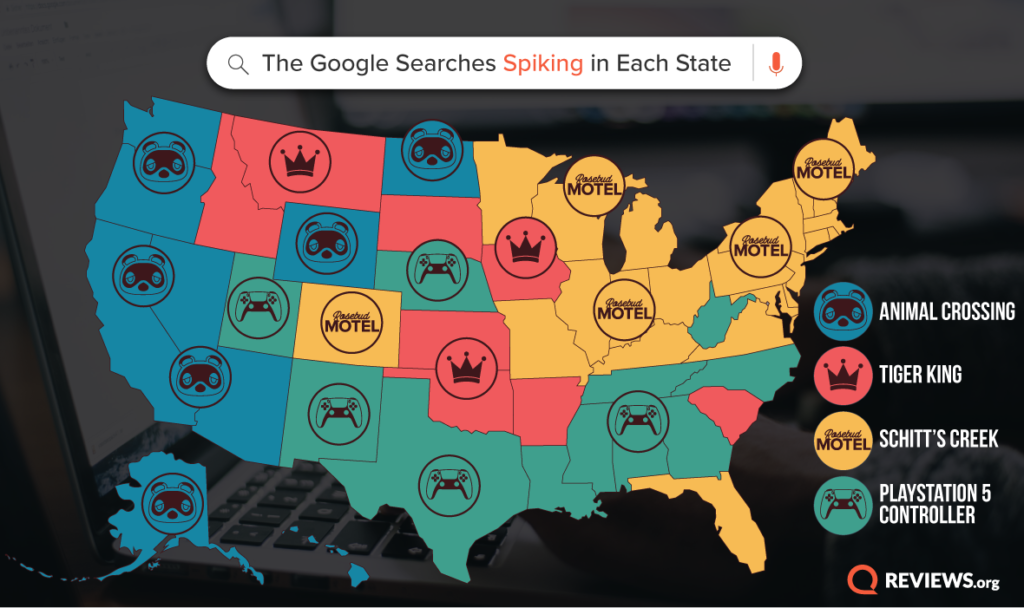 Do you wonder how other people are spending their time in quarantine? Are they also wearing the same pair of sweatpants as yesterday and bingeing Disney+ at two in the afternoon?

The answer is yes, definitely. But if they live in California or Arizona, they’ve also been playing a lot of Animal Crossing. Just look at these spikes in Google searches.

Here’s a breakdown of what people are googling for entertainment in each state. 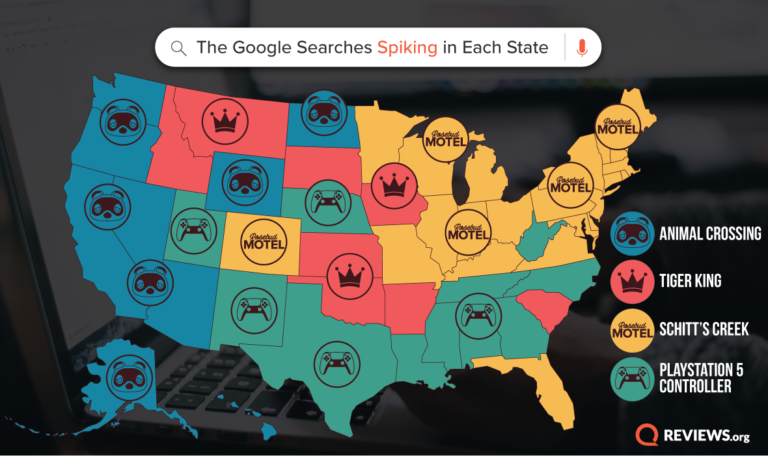 So what’s the big deal with the tiger guy? And what the heck is Schitt’s Creek? Let’s break down these search trends.

Why is the entire northeastern United States googling Schitt’s Creek? Well, it’s a show about a family that’s forced to live together and try to get along. Does that sound familiar to you right now?

It also happens to be a brilliant comedy featuring the hilarious Eugene Levy and Catherine O’Hara.

You can binge the first five seasons on Netflix (maybe make it a party with your friends?), but the sixth and final season just finished airing on live TV and won’t be out on streaming services for a little while longer.

The Playstation 5 is coming out . . . in about eight months. But that’s not stopping the entire southern half of the country from getting excited about the system.

This particular spike in traffic around the Playstation 5 is probably related to news about the new DualSense Controller. 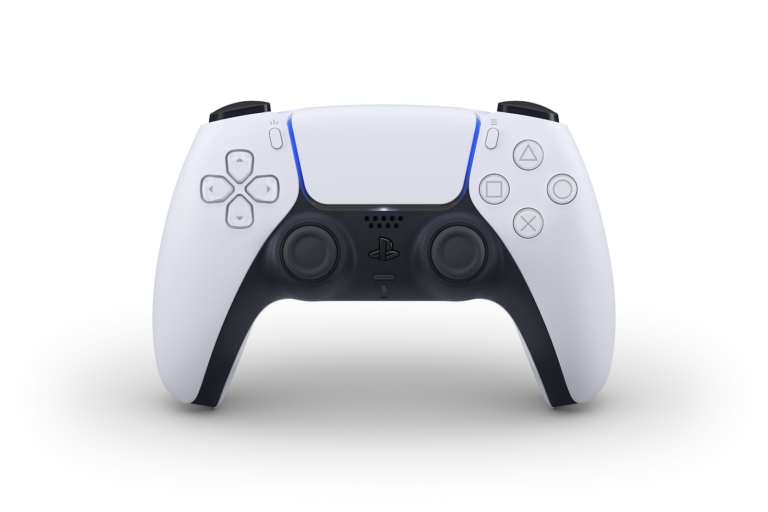 Beautiful, isn’t it? But it’s what’s inside that counts: like a built-in microphone, haptic feedback vibration technology, adaptive triggers, and tons of other fancy stuff.

You can’t buy the PS5 yet (or its controller), but you can get ready for it by optimizing your internet for gaming.

Are you sick of being stuck in your home? Well, why not be stuck on a virtual island where you can do whatever you want instead?

Seriously, in Animal Crossing: New Horizons you can go fishing, dig up fossils, and plant trees on a private island. Or you can lay on the beach and watch the stars come out. It’s up to you.

It’s not just the western US that loves Animal Crossing. The newest game in the series has already sold more than three million physical copies in Japan alone (that’s not including digital copies).

If you haven’t yet heard about the cat-loving, three-way-married, former presidential candidate named Joe Exotic, then you must have been quarantining under a rock these last few weeks.

Tiger King, the documentary that tells the wild, true-crime story of Joe Exotic and other eccentric characters, has been Netflix’s most popular offering since its release on March 20.

Even Joe Exotic’s song, “I Saw a Tiger,” has been streamed over 500,000 times on Spotify in the last two weeks! We’re guessing that most of those streams came from the middle of the country, which seems particularly fascinated by the Tiger King.

Well, no matter our regional differences, we’re united by our love for being entertained.

The team at Reviews.org used Google Trends to review top searches in the US for a 1-month span. We analyzed the queries state by state to produce a list of each state’s most-googled search terms related to entertainment during social distancing.

Is your internet just not cutting it in the age of COVID-19?

CHECK OUT THE BEST INTERNET FOR STREAMING

Looking for a way to keep your kids entertained?

CHECK OUT THE BEST STREAMING SERVICES FOR KIDS