Internet Speeds by State During the 2020 Quarantine: West Virginia

We looked at internet speed test data for 2020 so far, and here’s what we found for the state of West Virginia and capital Charleston.

West Virginia may be almost heaven with its glorious mountainscapes, but its average download speeds left a lot to be desired this year. 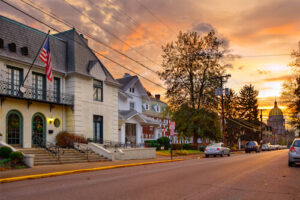 A large portion of West Virginia has Frontier as its main internet provider—but Frontier declared bankruptcy in April this year.1 Meanwhile, the entire state has dealt with unreliable internet and even a $4.7 million lawsuit against Frontier over a botched fiber network upgrade.2

So we’re not surprised that political candidates from West Virginia are fighting to declare internet a utility in hopes that will increase the number of ISPs West Virginians can choose from and, therefore, expand access.3

Additionally, Senator Shelley Moore Capito (R-W.V.) is seeking to gain up to $766 million in federal funds to expand internet access to 221,000 people living in West Virginia.4 And the city of Huntington is vying for a $2.5 million grant to create its own internet service.5

It’s pretty clear that you have to fight tooth and nail for good internet service in West Virginia.