Internet Speeds by State During the 2020 Quarantine: Nevada

We looked at internet speed test data for 2020 so far, and here’s what we found for the state of Nevada and city of Las Vegas.

The high-rolling city of Las Vegas that really brought the speed: the average download speed in September was 194.5 Mbps,—a giant leap up from 77.7 Mbps in January. This is one time we hope what happens in Vegas doesn’t stay in Vegas. 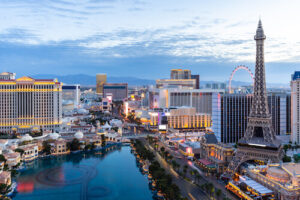 But while smaller towns, like Winnemucca, saw a big jump from 8.5 Mbps in January to  27.8 Mbps in September, that’s still not enough download speed to support a family of three or more as they work and learn from home.

Some companies have attempted to keep all of Nevada’s residents connected through programs like Cox’s Connect2Compete, Connecting Kids, and the city of Henderson’s grant for internet service, utilities, and child care.1 Even so, many rural Nevadans, like residents of Indian Springs, still find themselves relying on hotspots and cell phones to connect to the internet at 4G LTE speeds, which usually fall between 5 to 12 Mbps.2,3