Internet Speeds by State During the 2020 Quarantine: Nebraska

We looked at internet speed test data for 2020 so far, and here’s what we found for the state of Nebraska and capital of Omaha.

The capital of Omaha saw its average download speed grow from a so-so 54.5 Mbps in January to 138.1 Mbps in September. 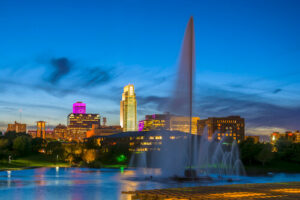 Chances are these improvements in download speed are due to Nebraskans bolstering their state’s internet connectivity through co-ops, as well as ISPs expanding coverage.

Paige Wireless partnered with the Nebraska Public Power District in late 2019 to expand connectivity across the state for internet-enabled devices, or Internet of Things (IoT).1 This is a critical task for Nebraska as 92% of the state is farmland, and IoT devices allow farmers to manage soil, water, and nutrients using real-time data.

As for residential connectivity, internet provider Windstream has worked to expand its fiber internet network across Nebraska for the past two years.2 Its fiber-based Kinetic internet service provides up to 1,000 Mbps download speeds, which would be a huge boon for any home office or classroom.