This successor to the Arlo 2 has 2K video, colored night vision, and a built-in light and siren
View on Amazon
https://www.reviews.org/home-security/arlo-pro-3-review/
The Arlo Pro 3 has a lot more features than the Arlo Pro 2, plus it has some impressive new features. But does it do everything you need it to?
June 21, 2021

The biggest downside to this camera is the cost. You need to pay for the camera, a hub, and a storage plan for complete use of your Arlo Pro 3.

The Arlo Pro 3 has pretty standard features for Arlo cameras. It’s got the company’s advanced object detection and customizable motion zones, among other things.

The camera also has a “catch” that keeps the body in place when you open the skin. 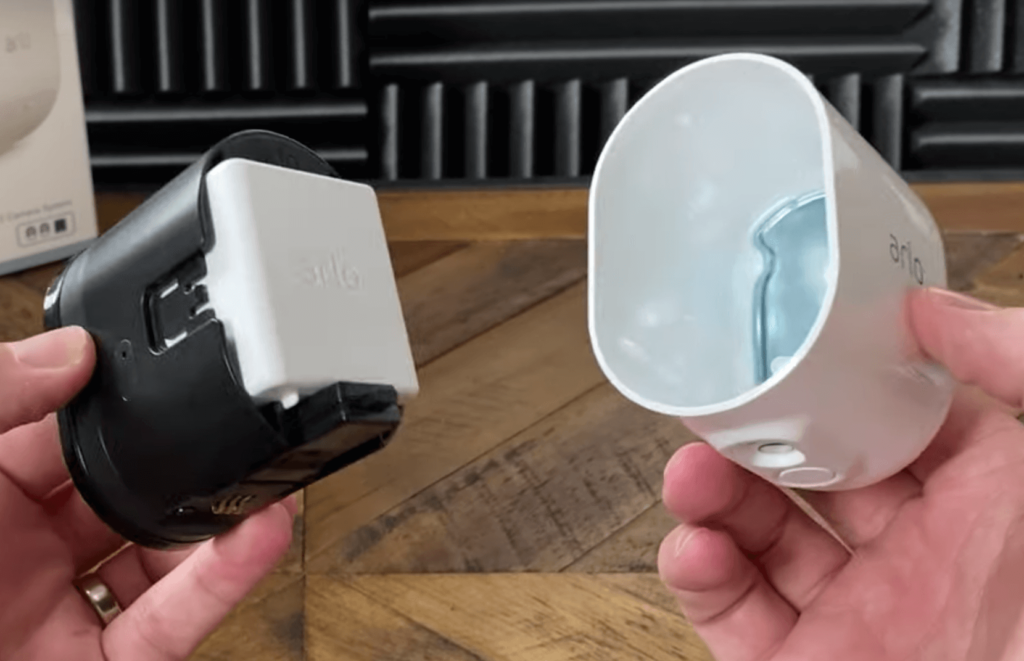 The Arlo Pro 3 Floodlight has a floodlight instead of a spotlight.
Night vision
One of our home security experts, Steve Siems, especially loves the color night vision on the Arlo Pro 3. While there’s nothing wrong with normal night vision, the color makes it easier to know what you’re looking at.

Sound detection means your camera can send you a notification or set off its siren when it hears something, not just sees something.

This is one of Arlo’s less advertised features, maybe because sound detection can be a bit chancy, especially on a camera that’s outdoors. But users can adjust the detection sensitivity or turn it off altogether in the Arlo app.

Arlo cameras are a little more costly than some

Arlo cameras don’t come cheap. They’re not the most expensive camera offering, which is a plus. Still, they are pretty darn expensive.

As Arlo releases more standalone, hub-free cameras, the prices are coming down, but not on the Pro 3. You’ll pay close to $200 even if you just get this camera on its own.

And, as we mentioned earlier, Arlo’s camera plans are definitely some of the more expensive ones out there. Even before you add continuous recording into the mix, Arlo charges more for cloud storage than Reolink or Ring.

Of course, you’re getting more with Arlo than just storage. You’re also getting access to the camera’s premium features. But on the other hand, Reolink and Ring aren’t charging extra for you to use their top features like Arlo is. They give them to you as part of the camera, which is, in our opinion, how things should be.

One feature this camera doesn’t have: free storage. The Arlo Pro and Arlo Pro 2 came with seven days of rolling cloud storage at no cost. But starting with the Arlo Pro 3, you have to get a paid Arlo Smart plan if you want to store recorded footage.

Happily, you’ll get a three-month free trial to see if the storage is worth the Benjamins. You’ll also have the option for local storage through your base station, but if you don’t have a paid plan, your footage won’t save in 2K. And unfortunately, without the paid plan, your object detection won’t work, which kinda kills the point of going with Arlo.

Arlo has one more paid plan, the Arlo Smart Elite. It’s the same as the Premier plan, but it streams in 4K and costs more. We didn’t include the Elite plan in the table because it isn’t compatible with an Arlo Pro 3.

Arlo offers quite a bit of smart hub compatibility

Arlo cameras offer smart home compatibility you don’t usually see with other manufacturers. Most Arlo cameras not only work with Alexa and Google Assistant, they also work with Samsung SmartThings and Apple HomeKit.

That means you can connect your cameras to any of the four major smart hubs for voice control and other automation. Not bad!

You can’t make any direct smart home connections, though. For instance, you can’t connect your Arlo account to any locks or bulbs and then control them from the Arlo app.

Which brings us to …

The Arlo mobile app isn’t difficult to use. We found it’s pretty easy to navigate, for the most part. Also, it’s highly rated on both Google Play and the App Store, which is a positive sign.

Installation isn’t complicated, but you have to do it yourself

This camera is a DIY device. You’ll set it up and mount it on your own.

Recap: Is the Arlo Pro 3 good?

The Arlo Pro 3 offers quite a bit

If you love Arlo cameras, then we think you’ll really like the Pro 3. It’s got all of Arlo’s signature features with an updated design.

Features: This camera has advanced object detection, sound detection, color night vision, zoom, a spotlight, and a siren. That’s just about everything a camera can offer.

Pricing: The Arlo Pro 3 is fairly expensive, but the price goes lower if you already have a base and/or a camera plan with an open slot.

Installation: You can easily install the Arlo Pro 3 yourself.

Is your house ready for Arlo Pro 3?

When you have a wireless security camera, your internet needs to be on the faster side. It’s also helpful to have a phone with unlimited data so you can easily follow up with camera push notifications.

Check out these unlimited data internet plans. They aren’t the only plans out there, but they do cover some of our top Wi-Fi recommendations.

Likewise, here are some unlimited data plans from our recommended carriers.

We try to be thorough, so if there’s something we missed in the review body, you might find it here.

Is Arlo Pro 3 worth the money?

You can find a camera that’s almost as good as an Arlo Pro 3 for less money. But if you really want Arlo’s one-of-a-kind advanced object detection, the price might be worth it to you.

In our opinion, getting an Arlo Pro 3 makes the most sense when you already have a base station. That way, you just have to get a standalone camera, not the full kit and caboodle.

Is Arlo Pro 3 worth the upgrade?

According to our security expert Mindy Woodall, if you love the latest and greatest tech, you’ll prefer the Arlo Pro 3 to the Arlo Pro 2.

We’ve broken out the difference for you, just to make it easy to see.

As we mentioned earlier, the Pro 3 also has some small design improvements for the hardware.

How far can the Arlo Pro 3 be from its base station?

Arlo says you can put its wire-free cameras as far as 300 feet (90 meters) from their hubs or base stations.

Like most Arlo cameras, the Pro 3 camera would work indoors or outdoors. However, with this expensive of a camera, we suggest putting it outside to get your money’s worth.

Which Arlo camera is the best?

The best value for your money is probably the Arlo Essential. It’s not as expensive as some of the other Arlo security cameras, and it doesn’t need an Arlo SmartHub or base station to operate.