Combo the right grip with the SteelSeries Rival 5 and you’ve got an affordable and versatile gaming mouse. 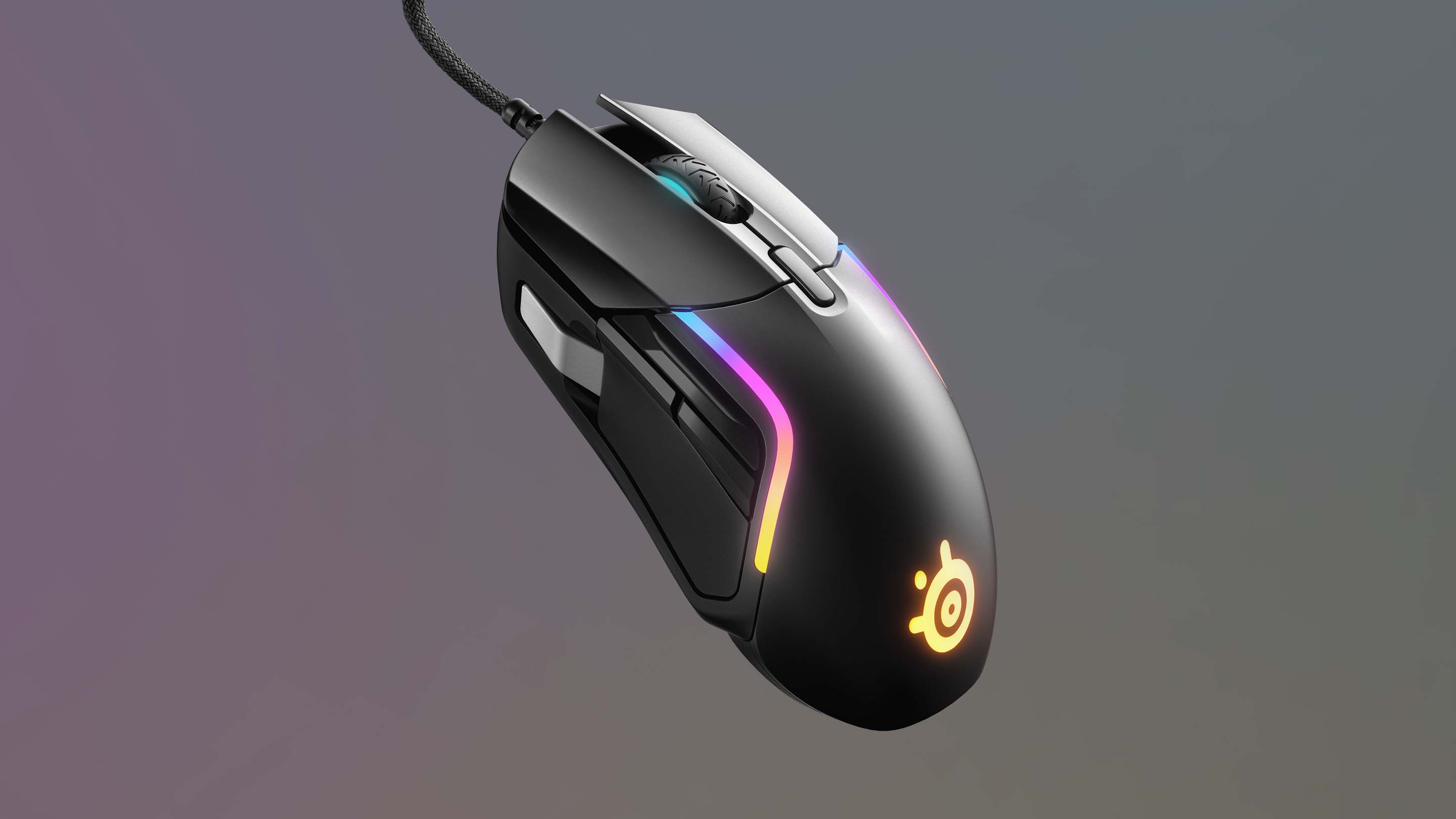 4
See it at Amazon

Even the best gaming mice tend to be either made for shooter fans or everything else. On one hand, shooter mice tend to be leaner, meaner peripherals with fewer buttons and an emphasis on accurately reliable performance and fast clicks. On the other, gaming mice meant for other genres tend to have a lot of buttons. The SteelSeries Rival 5 seeks to blaze a path between the two.

While the results aren’t as impressive as the costlier Logitech G502, the more affordable Rival 5 has an admirable crack at offering genre versatility care of a design that splices shooter trimmings with a few extra buttons. There’s a catch, though: two of those buttons are tricky to use, which isn’t such an issue for slower-paced games where you have the time to feel for them, while the other more easily accessible button will frustrate palm-grip people with longer fingers.

The real shining star of this latest SteelSeries mouse is the price, especially if you can find one for closer to $100. 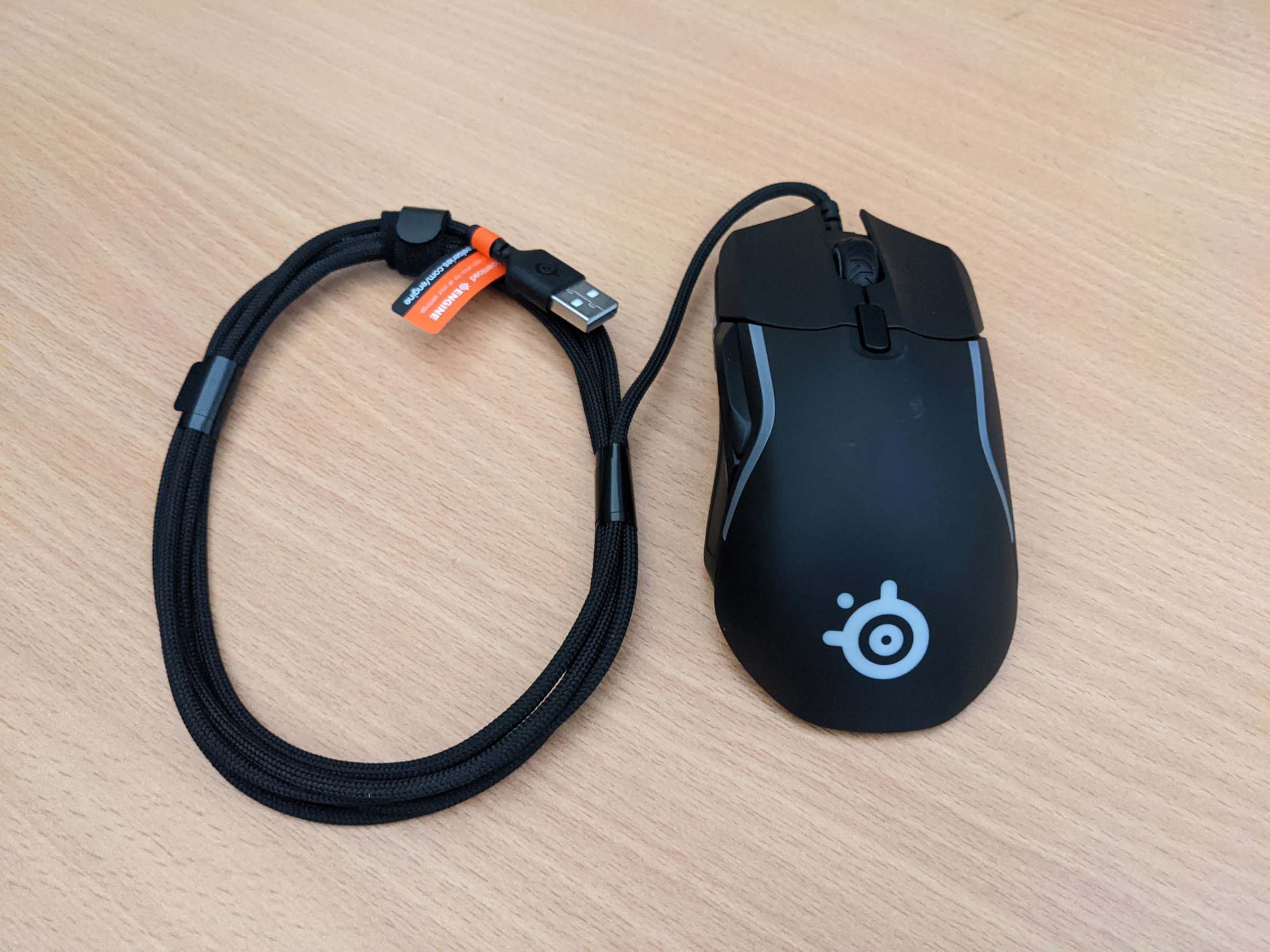 The SteelSeries Rival 5 has a $119RRP in Australia, which is a great starting price for a gaming mouse that offers this kind of versatility.

What’s in the SteelSeries Rival 5 box?

The SteelSeries Rival 5 box is light on faff but gives you everything you need to get up and going. Pop off the top and you’ll find the Rival 5 mouse sitting in supportive foam. Lift out the foam and you can unravel the cable as well as get to the basic product information documentation. 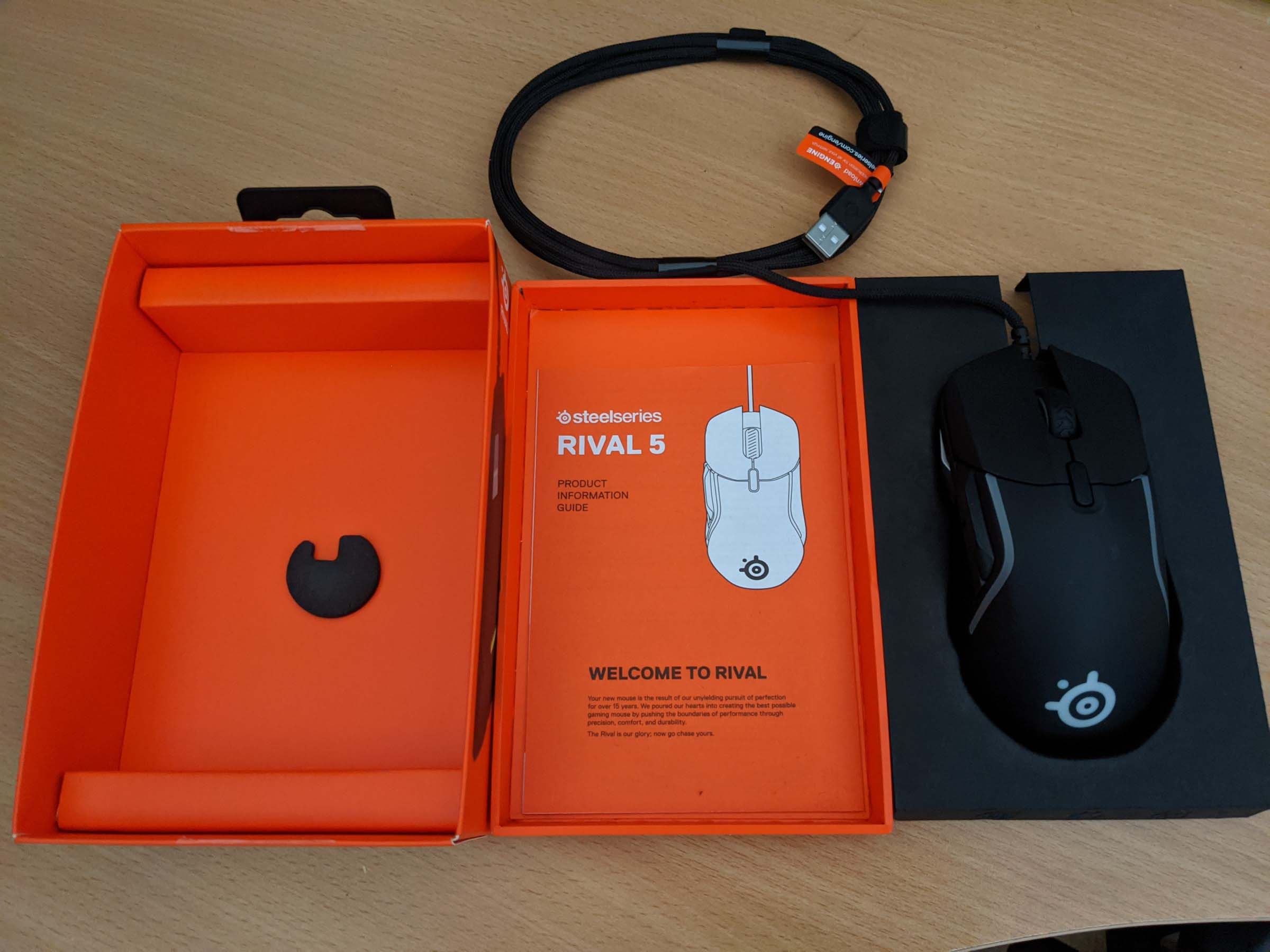 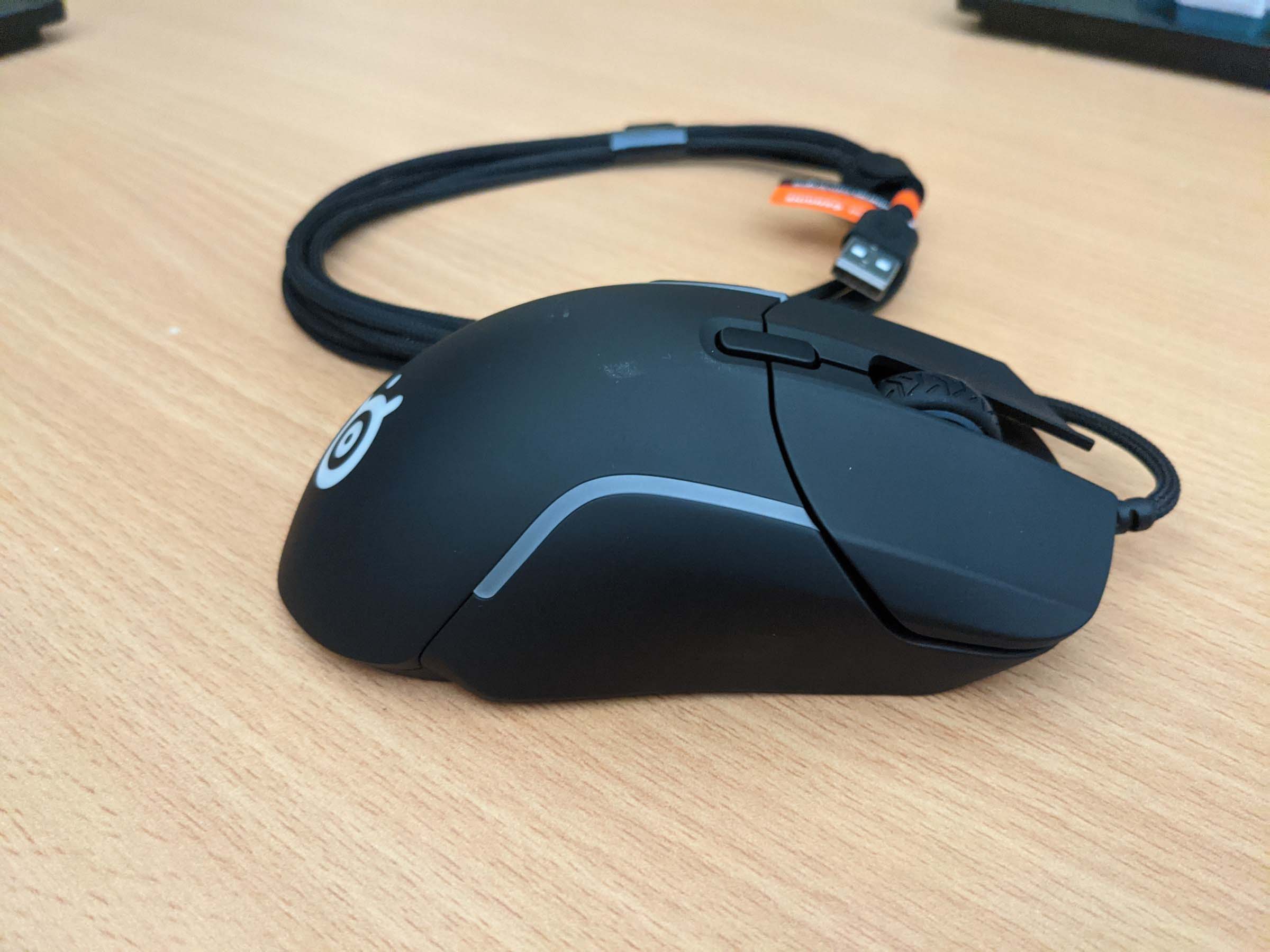 SteelSeries Rival 5 setup and everyday use

Despite the orange tag on the USB cable that encourages you to download software, you can get away with just plugging in the SteelSeries Rival 5 to get going. Even though you won’t be able to tweak some of the advanced settings, you’ll have a responsive mouse that lets you switch sensitivity care of the top-mounted DPI-cycling button.

In my experience, I needed that button every time I started or restarted Windows because the Rival 5 would frustratingly reset its DPI to the lowest setting. Thankfully, a firmware update towards the end of my testing addressed this issue. To tweak the DPI button (or any other button for that matter), you’ll want to download SteelSeries GG, which is the new version of the SteelSeries Engine.

At first glance, SteelSeries GG is a marketing tool with a home page that’s flush with SteelSeries articles to read, competitions to enter and products to buy. Click a little deeper, though, and you’ll find a neat new Moments feature for capturing in-game footage as well as the familiar SteelSeries Engine software. That’s some extra clicking to SteelEngine, though.

In terms of mouse tweaks, you can manually adjust the sensitivity hops, jumps or leaps between DPI-button clicks in 100-level increments, picking which five you fancy most, even if there’s already a good spread of options by default. For gamers, the polling rate should absolutely be left on 1000 while both acceleration and deceleration sliders should be jammed as far left as possible. Here’s also where you can also tweak the nine buttons and scroll-wheels, as well as change the illumination settings if that’s your thing.

Even with default click options, the Rival 5 is a great everyday mouse companion, reliable enough to work accurately across my three-monitor configuration and with enough buttons to rethink how to best streamline everyday tasks. 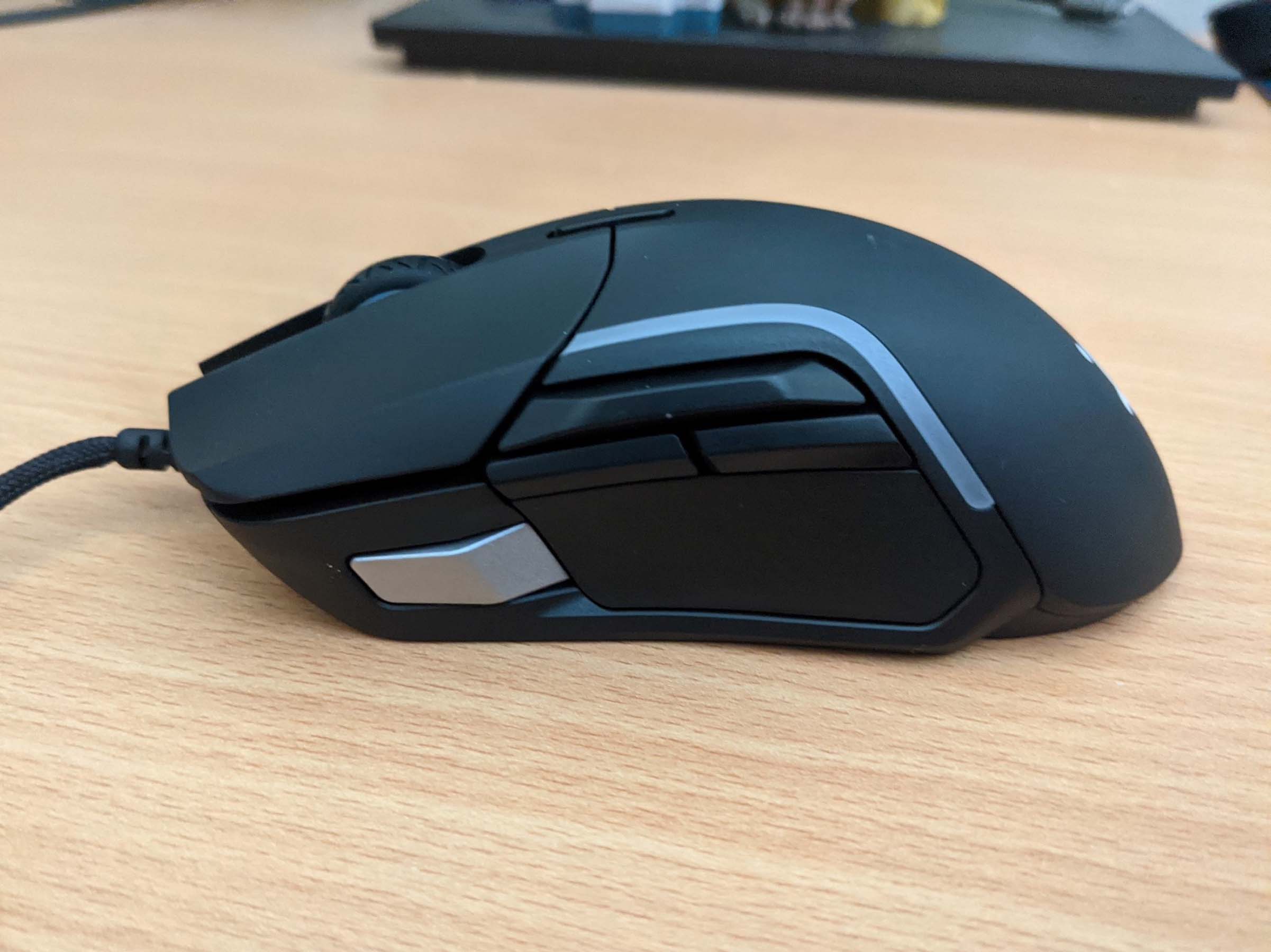 The SteelSeries Rival 5 shines as a versatile gaming mouse, but that versatility depends a lot on your mouse grip. For instance, I use a palm grip for my everyday mousing and a fingertip grip when I’m gaming. But the Rival 5 has taught me that I must have a shallow palm grip because that thumb-activated mouse button feel elusive, and that’s coming from someone with long digits.

If I adjust my palm grip by pushing my hand forward on the mouse, the thumb button becomes accessible, pressed by a slight forward roll of the thumb. Still, while I’m gaming, my fingertip grip renders this button impractically unreachable, and it’s a similar story for the dual-function thumb paddle above mouse buttons four and five.

Mouse buttons four and five are an upwards roll away from being used, which makes them as practical as they always are on SteelSeries gaming mice. But reaching the paddle to activate button six (up) and button seven (down), involves lifting my thumb, which weakens my mouse grip. Though a clever design, it also makes button six easier to function than button seven because you have to lift or roll your thumb up just to pull the paddle down.

In fairness, I’m of two minds about this. These paddle buttons are out of the way for shooter fans where they’re less important. That said, not having easy access to the three selling-point buttons (if you include the thumb one) lowers the overall value proposition for the Rival 5 depending on your mouse grip. In saying that, for less-twitchy games like Age of Empires II: Definitive Edition and Red Dead Redemption 2, having extra buttons is a gaming godsend.

When it comes to shooters, what’s more important to me than a bevvy of easily accessible buttons is overall performance, and the Rival 5 only falls slightly short with a stiffer-than-usual USB cable. Tame that in a mouse bungee and that’s less of a concern because, outside of that, the Rival 5 never skipped a beat. I love how effortlessly SteelSeries mice glide across a mousepad and I never once felt like the Rival 5 let me down on the accuracy front during my tests in Warzone and Hell Let Loose. 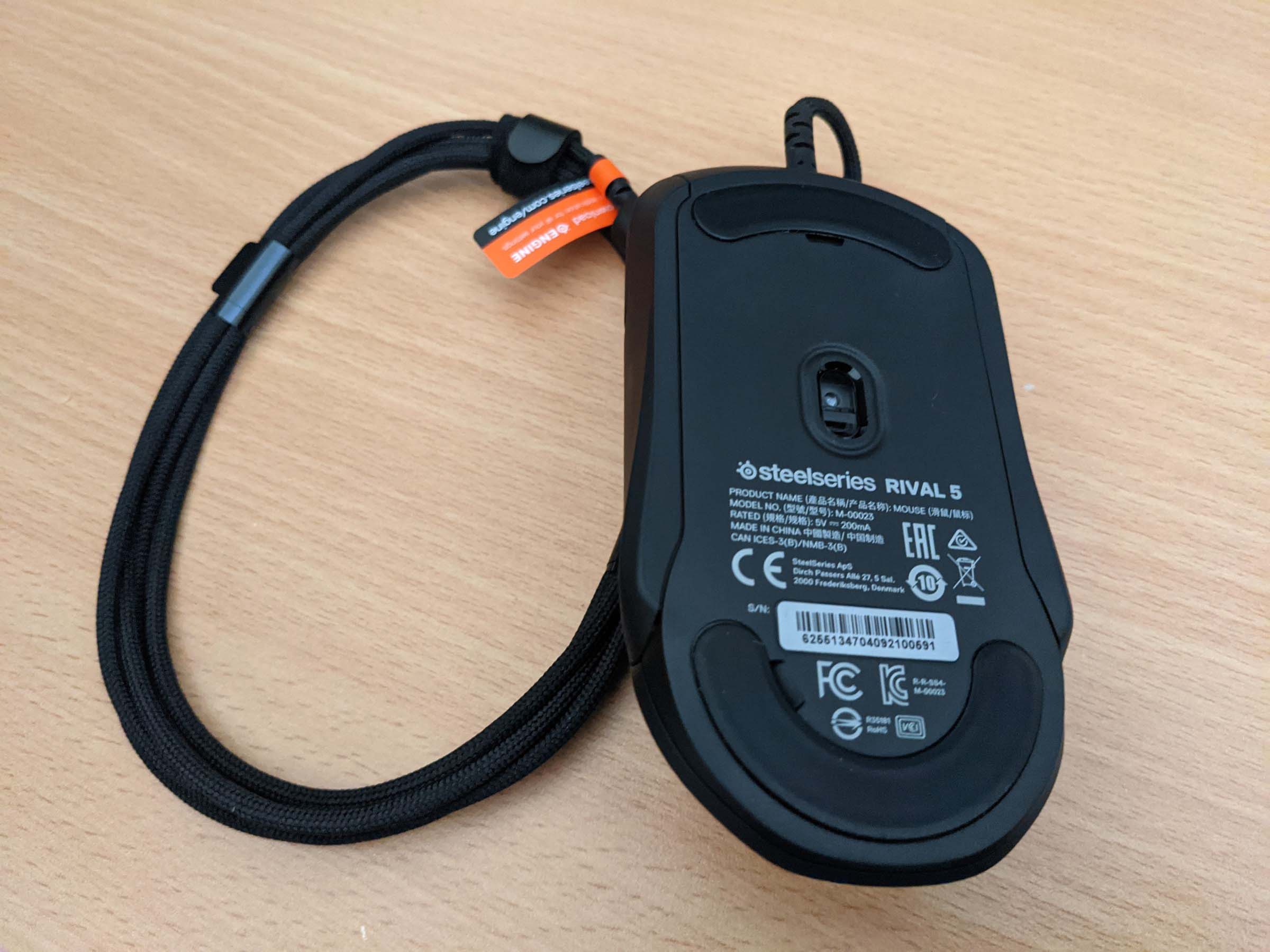 More than just wired vs wireless at stake.

There are a handful of gaming mice I could have used as a comparison for the SteelSeries Rival 5, but the Rival 650 feels the most fitting for several reasons. For starters, both mice are incredibly similar in terms of their chasses. They look almost identical at first glance, save for a flatter DPI-changing button on the Rival 5 and its extra buttons.

Speaking of buttons, both SteelSeries mice have a thumb button that I find tricky to reach with my gaming grip, though the Rival 5 offers a significantly bigger target. As detailed above, the Rival 5 also has the button paddle for two extra input options. The Rival 5 is also noticeably lighter (85g vs 121g), but that’s more personal preference than anything else (I prefer a heavier mouse, for instance).

Both mice max out at 1000Hz polling rate, which is industry standard but lags behind the 8000Hz on offer from the Razer Viper 8KHz, and despite sensor differences (TrueMove Air vs TrueMove 3+), I can’t separate the two SteelSeries mice in terms of in-hand performance. The bigger pro for anyone looking to invest in a mouse for life is the Rival 5 is rated for 80 million clicks compared to the Rival 650’s 60 million.

Gaming versatility at the right price if you have the right grip.

The SteelSeries Rival 5 is worth a look for the gamer who wants a mouse that can shift across genres and work just as well in everyday use as it does in games. It scores bonus points if you use a mouse grip that makes the additional buttons more easily accessible, but if you’re a shallow palm gripper or fingertip player like me (or claw grip, I imagine), those buttons are less practical, particularly for twitch shooters. Still, the price is most definitely right for an accurate gaming mouse that has the versatility to suit different genres and grips (even if certain grips nullify the extra buttons).

By
Brodie Fogg
iPhone 14 vs iPhone 14 Pro: Is Pro worth the extra dough?
This year, Apple has built the strongest case for going Pro yet.
By
Fergus Halliday
How to pre-order the iPhone 14 in Australia
Telstra, Optus and Vodafone all after your Apple bucks. 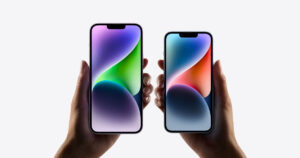 By
Fergus Halliday
iPhone 14 plans in Australia: Telstra, Vodafone and Optus compared
The cat is officially out of the bag.

By
Fergus Halliday
iPhone 14 vs iPhone 11: Is the upgrade worth it?
If your iPhone 11 is feeling long in the tooth then it might be time.