It's not going to win any beauty pageants, but it will pump fast WiFi around your house. 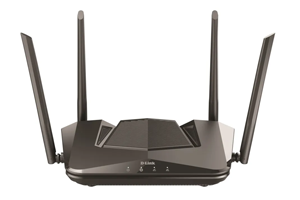 A solid performer, and mesh-ready, the AX3200 is a good choice for a WiFi 6 router upgrade.

The D-Link AX3200 delivers as expected for the price, with a relatively simple setup process and solid performance. It’s also ready to act as the centre of your mesh network, if you have other compatible D-Link network devices. It compares well to its peers and competitors, but don’t expect any killer features or surprises.

When you’re shopping for a new router for your home network you basically get to choose from two buckets of designs: large, black spidery boxes, or cute, white domes. The D-Link AX3200 falls squarely into the former category, with a glossy black plastic casing, a transformer-esque grill for heat dispersal, and four raised antennas. Like most routers, it looks like an insect stuck on its back.

Which is to say, that the AX3200 is the kind of router that you hide in the study, not the kind that you pretend is a piece of modern art on the mantelpiece.

But you’d also argue that the best routers look like this, too. Crowd favourites from D-Link, ASUS and Netgear all share this aesthetic, and the antennas are an important feature, especially if you live in a house with famously poor WiFi coverage. And all said, the AX3200 is also a bit smaller than most similar products, so it is easily hidden.

The D-Link AX3200 is a dual-band router, meaning it offers two concurrent frequency bands for sending and receiving data on, with the option to create separate networks on the 2.4GHz and 5GHz bands, or to combine them on a single network and let the router decide which devices use which band. This router gets its title from the fact that its hardware can handle throughput up to 3200mbps (or 3.2Gbps) with 400mbps on the 2.4Ghz band and 2400 on the 5Ghz band.

We found that the software smarts did a great job of putting heavy-duty downloaders, like laptops, TVs and gaming consoles, on the 5GHz band, and splitting out lower use devices to the 2.4GHz frequency.

Throughout our testing, the AX3200 has performed extremely well. D-Link promises up to 8 simultaneous streams, though I’ll admit I only have 6 devices to stream to simultaneously at home. Regardless, it definitely keeps up.

With large file downloads, like video games to an Xbox, I regularly saw speeds in excess of the 100Mbps limit on my account (thanks Aussie Broadband!).

One of the key selling points of the AX3200 is the ability to create a mesh network using it as the primary router and connecting compatible D-Link routers and extenders. I tested this with a D-Link DAP-X1860 WiFi extender (both are part of the D-Link EXO AX device range) and it all linked together nicely. Once set up, the network utilises beam forming tech so that your devices switch between the different routers as you move from room to room.

Interestingly, the various smart devices in my home worked better with this mesh network than with many other mesh systems I’ve tested recently. In my review of the Eero Pro 6 system, I briefly discussed the difficulties I’ve had using a Google Chromecast with Google TV on mesh networks, with beam forming appearing to be the root of the problems. I had no trouble with the network I set up using these devices - everything played nicely.

However, I did have trouble adding an older D-Link device into the mix. I have a D-Link COVR AX1870 router from a previous test, and though I followed all instructions to the letter, I couldn’t successfully add it to the network through the D-Link app. In fact, it ended up mucking up something in the network settings and I needed to factory reset the AX3200 and the WiFi extender and start over.

At launch, the AX3200 has an RRP of $299, and this is the price we’ve seen at major electronics stores too. Based on a comparison of similar products from D-Link and its competitors this price is exactly in line with where it should be.

In all honesty, there isn’t much difference in price between the various router models available. Pricing tiers are defined by the maximum bandwidth, and the routers delivering about 3Gbps total throughput are all priced at around $300.

Features-wise, there isn’t too much difference between the various models either. Most can be used in a mesh network, most come with the same four antenna setup and 4 Gigabit ethernet ports. The AX3200 falls short with no USB ports, though this will only be of interest to someone who plans on connecting a media server or creates and sends large backups across the local network.

Sure, why not? The D-Link AX3200 is a capable router, if mostly unremarkable. The price is right for its feature set and we found its general performance solid enough to recommend it to a busy home where it’s not uncommon for multiple people to be streaming different videos all at the same time.

The mesh networking is an excellent feature to have in a router like this, and it did work well with the WiFi extender we tested alongside it. As for our difficulty with the old router, it is hard to say where the fault lies. It is supposed to work with older models, so it is just as likely that our AX1870 is on the blink and you’d have more luck than we did.