Two OLED screens, three accessories and a ton of promise.

Lenovo's past Yoga Book laptops have been both lean and likable, but the latest flagship for the line will be the first to tout a dual-screened design.

Announced at this year's CES in Las Vegas, the new Yoga Book 9i comes with a unique dual-screened design that's not entirely dissimilar to the Surface Neo 2-in-1 PC that Microsoft announced back in 2019. The biggest difference between the two, aside from the fact that Microsoft never got around to shipping the Surface Neo, is the size involved.

Where the Microsoft-made Neo came kitted out with two 9-inch screens, the Yoga Book 9i packs in a pair of 13.3-inch ones. What's more, these screens are OLED-based with support 100% of the DCI-P3 colour gamut and a glitzy 2.8K resolution. While those high-end specs aren't likely to come cheap, they do serve to back up Lenovo's argument for this device as a portable content creation and consumption powerhouse.

Much like the rest of the Yoga lineup, the list of features here is brand-led but compelling all the same. There's a 360-degree hinge with a built-in Bowers & Wilkin soundbar plus both Dolby Atmos and Dolby Vision HDR support.

Under the hood, the new Yoga Book 9i is armed with the latest in Intel Core-i7 Evo processors. up to 16GB of DDR5 memory and up to 1TB of SSD storage. All told, the 2-in-1 PC will weigh around 1.38kg and come with a trio of Thunderbolt 4-grade USB Type-C ports. 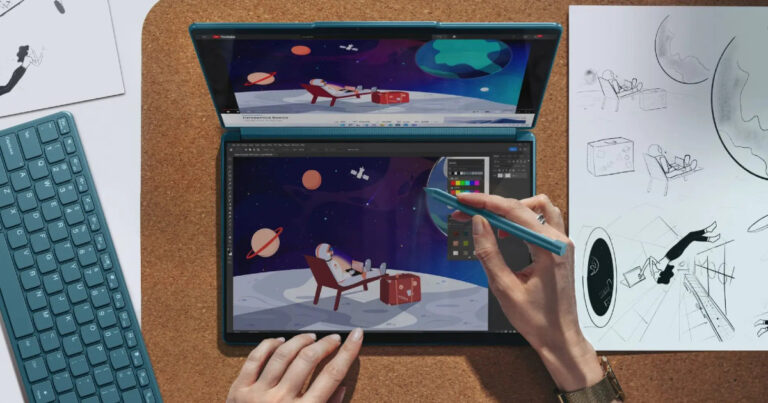 These familiar inclusions come accompanied by a trio of bundled-in ones that promise to make it that much easier to make use of the various possibilities that two screens present.

The first of these, a Lenovo Smart Pen stylus, will be familiar to anyone who has used a 2-in-1 laptop before. The detachable keyboard and folio stand serve are a little less ubiquitous but no less useful when it comes to accommodating both vertical and horizontal orientations. In terms of overall versatility, what's here feels much closer to the ThinkPad Fold X1 than previous Yoga Book devices.

According to Lenovo's vice president of the consumer segment of its Intelligent Devices Group, Jun OuYang, this bent towards letting users make the Yoga Book 9i their own is something that's been driven by new insights into the "multi-faceted lives" of modern consumers.

"We have designed the new Yoga portfolio to empower the consumers of today to achieve their goals of tomorrow. This spirit is embodied by the new Yoga Book 9i, the world’s first full size, dual screen OLED laptop which answers our customers’ calls for versatility, mobility, and performance," he said.

While the Yoga Book 9i will likely end up being a little bit cheaper than Lenovo's foldable laptop, it's still going to be pretty pricey. According to the brand, the dual-screened 2-in-1 will hit Australian shores around July 2023 at an RRP of $4,299.